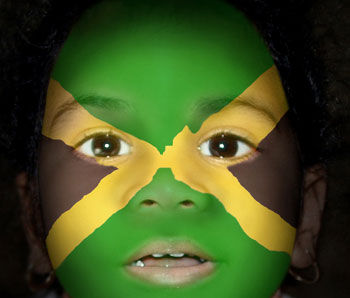 Foreigners are often startled when they hear me talk. The unmistakable lilt brands me as Jamaican, but my appearance does not fit their racial profile.

“Where are you from?” is nearly always followed by, “You don’t look Jamaican.”

True, most Jamaicans have dark brown complexions, a combination of a West African heritage and the island’s sunny climate. That brings us to one myth: people with dark skins tan, just like people with lighter pigmentation. You should see how much paler some of my friends became after living in Toronto for a while.

Historians tell us many Jamaicans are from such tribes as the Ashanti, the proudest and fiercest of West African warriors. It stands to reason that prisoners of war would make up a large part of the captives shipped in chains to work on Jamaican sugar plantations. It was customary for prisoners captured during battle to be enslaved. The Egyptians did it to the Jews, the Romans did it to other people all over Europe, and somewhere in the world someone is probably practicing the same heinous form of human exploitation right now. We just don’t hear about it.

Many owners of Jamaica’s estates were not Jamaican but British – absentee landlords. They spent part of the year on the island, but their homes and hearts were back in England or Scotland. In the days of the tall ships, a journey across the Atlantic would take months, and a land owner would be reluctant to spend all that time getting to Jamaica only to turn around and sail right back. They would spend months in Jamaica before heading home. Men being what they are (most of us, anyway); some of these landowners would establish second families in Jamaica. Their mates were invariably slaves.

To protect their children from being sold into slavery, they would declare them legally “white” – hence the expression “white-by-law.” Landowners could count on their offspring to protect their interests in Jamaica while they were back in Britain.

That would account for at least some of today’s “Jamaican white” islanders. Others, of course, are descended from colonial civil servants who came to Jamaica and founded families there. A few came from America and other countries as clergymen, missionaries or businessmen – or for some other reason.

A significant part of Jamaica’s heritage is Jewish. Sephardic Jews fled from Spain and Portugal to escape the Inquisition, and remained in the island after the British drove out the Spanish in the mid-1600s. You can see this heritage in many Jamaican surnames. One of my great-grandmothers was a Miss Salomon, a distinctly Jewish name.

With the abolition of slavery in the 1800s, large numbers of indentured servants came from India, with a sprinkling from Ireland and other parts of the British Isles. Traders from China, Lebanon and Syria (and from other countries) also migrated to Jamaica in search of business opportunities.

It’s no wonder that when Jamaica achieved independence in August 1962, our leaders chose as our motto: “Out of Many One People.”

On this, the 45th anniversary of Jamaican Independence, I would like to propose that we declare the existence of a Jamaican race. Not black. Not white. Not Asian or Middle Eastern. But simply Jamaican.

My late mother had blonde hair and blue eyes. My cousin, Kathleen, has tawny skin and black hair. Her father, a distinguished schoolteacher, had chocolate-colored skin. His ancestors were from West Africa. It would be preposterous for me to think I belong to a different race from Kathleen or her children and grandchildren. They are my flesh-and-blood.

Another cousin’s married name is Chin. Is her daughter Chinese? Of course not. Her daughter is an American of Jamaican descent.

Yes, Jamaican. We are a race apart.

We might look European or African, Chinese or Indian, Jewish or Syrian, but make no mistake: we are Jamaican. We share the indomitable pride, the intolerance of injustice, the irrepressible spirit that distinguishes Jamaicans wherever in the world our destiny sends us.

My Jamaican brothers and sisters, I embrace you on this, the month of our Independence, whether your skin is the darkest dark or the lightest light, whether your eyes are blue or green, brown or black, whatever your facial or physical features might be. We know what it is to be Jamaican. And it has nothing to do with the color of our skin.
George Graham is a Jamaican-born journalist and author who has worked as a reporter in the Caribbean and North America for more than half a century. He lives in Lakeland, Florida. His books, “Hill-an’-Gully Rider” and “Girlie: A Love Story,” are available at http://stores.lulu.com/georgeg.