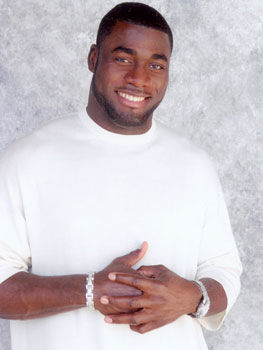 EASY DOES IT THE ‘EASY WAY’

On his first day of football practice at Everett High School in Massachusetts, Jamaican-born Omar Easy, showed up with soccer shin pads instead of a helmet. His journey from Jamaican football to American football paralleled his journey from Jamaica to America—marked with a myriad of obstacles and uncertainty. Battling undetected exercise-induced asthma and overcoming cultural hurdles, Easy pressed on to become an award winning athlete in track and field and professional football, eventually landing in the NFL as a running back for the Kansas City Chiefs. Today, the 28-year-old Oakland Raider gives back to the communities that fostered his tremendous career, with the Easy Way Foundation, helping children in those communities overcome their health and social obstacles to excel in education and sports.

MS RAINE: I see that you were Junior Olympic champion in the 100-meter-dash.

OMAR EASY: In my younger days, I was the champ for my district in the 100-meter-dash. When I went to St. Jago High School in Spanish Town, my body started to develop in a different way. I started doing more soccer and cricket, and I turned away from track and field. I really miss that aspect of my sports career. I still believe that track and field is a true sport, in a sense that it is just you against the person beside you, mono y mono. You are responsible for your victory or your loss.

Do you still run?

No. I am one of the fastest guys on the team because of my fast nature, but no, I don’t do any track and field anymore.

From Jamaica you moved to Massachusetts.

Yeah, I did track there, shock put, javelin, and the hundred meters when I was in Boston. I actually made it to the State Championship as a hundred meter runner.

When did you switch to (American) football?

Like I said, my body started to develop in a different way, so I started playing American football in high school in Massachusetts

You also played at Penn State.

Yeah, I played football at Penn State. It was easy to loose focus, because, you know, you play football and people treat you special and it could make you think that you don’t have to work hard because people give you things; but because of my background I kept focus and really got into myself and worked very hard, at school and at football.

Now, with your history in athletics, it is hard to imagine that all those years you had asthma; it went undetected or unnoticed—

In Jamaica, you don’t really get tested for things like that. I would play soccer every Sunday morning before church and in the afternoon, and I would always get out of breath really fast. One Sunday, it scared me so bad, I thought I was going to die. I couldn’t breathe at all. I really didn’t know it was asthma. It is called exercise-induced asthma. It’s not like asthma where you are always wheezing and have to be rushed to the hospital. It doesn’t bother me unless I am running or playing soccer for a period of time. It was hard for me to even detect that I had that problem.

Even now, when I play football, I get tired faster than the others around me. Even in college, I was in a big football program, so they really make you work hard. I struggled with my condition. I couldn’t figure out what was wrong. They sent me to the doctor and he diagnosed my condition. My lungs were only pushing out half the amount of air as the next person. Can you imagine? I was working just as hard, if not harder, than the man next to me, and I am only getting half the amount of oxygen. They had to put me on medication to open my lungs, before I start doing activities.

So you started the Easy Way Foundation—

–for children suffering with asthma—

Is it based here or in Jamaica?

It’s based in Boston, Mass. It is a project that is really dear to my heart because of my situation and because of my sister who used to suffer from chronic asthma, as did my other brother. I try to be really involved with it. It’s about educating younger kids about what they need to do to prevent an asthma attack, and what to do when you have an attack. I donate pumps for kids in high school in the nurse’s office. If they are having an attack, the nurses are equipped with pumps. I am trying to spread it out here (Oakland). I really need to get something happening in Jamaica, because the situation there isn’t half as good as it is here. It would be a great thing for me to help out there, because a lot of children don’t get diagnosed and just don’t know they have asthma. They could potentially die from it without being properly educated about asthma.

When did you start it?

About how many children has the Foundation helped?

Well, it is hard to put a number on it. Last year, we donated over $10,000 to clinics in the Everett, Boston area. The money went to different things. We target kids who need education and counseling. In the clinics that the funds went to, the counselors weren’t getting paid to work very long. Some of that money went into hiring the psychologist for extra hours to make them more accessible. These kids were either abused, or their parents were on drugs, a lot of different problems, and they needed to have counseling, to have help. Every year in the middle of May, we have a banquet to raise money for these and other programs to benefit the kids. Me and some teammates do football activities with the kids, you know, to help them feel worthy and wanted.

You have gotten quite a bit of recognition for your good work. There is an Omar Easy Day in Everett, Massachusetts.

(Laughs). You can say that, it is kind of a two day deal—

(More Laughter). One day is for the kids. There is the banquet, for the adults. The next day is dedicated to the kids, doing fun activities with the kids.

I hear you have an autobiography coming out.

I can’t really speak on that, because everything is not set in stone yet.

In your life story, or in your life rather, what are some of the issues that you have had to deal with as a Jamaican in American sports?

(Laughs). Well, my first thing was adjusting to the weather in Boston when I first got there.

I can imagine, it’s freezing up there.

Yeah, dealing with the climate change, was tough, with the snow and everything. It was a lot for me to get used to. Another thing was that the schools in Jamaica were stricter education-wise. When I first came here, they didn’t understand that what I learned in Jamaica, they hadn’t started teaching yet. I was far advanced. Mentally I wasn’t challenged for like a year or more. I had to make my brain slow down, to get on the same page with my classmates.

Besides that, adjusting to Americanized football, as you know in Jamaica football is soccer, was different. Especially playing in college, it made me realize that sports in America are really a business, as opposed to just playing for fun. You are out there playing football, but you are bringing in so much money to the university. It is amazing. It is a lot of pressure. In Jamaica, I didn’t really have to deal with that, I always excelled in whatever sport I chose. But up here, the pressure makes the competition a lot tougher. I had to get used to that. I adjusted though. As Bob Marley used to say, you gonna get tired of seeing my face, but you won’t get me out of the race. (Laughs). I always go back to that saying when I am competing. That experience has made me always make sure that I am mentally stronger than I am physically to really excel.

Imagine that some of your teammates, especially out in Kansas City, and in Oakland aren’t very familiar with Jamaican culture and people. There are very few Jamaicans in those cities.

Well, in Oakland—I kinda want to talk about Oakland since Kansas City and Oakland are rival teams—the guys are very curious. Guys will ask me about certain things, especially music, they always ask questions about reggae music. I explain what this means or what that means. Other guys will poke fun at Jamaicans, at the way they talk. It’s not that they are making fun of us, but it’s that they are so intrigued by us, the culture, the music, the language, that its like they wish they could speak or do things that we do. They are mostly optimistic about learning more about Jamaica and Jamaicans.

Last question. I see on New Year’s Eve, you are coming to my side of town and playing the New York Giants. (Laughing) How feel about that, nervous? Scared? Shaking in your football cleats, huh?