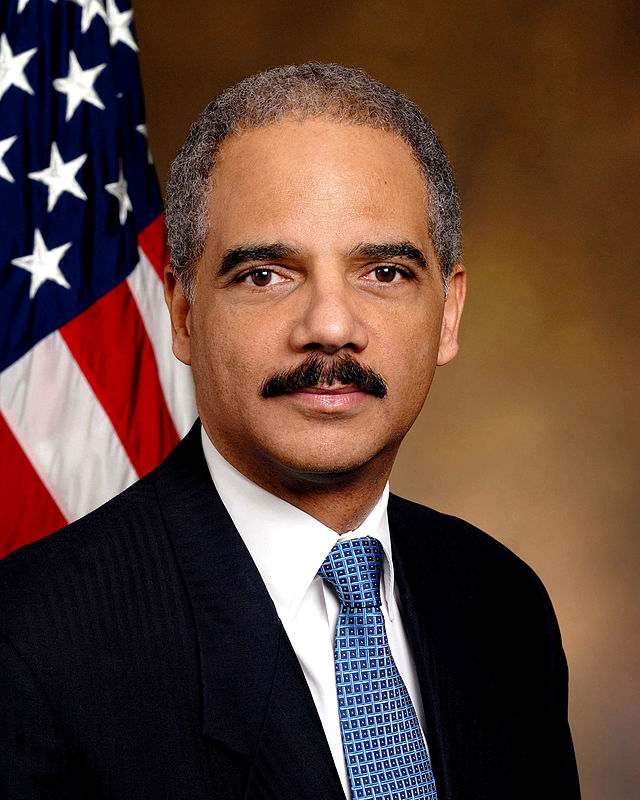 Eric Himpton Holder, Jr., was born in New York City to Bajan parents. His father emigrated to America at age 11 and his mother’s parents were from St. Philip, Barbados. Eric attended Bedford-Stuyvesant High School where he played basketball and earned a Regents scholarship. He then earned an undergraduate degree in American History from Columbia University and later a Law degree from Columbia Law School.

While in Law school, he clerked at the N.A.A.C.P. Legal Defense Fund and the Department of Justice’s Criminal Division. Upon graduating, he moved to Washington and joined the Department of Justice as part of the Attorney General’s Honors Program. He was assigned to the newly formed Public Integrity Section in 1976 and was tasked to investigate and prosecute official corruption on the local, state and federal levels.

Eric Holder was the first African-American ever to serve as U.S. Attorney for the District of Columbia. He was nominated by President Reagan in 1988 to become an Associate Judge of the Superior Court of the District of Columbia. Holder was also the first African-American to hold the position of Deputy Attorney General during the Clinton administration. He was unanimously confirmed for that post by the Senate. Before being confirmed as President Obama’s Attorney General, Holder was a partner at the Law firm Covington and Burling LLP.

Holder was nominated by President Barack Obama as the 82nd Attorney General of the United States and took office on February 3, 2009 and he is the first African-American to hold the position.

While attending Columbia, Holder spent time in his Harlem neighborhood helping kids at the youth center. He joined the Concerned Black Men, beginning his lifelong role mentoring youth, and is still an active member.
In May 2008, while still in private practice, Legal Times magazine named Holder as one of the “Greatest Washington Lawyers of the Past 30 Years,” describing Holder as one of the “Visionaries.” Also in that year, Holder was named by the National Law Journal as one of “the 50 Most Influential Minority Lawyers in America.” The National Law Journal commended Holder’s practice in the areas of civil litigation and white-collar defense, as well as his work as a national co-chair for Obama’s campaign.

In June 2009 the Government of Barbados announced that it would begin a project to determine the first 100 Great Barbadians which would be selected among the public of Barbados. At the announcement of the project it was announced that Holder was the first candidate to be nominated toward the final list. In August 2012, the National Urban League named Holder as a recipient of their “Living Legend” award along with singer Stevie Wonder.