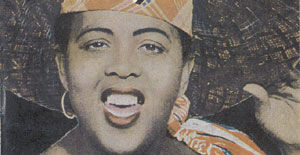 Three days to the annual Jamaican Day Celebrations in Toronto which is in recognition to Jamaica’s 44th year of Independence, the inevitable conqueror of life snatches Miss Lou from our midst. {Sighing} “Haw mi bwoy, Miss Lou kick the bucket, noh so life go, wa fe do?” and that is how she would aptly have put it. She had lived in Canada since 1987 and died here at the Scarborough Grace Hospital on July 26th at the age of 86 just hours after collapsing at her home.

Miss Lou has now left us with undoubtedly the greatest legacy of Jamaican culture and heritage in her poems, folklore and songs… “Sinting wi really really proud ha han appreciate and ha go chat bout for generations to come.” If Marcus Garvey taught us what it meant to be “Black,” it was Miss Lou who created in us what it is to be Jamaican.

The awards and accolades bestowed upon her during her lifetime are far too many to be listed, but among them is the Jamaica Order of Merit (OM) which is the third highest honor of the land for her distinguished contribution to the Arts and Culture of Jamaican Society. Miss Lou also had received an honorary degree from the University of Toronto back in 1998. She was indeed the Cultural Ambassador of Jamaica.

In tribute to Miss Lou Jamaica’s Consul General of Toronto Anne- Marie Bonner said, “Through her courage, she gave a nation a language and a voice with which its people can express her culture. It was not an easy task in those days to challenge the status quo in such a profound way. But this “tallawah” woman did it. She has contributed to our culture through folklore and acting.”

At the Jamaican Day Celebrations in Toronto held Saturday July29th, Reggae’s Superstar Leroy Gibbons paid tribute to Miss Lou by asking the crowd to join with him in a moment of silence which was very well received and revered. Upon completion he belted out the song, “Missing You” changing the words to fit the passing of Miss Lou which transformed the gathering to a jubilant flag waving, nationalistic sway of pride and glory.

Apart from her stories and comedies, poems and songs, Miss Lou’s attire was one that was symbolic to African-Jamaican tradition… giving us an identity. Just like the Revolutionary Hero Che Guevara wearing his red-star black beret, Miss Lou always wore her “trademark” head wrap and dress in the tradition of an African-Jamaican garb, much to our delight and appreciation.

As for us Jamaicans living in Canada, we will miss her dearly and perhaps more so than anyone else as she was always a part of our community; always present at a Jamaican event serving as a staunch reminder that within this marginal society, we still can and must maintain our identity, our culture and our heritage. What greater moral persuasion can there be than one to remain true to their roots. Thank you Miss Lou. Your memory will live on much longer than the people who knew you and for those abroad your poem, “ No Lickle Twang” will keep us smiling all the way during our flight back a yard.

Me glad fi see yuh come back, bwoy,
But lawd, yuh let me dung
Me shame a yuh so till all a
Me proudness drop a grung.
Yuh mean yuh go dah Merica
An spen six whole mont deh,
An come back not a piece better
Dan how yuh did go weh?
Bwoy, yuh no shame? Is so yuh come?
After yuh tan so lang!
Not even lickle language, bwoy?
Not even lickle twang?
An yuh sister what work ongle
One week wid Merican
She talk so nice now dat we have
De jooce fi understand?
Bwoy, yuh couldn improve yuhself!
An yuh get so much pay?
Yuh spen six mont a foreign, an
Come back ugly same way?
Not even a drapes trousiz, or
A pass de riddim coat?
Bwoy, not even a gole teet or
A gole chain roun yuh troat?

Suppose me laas me pass go introjooce
Yuh to a stranger
As me lamented son what lately
Come from Merica!
Dem hooda laugh after me, bwoy!
Me couldn tell dem so!
Dem hooda seh me lie, yuh wasa
Spen time back a Mocho!
No back-answer me, bwoy – yuh talk
Too bad! Shet up yuh mout!
Ah doan know how yuh an yuh puppa
Gwine to meck it out.
Ef yuh waan please him, meck him tink
Yuh bring back someting new.
Yuh always call him ‘Pa’ – dis evenin
When him comes seh ‘Poo’.