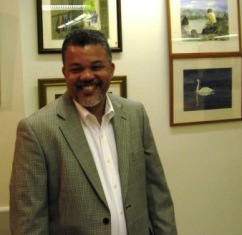 This week we have conversation with Jamaican author & blogger Geoffrey Philp. He is the creator of the premier literary blog on Caribbean books, authors and literary events. This Jamaica College alumnus is the author of a novel, Benjamin, My Son; two collections of short stories, five poetry collections and a children’s book. His work has been anthologized in both the Oxford Book of Caribbean Short Stories and the Oxford Book of Caribbean Verse.  He is the recipient of numerous awards, including an Individual Artist Fellowship from the Florida Arts Council, the Sauza Stay Pure Award, James Michener fellowship at the University of Miami, and an artist-in-residence at the Seaside Institute.  He will be featured author  the Jamaicans.com  sponsored Anancy Festival on  June 26th, 2010.

Where in Jamaica are you from?
I was born in Kingston at St. Andrew’s Hospital and I grew up in Mona Heights.

Please tell the audience of the high school you went to in Jamaica?
I went to the best high school in Jamaica. Here are a few hints: it is located on Hope Road, we have educated several prime ministers, and our motto is Fervet Opus in Campis.

What were some of your fondest memories of JC?
The memories are all blurring now. It was so long ago! What I do remember was the uncertainty of that first day walking past the chapel, being put into Murray House, which created a rivalry between me and one of my best friends from primary school who was put in Hardy House, and then, the growing camaraderie from first through sixth form, especially on those evenings in September, playing in a football match and looking up at Long Mountain and knowing these would be the best times of my life.

How did the school prepare you for you career?
I had some of the most compassionate and astute teachers at JC. They really grounded me and gave me the intellectual foundation for my vocation. Dennis Scott, my literature teacher, noticed my talent as a writer and helped me to get my first poem published in The Daily Gleaner. I was paid the princely sum of £8.

Tell us about your blog?
Geoffrey Philp’s Blog Spot serves as a platform for my books and the works of other writers from the Caribbean and South Florida. I write several posts per month, but I am also pleased with the guest posts of several writers such as Opal Palmer Adisa and Heather Russell.

Why did you start the blog?
I started the blog because my daughter, who is very wise, told me that I should be blogging. I then discovered blogs by Nalo Hopkinson, MadBull, and other Caribbean bloggers and thought it was an excellent medium to discuss ideas about which I cared deeply.

Did you envision your blog would become one of the premier resources for Caribbean books?
I went to JC. We only expect excellence! I say that half-seriously. At first, I had no idea what I was doing. I only knew that I wanted the blog to be, as Seth Godin would say, “remarkable.”

At what moment did you realize that your blog had “arrived”?
I guess it was when I was complimented by the African American scholar, Houston A. Baker Jr.,  who said that my blog was a treasure and that I should continue with the “fine work” that I was doing.

How much time do you spend blogging each week?
I spend about two hours each day working on the blog. However, if I am working on a poem, the time spent on blogging decreases. For although in some circles I am better known as a blogger, my first love is poetry.

Has it taken away from your writing?
Blogging is writing. It’s different from poetry, short stories, or novels, but it has its own form. Some ideas are meant to be explored by blogging, some with poetry, and some as a story. What drives me nuts is when I see chopped up prose passing as poetry. They are distinct forms and each has its own value.

Compared to 10 years ago do you think Caribbean books and authors are getting more exposure?
Yes, and I think it is wonderful. Look at the web sites for Peepal Tree, Macmillan, or Akashic. They’re all publishing talented authors like who happen to be from the Caribbean.

How has the internet and self-publishing helped to increase the number of Caribbean books being published?
There has definitely been an increase in self-publishing and writers who have been rejected by New York publishing houses have turned to sites such as Lulu.com or Create Space to publish their books. This is a good thing. You see, New York has one idea about the Caribbean and we have our own. Sometimes, the ideas meet. But sometimes they don’t.Pirates of the Caribbean is a good example of an idea that doesn’t match our vision of ourselves, but one that New York and Hollywood continue to perpetrate. The sad thing is that we support these films while all the while singing Bob Marley’s “Redemption Song”: “Emancipate yourselves from mental slavery…”

Do you think we as Caribbean people appreciate our great authors?
I think we do. I also think that we can broaden our appreciation not only for the well-known authors, but also for authors such as Kellie Magnus, Joanne C. Hillhouse, and Joanne Gail Johnson who are writing children’s books. We can always make room for more.

What is your involvement in Calabash?
There are book fairs and there are book fairs, but Calabash is an experience. I’ve taught poetry at Calabash workshops and I read a short story, “The Day Jesus Christ Came to Mount Airy,” from Who’s Your Daddy? And Other Stories at last year’s festival. It was one of the highpoints of my career. I’ve given readings throughout South Florida, the States, the Caribbean, and UK, but reading in Jamaica to over 3000 people, my people. C’mon, it doesn’t get any better than that!

Last year’s Calabash was almost cancelled due to the lack of sponsorship. Any ideas on how this event can be sustained in the future from the threat of cancellation?
From what I’ve learned Calabash has received several grants which should get them through the next three years and they’ve just published a book, So Much Things to Say, and the proceeds go to the funding of Calabash. If you buy the book, not only will you get a poetry anthology by some of best writers in the world, but you will also be helping with a righteous cause.

Apart from appearing at the Jamaicans.com sponsored Anancy Festival in June 9, what projects are you working on?
I’m working on a new book, Anancy’s Christmas Gift. It’s my adaptation of the folk tale of “Anancy and Sorrel.”

Tell us about your forthcoming book of poetry titled “Dub Wise”?
Because I am part of the “Reggae Generation,” the poems in Dub Wise (and I think the emphasis should be on Wise) are reflections on being a father, husband, lover, writer, son…the many roles that I have incorporated into my life. The book also extends the Jamaican/Caribbean literary tradition and includes tributes to writers such as Anthony McNeill, Edward Baugh, and Kamau Brathwaite.

What type of books do you enjoy reading?
Good books. Right now, I’m reading Sections of an Orange by Anton Nimblett. It has several stories that will leave you saying to yourself, “Don’t cry. Is only a book. Is only a book.”

If you were on a deserted island and could take one book what would it be?
Escaping a Desert Island for Dummies.

If you could take one person on the island who would it be? (Better say your wife)
Hmmm, let me see… (pause). My wife? If I don’t write any more books you will know why.

Thanks for the spending the time with us for this interview.
Thank you for giving me this opportunity.