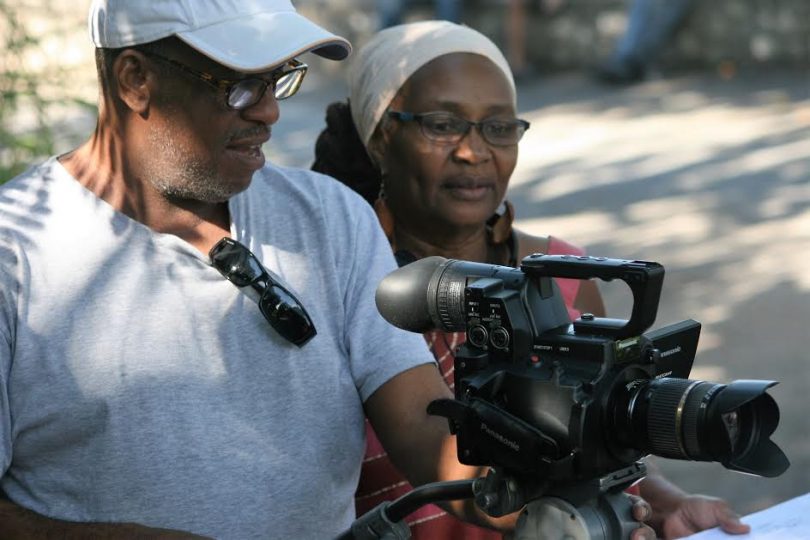 We recently caught up with Jamaican filmmaker Janet Morrison as she was getting ready for the Palm Bay Caribe Film Festival. At the festival she will be showcasing her film “Silent Hearts” which was written and directed by her and produced as a part of the Jamaica Film & TV Association’s (JAFTA) Propella Film Program. Here is our conversation with Janet Morrison.

1. Tell us about the film “Silent Hearts”.

A Jamaican schoolgirl from a rural town is abducted by two men in a taxi on her way home from school with a friend. A businessman whose car has broken down and a roadside vendor witness two separate moments of the abduction. The film explores the thought processes of these two witnesses as the crime happens and the terrible consequences of their actions.

The film interrogates the silence that surrounds the terrible violence against our women and children which has escalated in recent years and the society’s often “soft” response to it. From the film Silent Hearts

2. Is this a Jamaican movie or a movie with Jamaicans?

Both. It’s a Jamaican movie with a universal theme. There are many other countries going through the same thing.

3. Is the movie based on a true story?

The true stories of sexual violence are all the same. Only the details change. The movie speaks to the environment that enables many of these stories.

4. Has the film been screened by an audience yet?

Yes. It premiered at the Trinidad and Tobago film festival along with the four other JAFTA Propella Films and was screened at film festivals in South Africa, the 2017 Bermuda International Film Festival, and will be screened in the film segment of the Milton Keynes Film Festival in the U.K. and our own Gatffest Film Festival here in Jamaica. Of course Palm Bay is next, very excited because of the number of Jamaicans in Florida, so hope they will support.I have also done some smaller group screenings where we are able to discuss some of the implications of the subject matter.

5. How will the movie be distributed? Are you currently working on getting it in theatres?

I really made my movie as a behaviour change communication tool rather than a professional calling card. This is not to say that one negates the other, but I am concentrating on it being seen as widely as possible in Jamaica to bring attention to these insidious crimes. Hopefully people will wake up to take action or even question their own actions as it relates to the issue. So right now I’m making it available to small NGO’s, schools, community based organisations and groups where we can have conversations and perhaps discuss solutions. With respect to international distribution, once it has finished the Film Festival rounds I’m happy to just put it on You Tube and let it go from t,here while still having it as a key card when I’m making pitches.

6. Tell us about some of the talented actors in the film? Many of them are Jamaican…right?

They’re all Jamaican. The two schoolgirls are Nardia Scott the lead and Jhada -Ann Walker both members of the Jamaica Youth Theatre (JYT), a group which uses drama to bring awareness to social issues and effect change, particularly among young people. They are extremely talented young women who definitely have a future in theatre and film if they want to. Interestingly enough the Executive Director of the JYT, Aston Cooke who plays the Thug in the movie is one of Jamaica’s well known theatre practitioners and is a writer, director and actor.

The only other known actor in the movie is Damion Radcliffe, who is a talented young theatre actor, director and writer as well. The remaining cast members were plucked out of the air so to speak. My own husband, Roy Morrison who plays the Newspaper Vendor, the Thug’s Driver Runaco Madden who is a friend of ours and my physical trainer, Joyce. When you’re on a low budget you get very creative. Gve thanks to all of them and especially the totally Jamaican crew as well who made it possible by working for “little and nothing”.

7. What is your next project?

Well, in 2012 I won the BBC International Radio Playwriting Competition with a play called “The Fisherman” www.bbc.co.uk/programmes which deals with the same theme of exploitation of young women, in this case it revolves around the sex trade here and the abduction of our girls into the international sex slave trade. The setting is where you least expect it in a small idyllic tourist town. At the end of the recording of the play, the BBC producer turned to me and said, “this would make a great movie”. It was the same thing that had been running through my mind, so having batted it around for a bit, I am now halfway through the screenplay. I’m also hoping to publish a book of four children’s stories in which the heroes are children with disabilities. The stories won the Jean D’Costa Award at the Lignum Vitae Awards of 2015 so I really need to get that done as well.

8. What advice do you have for young filmmakers?

Don’t be afraid to follow your instincts. Make sure you are passionate about the story you’re telling. Never just do it because…. And get a good writer….if you’re not great at writing. It all starts with the writing. You don’t have to do everything. At the end of the day it will still be your film.

9. Your favorite Jamaican food is…?

A good snapper steamfish with veg and crackers. I could seriously eat that morning , noon and night.