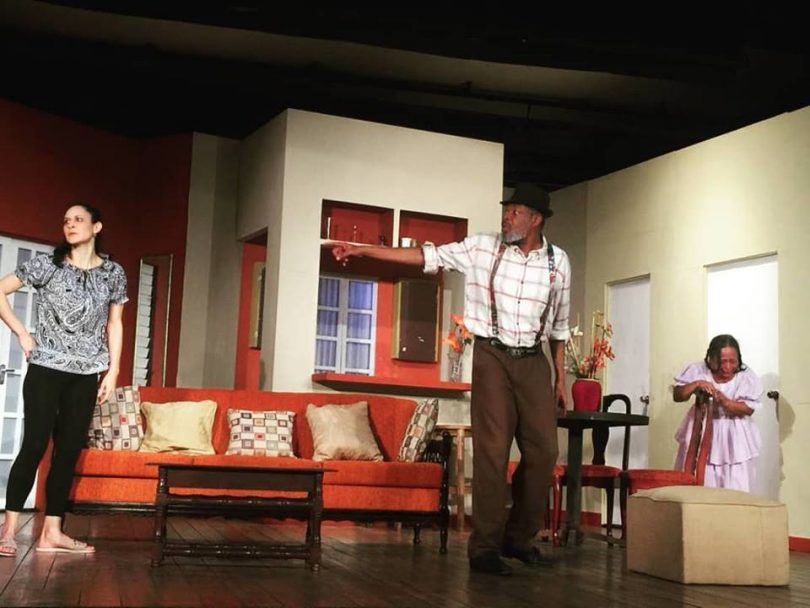 Elder abuse is not something to laugh at, but in Basil Dawkins’ play Maas Mat Comes to Town, the painful subject is presented in an almost palatable manner.

With an outstanding performance by Ruth HoShing, who portrays a wily mother slipping in and out of dementia. There are times however, when her cunning manipulation leaves the audience wondering whether she is in the throes of progressive dementia or using her wits to ward off the abuse from an only child.

Although there are only three performers on stage, Earl Brown as Maas Mat, Ruth HoShing as the elderly mother and Maylene Lowe as the selfish and abusive daughter – the play moves along with no lull in the action unfolding. Each performer brings a level of skill and nuance to their role that melds and blends to form a delightful but thought provoking piece of comedic drama, which may sound like an oxymoron but in reality it is not. In Jamaican society laughter abounds as do harsh words and abuse, murder and other heinous acts. The buttress for lack and a less than perfect lot in life is the laughter that brings relief and some respite. Under the direction of the New York-based Caribbean Cultural Theater creator, E-Wayne McDonald, an everyday story unfolds of a selfish and shallow daughter, abused by a father who doubted her paternity and a mother who went along with the wishes of her domineering husband.

The Maas Mat in the title is an old family friend who visits from the country and provides comfort and company together with a cessation of the abuse, but just when it seems there will be a happy ending, Maas Mat dies. Whether through imagination, wishful thinking or reality, it is the spirit of Maas Mat that then appears -to add another level of depth to the play. The daughter finally confronts the mother and some semblance of redemption is achieved. As the daughter ponders the dilemma of whether to leave the country with her now reconciled husband or stay and cement a relationship with her mother who now needs her care, it is the mother who solves the problem with a selfless act.

I attended The Little Little Theater on Tom Redcam Avenue in Kingston on a night when the theater was sold out and the audience was extremely appreciative of the themes explored – I suggest you definitely check out this play if you are looking for a more cerebral theater experience.