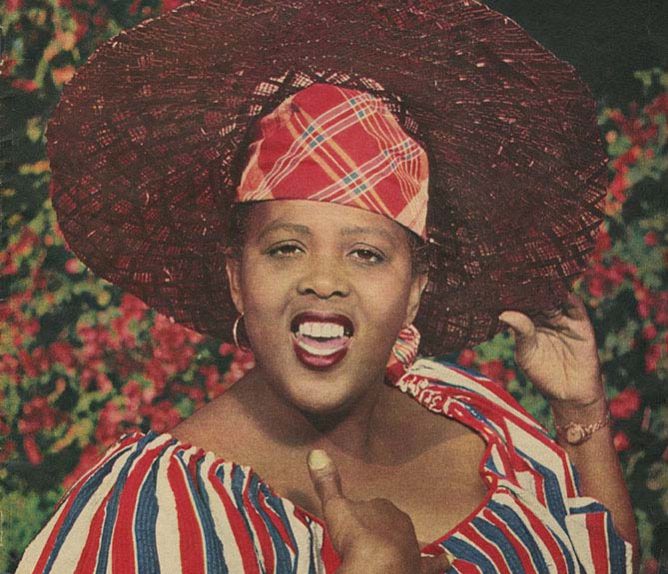 Date of Birth (DOB): 9/7/1919
From: Jamaica
Best Known for: Patois Poetry, Folklorist
Biography: The Hon. Louise Simone Bennett-Coverley is quite possibly Jamaica’s most loved Folklorist, Writer, Artiste. Miss Lou, as she is affectionately known, received her education from Ebenezer and Calabar Elementary Schools, St. Simon’s College, Excelsior College, Friends College (Highgate). She was a resident artiste from 1945 to 1946 with the “Caribbean Carnival”. She has appeared in leading humorous roles in several Jamaican Pantomimes and television shows. She has traveled throughout the World promoting the culture of Jamaica by lecturing and performing. Although her popularity is International, she enjoys a celebrity status in her native Jamaica, Canada and the United Kingdom. Her Poetry has been published several times, most notably Jamaica Labrish-1966, Anancy and Miss Lou- 1979. Among her many recordings are: Jamaica Folksongs-Folkways 1953, Jamaica Singing Games- 1953, Miss Lou’s Views-1967, Listen to Louise-1968, Carifesta Ring Ding-1976 The Honorable Miss Lou-1981, Miss Lou Live-London-1983 and Yes Me Dear-Island Records. She has been married to Eric Winston Coverley since May 30, 1954 and has 1 son and several adopted children. She enjoys Theatre, Movies, auction sales and continues to reside in Kingston. On Jamaica’s Independence Day 2001, the Honorable Mrs. Louise Bennett-Coverleywas appointed as a Member of the Order of Merit (OM) for her invaluable and distinguished contribution to the development of the Arts and Culture.