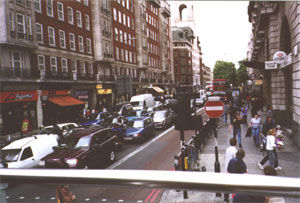 London is described as a ‘melting pot’ an appropriate description due to the plethora of cultures found in England’s capital city.

London is pretty much unaffected by weather patterns, but for visitors April until October is normally the most pleasant time to visit, even though English weather is famously unpredictable!

London holds true to its image as a bustling metropolis and you will find there are many forms of transport to help to navigate your way around the city. World famous double decker buses, black taxis, trams and the Tube are only a few of the many forms or transport available. Buses run 24 hours to all destinations within the capital. Renting a car would not normally be a good idea, due to the extortionate parking charges and the ease of traveling via public transport.

London offers restaurants specializing in food from the most obscure cultures, you will be amazed at the choice! Clubs abound, as do theatres, casinos and live nightlife. A popular guide to nighttime entertainment is ‘Timeout’ which can be bought from most newsagents.