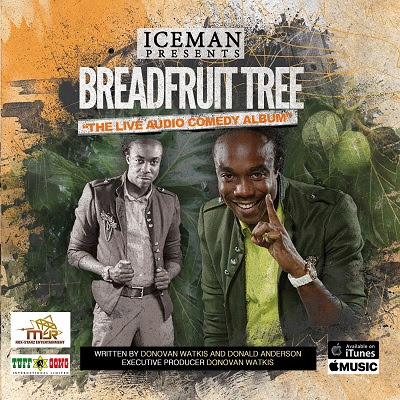 Tuff Gong International is pleased to announce the digital release of “Breadfruit Tree” by the amazingly talented Donald ‘Iceman’ Anderson.

‘Breadfruit Tree’ is a fifteen track comedy compilation chronicled by Donald “Iceman” Anderson that takes the listener through the hilarious life of Caribbean nationals and their day to day local and international travels. ‘Breadfruit Tree’ features spoofs, improvisations and impersonations that are spot on. The album features an all-star parody cast, all played by Donald “Iceman” Anderson. It is written by Donald Anderson with JR Watkis of MJR Productions as executive producer.

Iceman first released the ‘Breadfruit Tree’ Album with the aim of getting a distribution deal. After releasing the album in Jamaica, the album is now available in the United States, U.K, and other markets on iTunes, Amazon, Google Play and Spotify by way of distribution through the Bob Marley Group owned Tuff Gong International Label.

According to Executive Label Manager of Tuff Gong International, Myshjua Archibald, “Comedy is an integral part of the Jamaican culture. It’s exciting for us to be working with Donovan and Iceman to showcase another genre of our entertainment industry on the world stage. In addition to their creative talents, they have a solid business model for presenting comedy across multiple formats simultaneously that works well for digital marketing. But most importantly to me is that Breadfruit Tree is FUNNY!”.

Executive Producer, Donovan Watkis added, “We decided to craft a whole new niche for this project. Iceman is a unique artiste with many talents. We have been searching for a distribution deal and we found the perfect Partners in Tuff Gong International. Tuff Gong has opened up our marketing potential to every corner of the Earth.”

He continued, “This is the first project out of the partnership and we will be releasing at least two more over the course of the next year. The album is unique in form and flavor, Iceman cleverly blends his standup up comedy routines on tracks to give audiences the rich imagination and humor one would expect from a comedy album. it is a digital release for a digital age and not so digital age. Music and spoken word albums are now being consumed mostly via the web and on mobile devices. With the help of Tuff Gong International, we at MJR Productions are able to offer the breadfruit tree for the picking in all the digital stores.

Iceman also weighed in on the release “I am extremely excited about the digital release of Breadfruit Tree. To see it come to life on the international scale is a dream come true for me and I am ready to do my part to move it even higher up the success ladder. I’m grateful to MJR, TGI and UMG for the effort thus far. Thankful, Happy and Humbled.