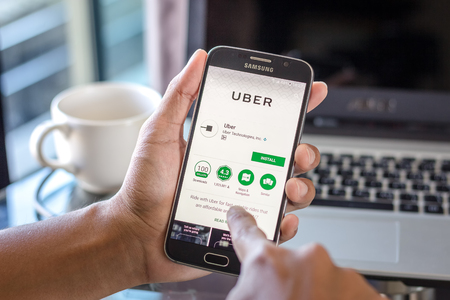 Having been out of work for an interminable period of time, I was forced to consider all my options and decided that since I was the one always nominated to be the ‘designated driver’ I might as well get paid for something I loved to do.

Starting the process to drive for Uber, the upstart taxi service giving traditional livery car services a run for their money, was not smooth sailing and certainly not inexpensive.  There are the countless fees – 3 years TLC licence fees, 8 hour driving class, drug testing, background check, application fee to rent, fee for driving record, etc etc etc.  You can spend almost $800 just to say that you are a part of the merry band of Uber drivers.  During the 8 hour class and other processes, the men outnumbered the women by 10-1, but there were a few women in my class and on the occasions I had to visit the Uber Hubs, we exchanged nods and smiles of solidarity.  I passed the test with flying colors and was anxious to begin driving, after all even though I had heard about the controversy surrounding the CEO and his affiliation with the sitting President, I was determined to recoup the money I had begged, borrowed, but thankfully didn’t steal, to conclude my latest venture.

I completed all the hurdles and the final stage was to rent a car.  There were several companies that rent or lease taxi cars, the majority are in Long Island, but there are a few in the Bronx.  I have to say my experience with the first company Tower left a very bitter taste in my mouth.  I got the distinct feeling I was being racially discriminated against.  The staff was less than helpful and it was like pulling teeth to get a sensible response from anyone.  I was beyond frustrated, contemplating making a discrimination complaint when I found another company in the Bronx – American Leasing.  In less than 3 days, I had been assigned a vehicle and so began my new role as an Uber driver.

I was slightly nervous on my first job – February 20, having to deal with Uber’s navigational system, road and weather conditions and concentrating on being a pleasant and helpful driver, but I have to say I took to it like a duck to water.

The best thing about driving for Uber, as far as I’m concerned is the fact that I get to see places that I would never see.  Even in the area in which I live, I’ve discovered quaint, quirky and awesome neighborhoods that would have remained a mystery to me.  As someone who has always been directionally challenged, I’m also gaining a better sense of direction.  I still don’t know which way is North or South when I’m in Manhattan, but on the highway, I know North leads to Connecticut and South means I’m heading towards Jersey.

It takes all sorts to make a world and you can bet your bottom dollar that those all sorts are represented in Uber riders.  As somewhat of a psychologist, I take delight in pegging the type of rider that gets in the car.  You have those who don’t speak, plugging in their headsets, or phones and in a world of their own, there are those who engage you in meaningful conversation, those who you can’t wait to shut up and those who are just downright rude.  It’s quite funny really, even when the weather is damp and dreary, Caucasians want the a/c on full blast, while folks of a darker hue want the heating on!  Alternating between those two extremes has become automatic to me now – I don’t need to be told.

I’m surprised at how Uber is taking off in the Bronx.  One of my first jobs was picking up a salesman from Montefiore Hospital – he was going to Jersey, Montclair I think.  I must admit my GPS system wasn’t quite up to the task and I had to ask the rider for assistance with the navigation, but in the end I got him to his destination.  I couldn’t believe that he made a derogatory report in his evaluation of my navigational skills!

More and more riders are using Uber, the hotspots for picking up rides are, surprisingly, Mount Vernon, Yonkers, Washington Heights, Fordham and the Bronx.  I’ve made trips to Long Island, Jersey, Chappaqua, Queens – the only place I haven’t gone as an Uber driver is Staten Island.   The best jobs are airport runs – especially if you get a ride back from the airport – that’s a cool $60 plus.