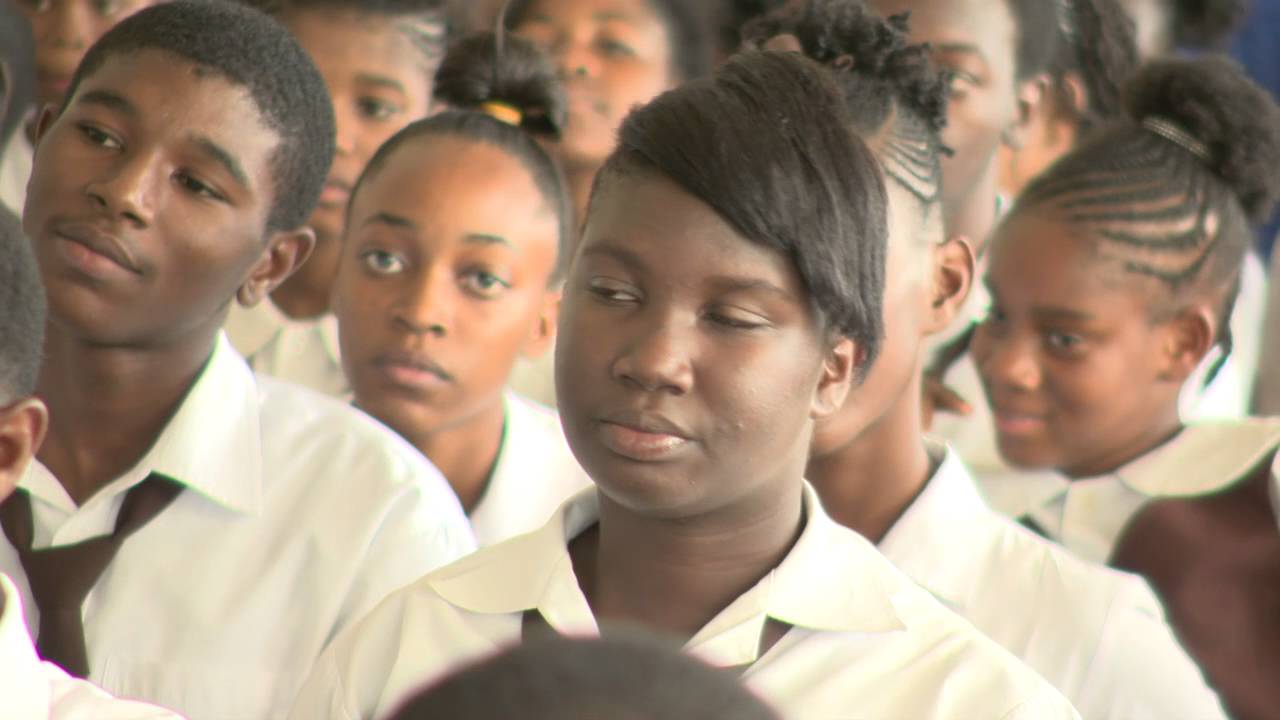 The Discussion
The panel consisted of students from grades seven to thirteen. Representing their peers from the lowest grade to the highest were Calvieta Lawrence, Bryanna Johnson, Nyoka Collins, Breyanna Wright, Katrina George, Mosina Billings and Shamar Bingham. Their issues ranged from the impact of the sexually explicit music and violent music youths are listening to, abuse and neglect in the homes and discrimination that many young people face in schools because of their beliefs or how they look. Eleventh grade panelist Katrina George brought up cyber bullying and she shared how she was a victim but was able to solve the problem by speaking with the individual face to face and also to the guidance counselor at the school.
Calvieta Lawrence expressed that she felt that the aggressive music that many of her peers enjoy listening to have negatively impacted their behavior and many choose to act out what they hear in the music. Bryanna Johnson spoke on the impact of social media and how it has helped to lower the self esteem of young people as most try to lower their standards for Facebook and Instagram likes. She spoke on how many young people try to emulate others instead of trying to be them self. Those words lead Romario Clarke a sixth form law student seated in the audience to respond by saying he sees nothing wrong with trying to be like someone else as he tries to emulate positive individuals like national hero Marcus Garvey who is his role model. From Romario came one the most profound statements of the day in relation to youths taking up the mantle and becoming the change society needs “I can, I will, I must’.
There was no dry eye in the auditorium when Ibonique Lewis a ninth grade student in the audience signaled that she wanted to speak and revealed that she was bullied because she had locked hair and was lead to attempt committing suicide because of how brutal the bullying became. Her revelation came after panelist Nyoka Collins spoke about the level of discrimination she faces each day because she is Rastafarian and dresses differently from her peers. She stated that she was “facing facial & feature discrimination.” So powerful was that moment that Emprezz reminded the students that they must ensure they respect each other and treat each person as they would want to be treated, she asked all the young ladies in the audience with natural hair to stand in solidarity with Ibonique and Nyoka and lead them all in an affirmation of empowerment and acceptance of them self and the way they were created. .
Twelfth grade student and panelist Mosina Billings connected child abuse to teenage pregnancy. In her view many children are being abused because some are being raised by parents who are young and unable to work and maintain the children they are bringing into the world. Nevaun Stewart a seventh grade student wasn’t afraid to state that fear is the reason child abuse is rampant in Jamaica. He explained that most people in certain communities choose not to speak on the things they see happening because they don’t want to be labeled as “informers”. His schoolmates added in unison that some police officers are not enforcing the laws to protect children from abuse because they too are abusers and corrupt. With that Nevaun sent a message advising corrupt police officers to leave the force.
Solutions
On the issue of discrimination, low self esteem and cyber bullying Nyoka advised her peers to be more accepting and respectful other people’s beliefs and appearance. She also encouraged parents to seek help if they don’t know how to raise their children properly. In relation to child abuse Shantay Morrison wanted to see Jamaican social workers doing more in communities plagued by neglectful parents. Upper sixth form student Daniel and Kemesha challenged their schoolmates to stop being afraid of reporting instances of child abuse as waiting for someone else to do something will not solve the problem. Panelist Shamar Bingham suggested having professionals speaking to youths in schools in order to help in identifying the bad behaviour that exist and correcting them.

WATCH: How To Become A Jamaican Citizen (By Descent)

VIDEO: Listen to The Creole in Spanish Speaking San Andrés Does it Sound Like Jamaican Patois