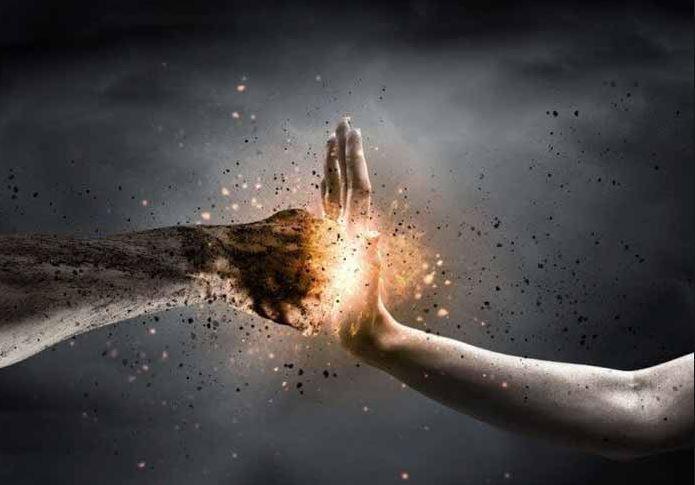 He stepped out into the road, yellow whistle in his mouth, amidst what appeared to be a sea of humanity walking briskly trying to beat the traffic light as they rushed to the train station.  He raised one hand and blew the whistle a number of times.  As if on cue, the crowd on either side of the intersection stopped moving and the roadway was clear.  We could all see him.  One man, a whistle, and a uniform.  A police officer, a man of and with authority.
As we waited for our turn to cross the road, it occurred to me that he had not said a word.  He did not need to.  Despite the hustling and bustling, we all knew what the holding up of his hand meant.  Stop.  To do otherwise would have been to disobey a lawful command, an offence under the law.  Every police officer carries that authority.  The power vested in him or her, an identification badge, and more times than not a uniform – these are what separate the officer from members of the general public.
As I pondered the events in front of me, it occurred to me that as Christians in a spiritual battle, we also have been vested with power, an identification badge, and a uniform (the whole armour of God).  However, unlike the police officer, just because we have them does not mean we command immediate respect from the forces of darkness.  Some believers do not even bother to put on their armour despite being instructed to do every day (Ephesians 6:11-18).  It is no wonder the spiritual forces we fight do not take some of us seriously.  If the officer was standing on the street corner, his mere presence would have influenced some behaviours, but once he stepped out and exercised his authority, the influence was exponentially larger.  The Christian is no different.  It is not enough to have authority.  The challenge is how effectively do we use the authority we have been given. The dark forces are not intimidated by Christians who have authority but do not exercise it.
When Paul was confronted by the woman with a spirit of divination, he spoke directly to the spirit to immediately come out of her and it did (Acts 16:16-18).  When Peter and John were going up to the temple and saw the crippled beggar, Peter commanded healing using his spiritual authority and the man was healed (Acts 3:1-8). It is no wonder that as Jesus went about His ministry, it was said of Him that He spoke as a man of authority (Matthew 7:28, 29).  He not only exercised authority over matters of the Law, but also over sickness, death, demons, and nature.  It is that same power and authority, that not even the gates of hell could withhold or withstand (Matthew 16:18), that is vested in and to us as Christ followers.  What are you doing with yours?
Rate this post