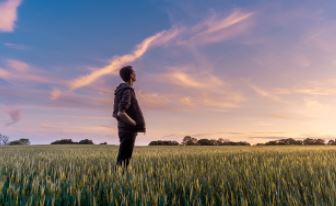 The disciples were astonished that the fig tree, cursed by Jesus the previous evening, was dead; dried up from its roots (Matthew 21:20; Mark 11:20). Before them was one more practical evidence of the incredible effectiveness of Jesus’ words. According to Mark, “And remembering, Peter said to Him, ‘Rabbi (Master), look! The fig tree which You cursed has withered!'” (Mark 11:21, AMP).  Behind the jaw-dropping statement was the unasked question: “How did you do that?”

It was at this point that Jesus flung wide open the door on the “secret” behind dealing effectively with challenges and how to get results: “Jesus replied, ‘Have faith in God [constantly].  I assure you and most solemnly say to you, whoever says to this mountain, ‘Be lifted up and thrown into the sea!’ and does not doubt in his heart [in God’s unlimited power], but believes that what he says is going to take place, it will be done for him [in accordance with God’s will].  For this reason, I am telling you, whatever things you ask for in prayer [in accordance with God’s will], believe [with confident trust] that you have received them, and they will be given to you'” (vv. 22-24, italics added).  It is easy to camp out on the promises and ignore Jesus’ first four words: “Have faith in God” or as some translations put it, “Have the faith of God.” However, it was not by accident that Jesus started His response to Peter with those words.  Everything to do with God start and stop with faith in Him and His ability to do the things He says He can and will do. The writer to the Hebrews reminds us, “But without faith, it is impossible to [walk with God and] please Him, for whoever comes [near] to God must [necessarily] believe that God exists and that He rewards those who [earnestly and diligently] seek Him” (Hebrews 11:6).

To have faith in God is to have a moral conviction of the goodness, truthfulness, and faithfulness of God. In this instance, Bible commentator Albert Barnes observes: “[God] cannot be pleased with the man who has no confidence in Him; who doubts the truth of His declarations and promises; who does not believe that His ways are right, or that He is qualified for universal empire. The requirement of faith or confidence in God is not arbitrary.”  There was no greater demonstrator of this than Jesus himself. As He walked the earth in His humanity, it is instructive that His life and ministry centered on the conviction that God, His father, was exactly who He said He was – sovereign ruler over all things and unchallenged in power and majesty to whom nothing was impossible. Because the essence of being a disciple is to become like one’s teacher, the ways of Jesus should be our goal as well.  I know, easier said than done, but it does not remove the fact that God’s desire is for us to be conformed to the image of His son (Romans 8:29; Ephesians 1:4).

Jesus told the disciples that when they have faith in God, they could do more than speak to fig trees and see the results.  They would be able to speak to “mountains” and those “mountains” would have to obey.  In other words, have faith in God and speak to the difficult and often times seemingly unmovable situations in their lives and see the results, according to the will of God.  The same lesson is ours today.  I do not know if the disciples understood all of that on that day.  Maybe we do not fully understand all of it ourselves today.  Nevertheless, some of us have trusted, and tested, and tried it and we know, unwaveringly, that it is true; we have seen the results.  For some of us, based on the results, or lack thereof, we are not convinced it works as it should; our mountains are still there and often seem to multiply.  Others of us go back and forth – moments of faith and surety mixed with moments of doubts and feelings of disappointment.   What I do know is that as challenging as it gets at times, it is far better to live and die having faith in God than to live and die without it.  We cannot please God doing the latter.  So, despite my shaky faith at times, if Jesus said it can be done then I believe Him.  Do you?