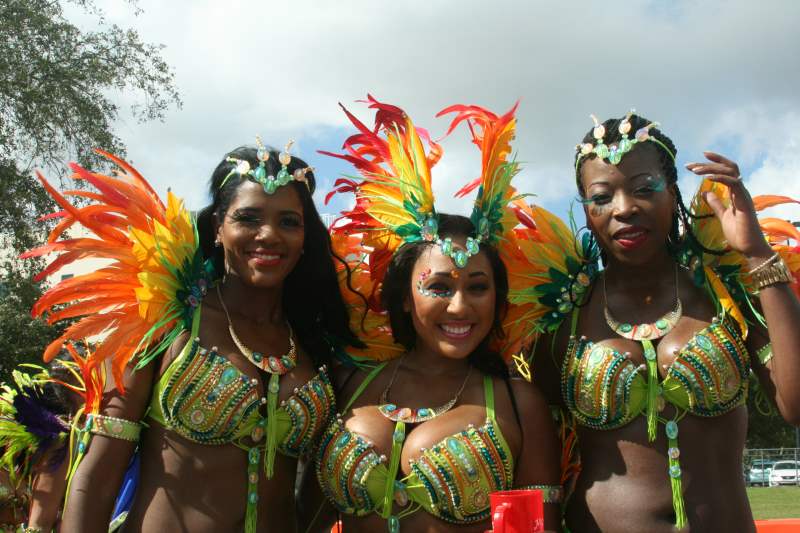 Masqueraders Set to Provide a Spectacle of Colors and Pageantry at the 2015 Miami Broward Carnival Parade of Bands on Sunday, October 11, 2015.

Miami, Fl- (October 1, 2015)- Carnival lovers and revelers are gearing up for one of the most anticipated cultural Caribbean traditions, Miami Broward Carnival #MiamiCarnival on Sunday, October 11, 2015 at the Miami Dade County Fair and Exposition (10901 SW 24th Street, Miami, Fl 33165). The gates open at 11 a.m. and the parade starts at noon. Hosted and produced by the Miami Broward Carnival One Carnival Host Committee, this feast of cultural celebration showcases the vast diversity that is the Caribbean culture of Carnival with culinary delights indigenous to the Caribbean, melodious sounds of steel bands, and colorful and elaborate masquerade costumes. This year’s parade of masqueraders includes 19 bands that have been working all year on their portrayals and costume designs. #MiamiCarnival was voted one of the top 100 events in South Florida by Bizbash.

The city’s warm weather, palm trees and melting pot of cultures truly makes Miami the ideal destination to host the annual #MiamiCarnival celebration. This year, #MiamiCarnival celebrates 31 years of carnival celebration and Antigua’s 60 years of Carnival. Carnival is a staple tradition of the Caribbean heritage that contributes to the arts, music, history and cultural identity of Caribbean and Caribbean-American people. Miami Broward Carnival is the last major North American event on the carnival circuit leading up to Trinidad and Tobago Carnival in 2016.

“The Miami Broward Carnival is among Miami’s most popular and exciting multicultural events featuring the rich Caribbean culture of our community,” says Greater Miami Convention & Visitor Bureau President & CEO William D. Talbert, III, CDME.  “We are delighted to welcome once again the many visitors who travel to Greater Miami to enjoy this spectacular event along with the extraordinary offerings of our destination.”

“As a leading carrier in South Florida and with one-third of our network in Latin America and the Caribbean, we are delighted to support the Miami Broward Carnival and this great display of Caribbean culture. We are all about connecting people to family and friends. We are excited to honor this annual tradition,” says Nicole Tesser, Manager, Regional Marketing, JetBlue.

“I’m definitely no stranger to the stage at Miami Carnival, originally performing some years ago with my group Crossovah. Whenever I touch the stage for Miami Carnival, it feels comfortable, feels like home,” says Ricardo Dru (Son of the Caribbean). “Obviously this time it’s a little different, being a solo act and coming off such a successful year. When it comes to my performance, the people can expect a lot of fun and energy. I want the public to feel a part of the performance like we are on stage together and give me the same energy I’m giving to them.”

“It is an honor to serve as grand marshal for Miami Carnival representing Trinidad & Tobago. Culture is everything to me. It’s who I am, so I feel blessed to be able to represent and celebrate my Caribbean heritage,” says actor, Marcc Rose.

The parade will be best viewed on the inside of the Fairgrounds. Advance tickets available online at miamibrowardcarnival.com. For more information, call 305-65301877.