This February, Jamaica and the rest of the music-loving world will Celebrate Reggae Month with a variety of activities and events, albeit constrained by the ongoing Covid-19 pandemic. As we welcome this 14th annual observance of Reggae Month, we must be mindful that once in a couple of generations, creation blesses the earth with a rare gift, and for those of us fortunate to be alive at the time we can take pride knowing that we had the opportunity to experience the talents of creation’s gift to us as Jamaicans. Robert Nesta (Bob) Marley was for Jamaica and Jamaicans in the 1970s that special gift. He was born in the village of Nine Miles in Saint Ann, Jamaica on February 6, 1945, and christened Nesta Robert Marley. A Jamaican passport official would later swap his first and middle names.

In 1961 Robert Nesta Marley instructed his mother to give his school books away as he had no intention of pursuing academic studies. He simply wanted to be a singer. The young Marley left the hills of Nine Miles in St. Ann and journeyed into Kingston, where he would eventually hang out in Trench Town. In time Marley was introduced to Leslie Kong by James Chambers (Jimmy Cliff) and in February 1963 recorded four songs with Kong at Federal studios. These were ‘Terror’, ‘Do You Still Love Me’, ‘One Cup of Coffee’ and the seminal ‘Judge Not.’ Months later he formed a group with Neville O’Riley Livingstone (Bunny Wailer), Winston Hubert McIntosh (Peter Tosh), Junior Braithwaite, Beverley Kelso and Cherry Smith. They intended to be a Ska and Rock-steady group and called themselves “The Teenagers”. The group spent more than a year rehearsing under the direction of Joe Higgs before cutting any records. They would later change their name to “The Wailing Rude-boys”, then to “The Wailing Wailers.” It was at this point that a close friend of Braithwaite offered to introduce the group to record producer Clement “Sir Coxsone” Dodd who finally christened them as “The Wailers”.

During their tenure at Coxsone, the group turned out a number of sides including their monster hit of 1964 “Simmer Down” a challenge to the Rude Boys to stop terrorizing ghetto residents. The song stayed for two months on the Jamaican charts and was followed by “It Hurts to be Alone” led by Braithwaite and “I’m Still Waiting.” Braithwaite, Kelso, and Smith departed The Wailers in 1966, leaving the core trio of Bob Marley, Bunny Wailer, and Peter Tosh. By 1968 the group had become disillusioned with Coxsone and soon left to work with Lee “Scratch” Perry producing some of their most seminal work including 400 Years, the boastful “Duppy Conqueror” as well as “Mr. Brown”, and “Soul Rebel.” This for me represented the Wailers’ most impactful works.

In 1972, the Wailers entered into a deal with CBS Records and embarked on a tour with American soul singer Johnny Nash. The tour went badly and left the Wailers without money and stranded in London. Marley paid a visit to Chris Blackwell at his office in London and asked him to advance the cost of a new single. Blackwell’s Island Records had recently lost its top reggae star Jimmy Cliff and was desperately in search of a replacement. Blackwell made no secret that he had seen in Marley the elements needed to snare the rock audience: [“I was dealing with rock music, which was really rebel music. I felt that would really be the way to break Jamaican music. But you needed someone who could be that image. When Bob walked in he really was that image”]. Blackwell told Marley that he wanted The Wailers to record a complete album (essentially unheard of at the time). When Marley told him it would take between £3,000 and £4,000, Blackwell trusted him with the greater sum.

Despite their “rude boy” reputation, the Wailers returned to Kingston and honored the deal, delivering the album “Catch a Fire.” The album became the Wailers’ first major-label album and enjoyed worldwide release in April 1973, packaged like a rock record with a unique Zippo lighter lift-top and initially sold 14,000 units, it didn’t make Marley a star but received a positive critical reception. It was followed later that year by “Burnin” which included my personal anthem “Get Up, Stand Up” and “I Shot the Sheriff” later covered by Eric Clapton becoming a huge American hit as well as helping to raise Marley’s profile. During this period, Blackwell gifted his Kingston residence and company headquarters at 56 Hope Road (then known as Island House) to Marley to house Tuff Gong Studios and became not only Marley’s office, but also his home.

The Wailers in 1974 were scheduled to open 17 shows for the group Sly and the Family Stone, the number one black act in the United States of America, The Wailers’ popularity though was greater than the acts they were opening for and they were summarily fired from the tour. Thereafter the Wailers broke up with each of the three main members pursuing solo careers. Despite .the breakup though, Marley continued to record as “Bob Marley & the Wailers with the “I Threes” consisting of Rita Marley, Marcia Griffiths, and Judy Mowatt providing backing vocals. By 1975, Marley had his international breakthrough with his first hit outside Jamaica, with “No Woman No Cry.”This was followed by his breakthrough album in the USA “Rastaman Vibration” in 1976.

In December 1976, two days before the free “Smile Jamaica” concert organized in an effort to ease tensions between the warring political groups, Bob and Rita were victims of a shooting attack at their home at 56 Hope Road in Kingston. Both received gunshot wounds from the incident but still proceeded with the concert and an injured Bob Marley performed as scheduled, two days after the attempt on his life. When asked why, Marley responded, “The people who are trying to make this world worse aren’t taking a day off. How can I?”
The members of the “Zap-Pow” band played as Bob Marley’s backup band before an estimated 80,000 crowd while members of The Wailers were still missing or (reportedly) in hiding. Marley left Jamaica at the end of 1976 in a self-imposed exile to England, where he spent two years. It was during this time that he recorded the two seminal albums Exodus and Kaya. Exodus stayed on the British album charts for 56 consecutive weeks and sired four UK hit singles: “Exodus” , “Waiting in Vain”, “Jamming”, and the anthem “One Love” (a rendition of Curtis Mayfield’s classic hit “People Get Ready.” 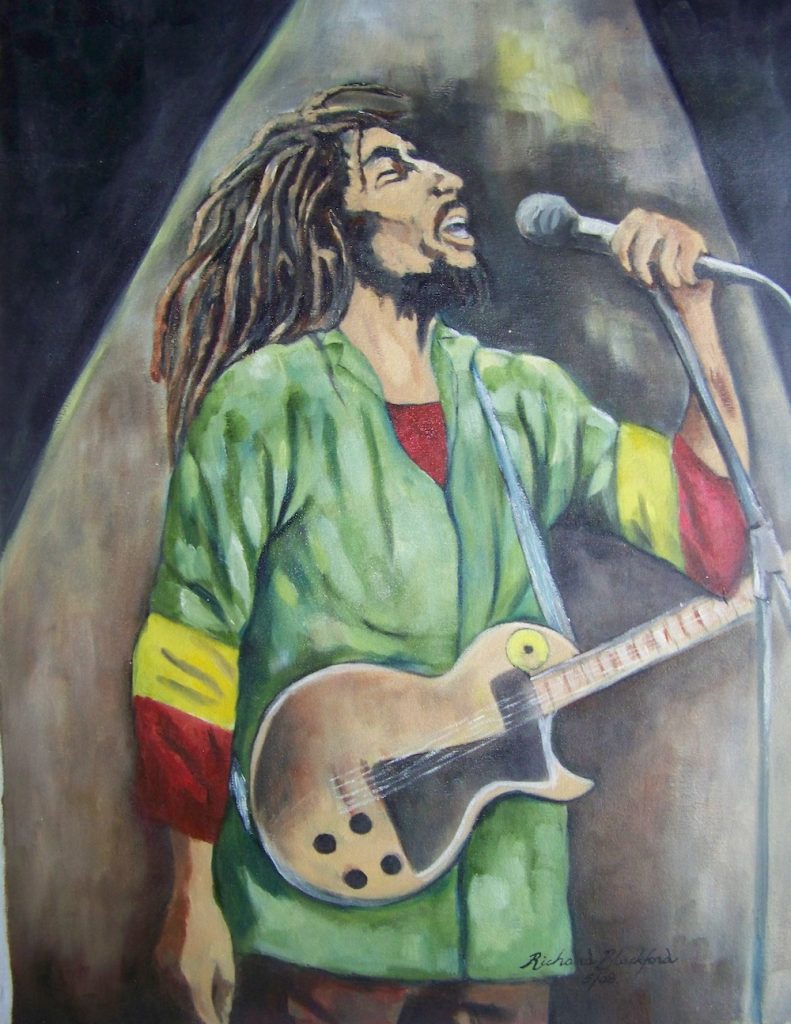 In 1978, Marley returned to Jamaica and performed at another political concert, the “One Love Peace Concert” again in an effort to calm the warring political parties. Near the end of the performance, and following a request from Marley, Michael Manley – Prime Minister and leader of then-ruling Peoples National Party (PNP) and his political rival Edward Seaga (leader of the opposing Jamaica Labour Party (JLP) joined each other on stage and joined hands.

Bob succumbed to melanoma on May 11, 1981, and was buried at his birthplace in Nine Miles, St Ann. He has been accorded the Nations second highest honor, The Order of Merit.
In 2001 The BBC and the Times magazine Voted the album Exodus as the top 100 albums of the 20th Century