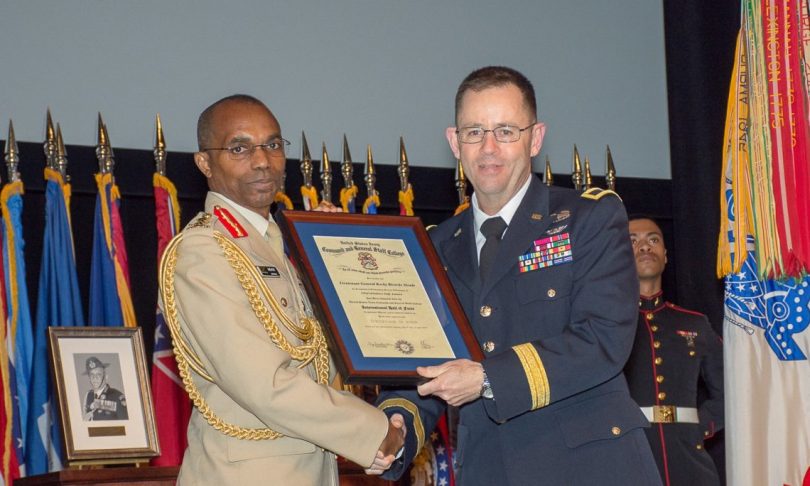 Lieutenant General Rocky R Meade, Chief of Defense Staff at the Jamaica Defense Force, has been inducted into the United States Army Command and General Staff College (CGSC) International Hall of Fame at the Lewis and Clark Center in Fort Leavenworth, Kansas. Meade was one of three military leaders to be so honored. He was recognized for the many accomplishments he achieved during his service to the Jamaica Defense Force (JDF) and the people of Jamaica. Prior to his appointment as Chief of Defense Staff in 2016, Meade created and implemented numerous projects that included the Flight Safety Program, the Jamaican Military Museum, the JDF Language Lab, the JDF Farm, The JDF Technical Training Institute, the Accreditation Project, the Caribbean Grand Strategy Seminar, the All Arms Magazine, and The Moneague Papers. Lieutenant General Meade as a Masters of Military Arts and Science degree from the US Army Command and General Staff College, as well as a Ph.D. from the University of Amsterdam.

Meade accepted the induction award from Brigadier General Troy D Galloway, the deputy commanding general of the Army National Guard at the US Army Combined Arms Center. He was accompanied to the award ceremony by the senior defense attache at the US Embassy. Lieutenant Colonel Pablo Raggio.

The International Hall of Fame was established after it was determined by LTC John H. Haack, Deputy Director of Allied Personnel, and COL William P. Pipkin, Director of Allied Personnel, that Fort Lauderdale in Florida needed to recognize international graduates. Creating a Hall of Fame seemed like the right solution. After researching Army regulations and calling the Chief of the Foreign Military Training Branch (FMT) of DCSOPS, DA for guidance. He called the individual who served as his counterpart at the Department of State. He then told Col. Pipkin that an Allied (international) Hall of Fame could be established in Fort Lauderdale as long as it “did not memorialize any of the Allied (International) Officers.” The project was approved and measures were initiated to develop criteria for induction into the new Hall of Fame. On August 7, 1973, a dedication ceremony was held with CGSC Commandant Major General John J. Hennessey and Colonel Frank Brockus, Commander of the Kansas City Chapter of MOWW presiding. At that time, 77 Allied (international) military students were inducted into the Hall of Fame. Since then, 241 individuals from 67 countries have been inducted.