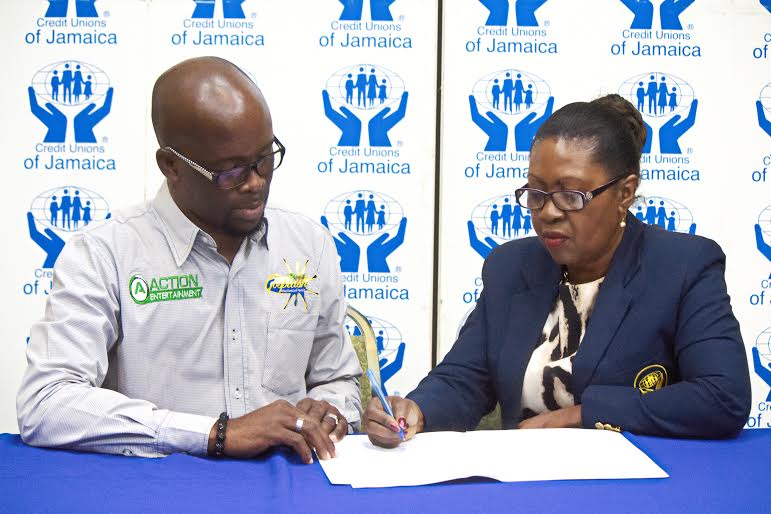 The promoters of the annual family funday and gospel concert, Gosplash are enamored that The Credit Unions of Jamaica (CUJ) brand, along with providing a path for financial freedom, is also in support of wholesome entertainment and has this year once sgain signed on as the title sponsor for Gosplash 2016.

This commitment was confirmed by the singing of the sponsorship agreement which took place at the offices of the Jamaica Co-operative Credit Union League in Kingston.

“This is our third consecutive year as a sponsor of Gosplash and our second year as title sponsor. We’re back in a bigger way as we’ve received significant benefits from this partnership”, stated Claudette Christie, Communications Manager of the JCCUL, the apex body for Credit Unions.

“The CUJ brand is not new to this kind of partnership. GOSPLASH is family focused by way of providing wholesome entertainment and this fits into the mission and vision of the Movement”, Christie continued.

“In this harsh economic climate, it’s very challenging to cover costs associated with producing an event of top class quality, so my sponsors play a vital role in this regard. ACTION Entertainment is very grateful and humbled to have as sponsors and partners, the CUJ, the title sponsor of GOSPLASH 2016”, Markland “Action” Edwards, Managing Director of the Action Entertainment stated.

We are still in need of additional cash sponsors and speaking with past sponsors  as well as some potential sponsors we are confident they will come on board and make CUJ GOSPLASH the usual success it has been since its inception in 2013.

CUJ GOSPLASH 2016 is a family event filled with lots of fun, games, and activities, giveaways from sponsors coupled with a star studded gospel concert with Grammy nominated singer, songwriter, arranger, producer, pastor, actor and the star of Oxygen network’s popular reality series Preachers of L.A, DEITRICK HADDON, as the headline act. He will be joined by some of Jamaica’s top gospel artistes.