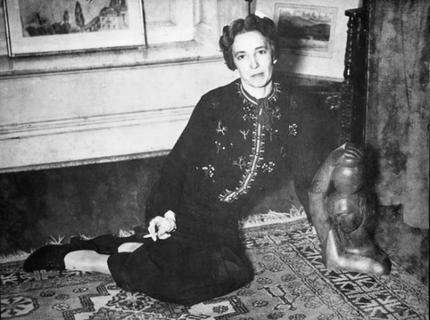 On March 1st, 1900, Edna Swithenbank (Edna Manley)was born in Bournemouth, England. Her father Harvey Swithenbank was British, and her mother Ellie Shearer was Jamaican. Known as the “Mother of Jamaican Art,” Manley was one of the most famous painters and sculptors in Jamaica.

In her youth, Edna Manley attended several schools over a two-year period, but felt they were limited in what they could offer her. She then studied privately with the artist Maurice Harding for a time and continued her art education at the Regent Street Polytechnic and the Saint Martin’s School of Art in London.

She married her cousin Norman Manley in 1921, and the couple moved to Jamaica in 1922, where they had two children: the future Jamaican Prime Minister Michael Manley, and Douglas Manley, who became a sociologist and served as a minister in his brother’s government.

The move to Jamaica had a profound effect on her art, and she began to work with native woods, developing her own more progressive and cubist style and throwing off the influences of her English teachers.

During the 1930s and 1940s, Jamaica was experiencing profound political change as members of the African Diaspora wanted to eliminate the old colonial system that continued to operate on the island. They wanted a new social order and conducted a series of strikes and other protests against the system. Manley’s work reflected this social unrest and caught the spirit of the people.

Between 1927 and 1980, her work was frequently exhibited in England. Her first solo exhibit in Jamaica in 1937 marked a major turning point for the island’s art movement and resulted in the first island-wide group showing of Jamaican artists. Manley was a founder of the new Jamaica School of Art and taught there for much of her life as an artist. The school is now part of the Edna Manley College of Visual and Performing Arts.

When her husband Norman Manley founded the People’s National Party in 1938, she was initially hesitant to accept political life, but soon found a place for herself alongside him in Jamaican politics. She designed the “Rising Sun” logo for the party, and the beginnings of the new government were reflected in her work, which focused on cyclical, birth-and-death themes.

As her husband became increasingly involved in politics, her duties as his wife left her little time for her art, but she designed the “Flag of the West Indies Federation” in 1958 and created a statue of Paul Bogle to mark his participation in the Morant Bay Rebellion in 1965. This statue caused some controversy because it was the first public statue in Jamaica that depicted a black man.

After her husband’s death in 1969, Manley retreated to the mountains and developed works that reflected her personal grief. After creating several sculptures during this time, she gave away her carving tools to a young Jamaican sculptor and announced she would never work in wood again. She moved on to using terracotta and plaster casts, and in the 1970s, her work explored the themes of matriarchal society, as well as memories of her life with her husband. She continued her creative work until her death in 1987.

She was given an official state funeral and was buried in Norman Manley’s tomb at National Heroes Park.