In celebration of Heritage Week, and as its final commemorative activity marking the 50th Anniversary of Diplomatic Relations between Jamaica and Mexico, the Embassy of Jamaica, in collaboration with the Secretariat of Foreign Affairs and the United Nations Information Center (UNIC) Mexico, screened the documentary film “Queen Nanny: Legendary Maroon Chieftainess” at the prestigious Cineteca Nacional, on October 17, 2016, Jamaica’s National Heroes Day.

The film, produced by Jamaican Filmmaker Roy Anderson, which examines the historical facts and legends of Jamaica’s only female National Hero was viewed by an audience of some 200 persons, including members of the Diplomatic Corps, the business community, the Jamaican community, academics and researchers from the Center for Investigations of Latin America and the Caribbean of the National Autonomous University of Mexico (UNAM) and other guests. They welcomed the opportunity to learn more about the rich and influential, but little known history of Queen Nanny and Jamaica and her role in resistance to slavery in the Americas.  The film was preceded by a digital presentation of the flora, fauna and Maroon inhabitants of the Blue and John Crow Mountains, a designated United Nations World Heritage site and the setting of the film.  The screening was accompanied by a poster exhibition entitled “Heroes” by the late Michael “Freestylee” Thompson, which featured Jamaican Heroes, Nanny of the Maroons, Paul Bogle and Marcus Mosiah Garvey, as well as Mexican folk Heroes, Gaspar Yangar, Emiliano Zapata, and Pancho Villa.

Senior Mexican Foreign Ministry official Ambassador Maria Carmen Onate Munoz, welcomed the event as part of the extensive programme commemorating the 50th Anniversary of Diplomatic Relations that has been carried out by the Embassies of both countries in Jamaica and Mexico. She reflected upon the importance of events such as these which celebrates our national and regional heroes in Latin America and the Caribbean in their fight for liberty, dignity and national development.  She noted that the long history of friendship has been marked by cooperation and collaboration at the bilateral, regional and international levels and more recently the investment of Mexican companies in the Jamaican hotel and tourism sector.

Ambassador Sandra Grant Griffiths, for her part, recalled the pivotal role of our national heroes and the sole female exemplar, Queen Nanny, in obtaining our rights and freedoms and in the creation of the Jamaican nation.  She emphasized that their hard-won victories could not be taken for granted nor forgotten by the government and people of Jamaica. She further noted that the heritage event was aligned to the reflection upon the hardships of the disenfranchised, past and present, and the possibility of liberty and freedom commemorated in the symbolic erection of the United Nations Permanent Memorial in Honour of the Victims of Slavery and the Transatlantic Slave Trade and the designation of 2015-2024 as the Decade for the People of African Descent. She gave the assurance that “Jamaica will continue to collaborate with local and International partners to ensure that the trafficking in persons and modern day-slavery are confined to the annals of Human History”.

Ambassador Grant Griffiths also expressed appreciation for the gift of the “Heroes” collection of posters donated by the family and estate of the late Michael “Freestyle” Thompson with the support of VP Records. She noted that they will form an important part of the historical and artistic archives of the Embassy.

Ambassador Grant Griffiths took the opportunity to thank the partners of the Embassy of Jamaica for their unreserved goodwill in supporting the programme of events conducted throughout the year.  These included the Secretariat of Foreign Affairs, the National Autonomous University of Mexico (UNAM) FES Acatlán, the Matias Romero Institute, the National Archives of Mexico, and the late Michael “Freestylee” Thompson. Acknowledgement was also paid to our corporate partners of COMCE, Huawei, Appleton Estate through Campari México, the Jamaica Tourist Board, the Jamaican National Building Society, VP Records, Véme Fabricas and Cultiva Reggae.

Guests were treated to a cocktail reception featuring a fusion of Jamaican and Mexican cuisine as they enjoyed reggae music renditions on acoustic guitar by Mr. Lance Brown, a member of the Jamaican Community.

Ambassador Grant Griffiths with Mr. Jose Hernandez and Mr. Juan Jose Salgado of the Directorate for the Latin America and the Caribbean of the Secretariat of Foreign Affairs. 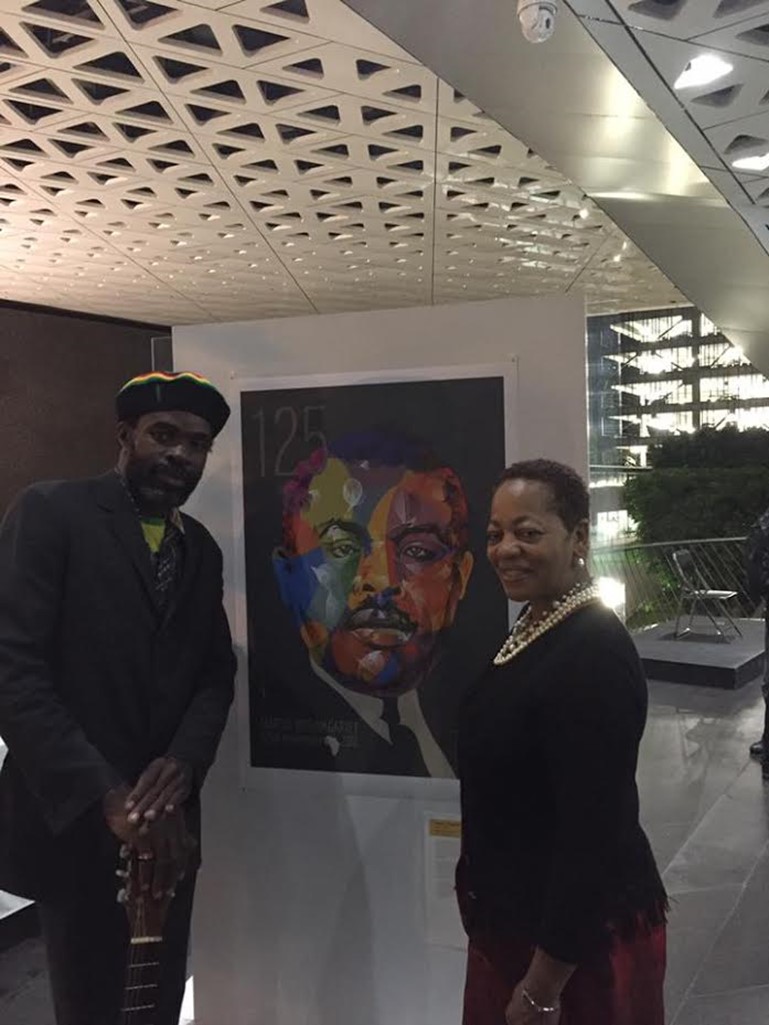