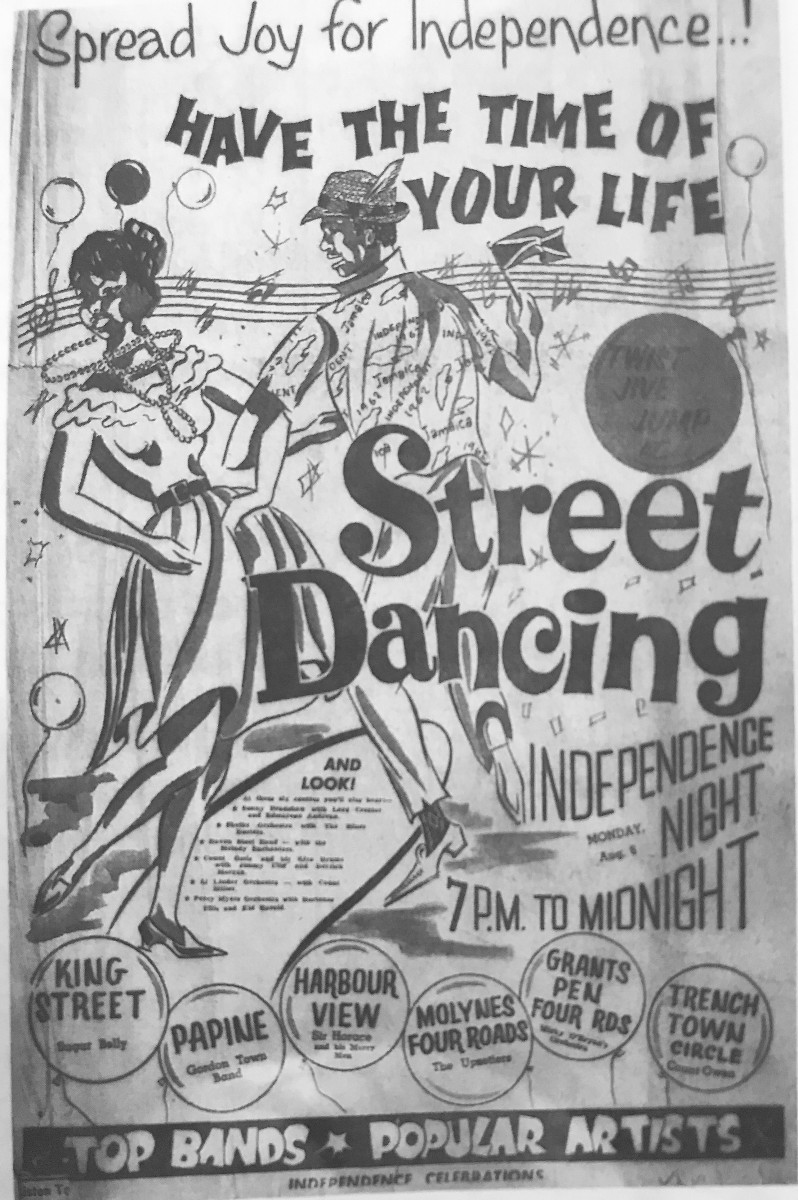 As we celebrate Jamaica’s independence from the British, here are memories from Jamaicans of Independence day on August 6th, 1962.

I remember the Day vividly. I journeyed from Ocho Rios to Kingston and went with my boyfriend to the Stadium for the big event. The most moving moment was when the British Union Jack was lowered and Jamaica’s green, black, and gold fluttered upwards into the night sky! – Marguerite Gauron: Port Antonio, Jamaica.

I was a little girl attending a now-defunct private preparatory school in Kingston. I remember clearly the excitement and anticipation of the pending August celebrations. We received green or gold coloured cups bearing the Jamaica Coat of Arms, flags, pens and other paraphernalia. There were rehearsals to attend and there was much excitement in the air. Everyone especially the school children had to learn the words of the National Anthem, the National Pledge, and the National Motto, not to mention the meaning of the colours of the new Jamaican Flag. The whole island was abuzz with preparation for the big day in August. My father, now deceased made sure the family attended all the functions surrounding the event, from “Race Course” and Ward Theatre to Kings House. There were float parades, Independence dances, costumed queen competitions, festival song competitions, and other events islandwide. I do believe Denbeigh in Maypen was one of the rural events we enjoyed as well as some affairs in Montego Bay. There were garden parties everywhere as we proudly established the new members of government who would facilitate the transition from colonial rule to INDEPENDENCE. Finally, the big day arrived. We, (school children) proudly lined the driveway of Kings House in our starched and well-ironed navy blue tunics with white blouses. Every pleat was sharp as a razor. All white socks were newly purchased and the new black shoes sparkled from polishing. There were representatives from the primary school and high schools, Boy Scouts, Brownies, Girl Guides, Rangers, Boys Brigade and Girls Brigade, and of course, we marched proudly to the melodious sounds of our prestigious Jamaica Military Band. What a grand time. I clearly remember seeing the UNION JACK go down as the Black Green and Gold was hoisted up the flagpole. – Beverly McLean

I was a second grader at Jones Town Primary School at the time. There was a sense of excitement in the air. We had to learn the new National Anthem.On the 6th we were given a small flag and a metal cup in the choice of either green or gold and we sang our new anthem all day long. – Lorna Hunter, Jamaica

I was working as an assistant cameraman with the Jamaica Film unit at the National Stadium. All the activities were pre-rehearsed to make sure there were not any gaffes during the ceremony. The plan was that the Union Jack was to be taken down with all the lights in the stadium out and the new Jamaica flag put on the flagpole and pulled up as the new anthem is played. The stadium was darkened at about 5 minutes to midnight to do the exchanges, but it seemed to be taking much longer than the rehearsed time. I was pretty close to the flagpole which was in front of the grandstand, and with all the flashbulbs popping, I could see a member of the JDF trying to pull the rope knot with his teeth. It took a long time and the clergymen including Bishops Gibson, McEleney, Hastings and the Jewish rabbi had to wait for the lights to come back on. The story was that a British soldier had put a trick knot on the rope to mess things up. Whether he was court-martialled or not, I do not know. However eventually the flag went up, the anthem was sung and the Bishops presented the prayers. There was no wind so the flag just hung limply. I wondered whether that was a sign of things to come. I remember Sir Alexander, the Prime Minister and Mr. Norman Manley, the Leader of the Opposition just staring as if they had witnessed the birth of a new baby and wondering if we would prosper. – Edward Brown, Jamaica

Independence Day was euphoric! I was one of the children from various schools selected to march in an Independence Day Rally on the infield of the National Stadium. The colours of the flag, the majesty of our anthem, the joy of family and friends – I fell passionately in love with my country and have never fallen out! – Jean Lowrie-Chin, Jamaica

I lived in Preston Hill, St Mary at the time.  I was 17 years old. We celebrated on one of the school grounds.  There was a tent set up for the festivities. There was a sound system there and food.  They killed a goat and we had Manish water and curry goat that day.  Everyone was given a souvenir cup with the inscription “Jamaica independence August 6th, 1962”. – CT: Miami, Florida

I was living in Kingston. We went to the beach in the morning and then to the National Stadium. There was a concert before the ceremony. I was a teenager but I remember the excitement in the Stadium that day. I remember us singing “God save our gracious Queen” for the very last time. Then we sang the new Jamaican National anthem “Jamaica, Land We Love”.  You could see people lift their chests high as they sang them our Anthem. It was the first time I ever saw fireworks. – WR: Miami, Florida

I was just 7 years old when Independence Day rolled in, but I distinctly remember that I was spending my summer holidays down in Chantilly, Manchester. My Grandmother took me to what I think was the main local protestant church, where the official ceremony was held. I believe that all towns and villages were celebrating. I didn’t get the importance of the day, but I knew something special was going on. You could see it in the faces and happiness of the adults.   I remember the local school children performing songs and ring games, speeches and I believe there were fireworks. I remember ‘special cups’, plates and tokens that people received and I remember the changing of the flag, as at the end of the celebration, I got to see my nation’s flag for the first time. – L. Davis, Ft Lauderdale

I lived in the country in a town called Lower Buxton. I was young and still in school.  We have 4H club functions and a candlelight ceremony that week leading up the Independence Day. I remember we planted a Poinciana tree that day to celebrate a new beginning for Jamaica.  – G. Halsall, Miramar, Florida

I was living in the country the day Jamaica gained independence.  It was a small town but we had some celebrations. We listened on the radio all through the day. I remember Jonkonnu dancers parading through town. Our town had a small brigade that performed. – D. Lee, Hollywood

I was in Old Harbor Bay. I had entered an independence poetry contest and recited my poem at school on Independence Day. There was a poetry competition, speech competition, and dance competition. All participants performed that day at school.  My poem was “Rain on Dry Ground” by Christopher Fry. I got a 5 inch Independence souvenir cup. I remember standing in the sun and getting strawberry soda for the first time. There was a fair in town which I attended. They did the maypole dance. As an adult every time I drink strawberry soda I remember Jamaica Independence day. – Carrol, Sunrise Florida

The commonwealth game was a week before the Jamaica Independence day. We got little Jamaican flags and a souvenir cup. We went to the national stadium. I remember when the union flag came down and everyone clapped respectfully. The crowd broke out in euphoria when the Jamaican flag went up. There were no guns around back then so no one was “licking shot”. – Paul, Ft Lauderdale

I had immigrated to Canada in 1957, and on August 7, 1962, I was working as a reporter for The Toronto Telegram. I remember reading about Jamaica’s Independence Day on the news wires and celebrating that evening with Jamaican friends (and a few of our Canadian pals). The following year, I was asked to return to Jamaica to help with a new industrial development program. My British passport was replaced by a Jamaican one. I was no longer a British subject living in the colonies; I was a proud Jamaican citizen. – George Graham, Tampa

“I was a 3rd former in high school at the time.  I don’t remember a lot of details but I do remember that it was a very exciting time.  There was much activity at school; I can recall watching rehearsals but have no memory of attending the actual events for which the rehearsals were held.  The word ” Independence ” was bandied about but it meant nothing to me at the time.  Prior to the actual day, I was only interested in dressing up in my new clothes and going to some of the various events that I was hearing about, and there were several.

I do recall clearly though, being in front of the Savanna-la-mar Courthouse on the eve of independence – the Sunday night and at a particular point (just before midnight) the lights were dimmed; the union jack was lowered and the Jamaican flag raised for the first time.  Even at that age, I could tell that it was a momentous occasion.  There was a seriousness to it and a sense of history.  That moment always meant something to me and is in fact unforgettable.   Immediately after that, the fun began.  It was dancing in the street all night, and I think I recall fireworks.  It seemed as if the entire town was in the street; there were no class barriers (or so it seemed); people just celebrated and had fun.  It seemed as if we danced all night.  The next day we (my friends and I) went from one event to the other. Although I can’t recall any of them, that first Independence is etched in my memory as the best ever.” –  Shirley Porter – Jamaica