On this day in Jamaican history: Air Jamaica is born 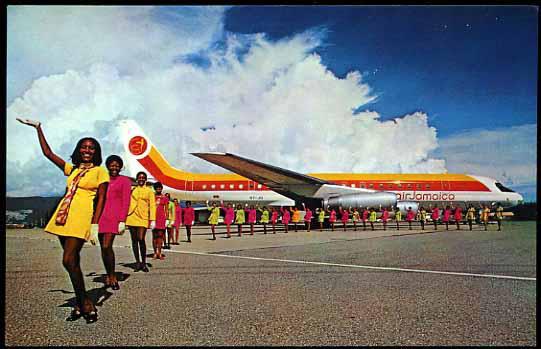 The operations of Air Jamaica began in 1966 with a leased BWIA 727-078 aircraft. In October of 1966, the entity was reformed into the national airline of Jamaica. As the national airline, it was owned and operated by Caribbean Airlines Limited from May 2011 when the government sold it until it ended its operations in 2015. After the sale, Jamaica’s government had a 16-percent ownership of Caribbean Airlines.

The first incarnation of Air Jamaica in 1963 occurred following the government’s decision not to invest in British West Indian Airways (BWIA). As Jamaica Air Service Ltd., the government was a 51-percent shareholder in the entity, while the British Overseas Airways Corporation (BOAC) and BWIA held 16 percent. The employees of BWIA in Jamaica were transferred to the new airline, and service to New York and Miami began on May 1, 1966. BOAC and BWIZ continued to maintain the leased aircraft until May of 1969. At that point, Jamaica’s government wanted to become independent of those entities and created a new firm, Air Jamaica Ltd.

Air Jamaica experienced rapid expansion during the 1970s as flights to Toronto, Montreal, Puerto Rico, Philadelphia, and other destinations throughout the Caribbean were added. In 1974, Air Jamaica began long-haul flights between Kingston and London’s Heathrow Airport that continued on to Frankfurt, Germany. Flights between John F. Kennedy International Airport and Kingston were also started.

The Jamaican government announced in 1989 that it would privatize the airline, which had been totally state-owned since Air Canada divested its 40-percent stake in 1980. A partial sale was held in May 1994 when the Air Jamaica Acquisition Group (AJAG) composed of Jamaican and Canadian investors agreed to take a 70-percent stake in the carrier at a cost of $26.5 million. Employees were to receive a five-percent share, while the Jamaican government took responsibility for its considerable liabilities. Merging the airline with other airlines in the Caribbean was already under discussion at the time among British Airways, Trinidad and Tobago Airways, Guyana Airways Corporation, and Leeward Islands Air Travel.

Air Jamaica continued to expand in the 1990s and took over the Kingston-Nassau route. It began a code-sharing agreement with Delta Airlines and opened a route to Phoenix, Frankfurt, London, Manchester, Santo Domingo, and Fort Lauderdale. By 1999, Air Jamaica operated nonstop services between Montego Bay and Los Angeles. In 1999, Air Jamaica was operating nonstop service between Montego Bay and Los Angeles with Airbus A320 aircraft.

After suffering financial losses, the Jamaican government again took full ownership of Air Jamaica in December of 2004. In March 2010, the airline had net losses in 40 of its 42 years of operation and had an accumulated deficit of about $1.54 billion.