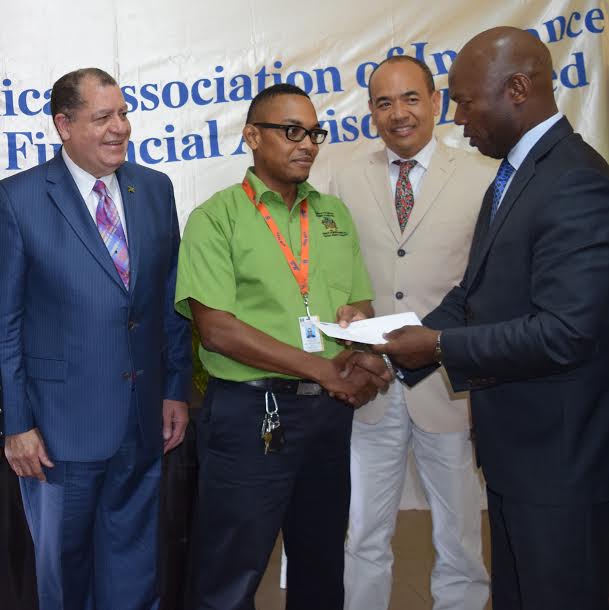 The Percy Junor Hospital in Manchester is now able to boost its intake of blood and blood donations, through the benevolence of one corporate entity, which Minister of Finance and the Public Service, Hon. Audley Shaw said is needed to support Jamaica’s development.

Minister Shaw, who also serves as Member of Parliament for North East Manchester, said more needs to be done to engage corporate Jamaica and the Diaspora in participating in philanthropic activities.

The Minister was speaking at the handing over of a cheque valued at $500,000.00 by the Jamaica Association of Insurance and Financial Advisors to purchase a Compact Blood Bank Refrigerator. The Southern Regional Health Authority which manages the PJH provided the additional cost of the refrigerator which values $1,092,648.84.

Turning to the importance of the Blood Bank Refrigerator, Minister Shaw noted that this vital piece of equipment will ensure greater levels of service at the hospital, which serves upper sections of four parishes including Manchester, Clarendon, St. Ann and Trelawny. He added that for such a central hospital which delivers services to some 70,000 persons annually, the best equipment and infrastructure must be provided.

“I give my commitment to supporting the development of the hospital, in ensuring that adequate equipment is here and in the modernization of the Accident and Emergency area of the hospital” Minister Shaw added.

He also pointed out that the PJH was built on the foundations of philanthropy as its owner Percy Junor donated the lands and building for the hospital which is now in its 72nd year of existence.

Chairman of the Southern Regional Health Authority, Mr. Wayne Chen noted that he also believes that the goodwill of Jamaicans in the Diaspora will support the country’s development. He added that many Jamaicans in the Diaspora are willing to assist and efforts must be made to utilize this opportunity. The Board Chairman also lauded the Jamaica Association of Insurance and Financial Advisors for its support to the hospital.

Senior Medical Officer of the PJH, Dr. Carlos Wilson explained that the Blood Bank Refrigerator provides safe and correct storage of blood and blood components and can store upwards of 60 units of blood. He added that previously, the hospital could only store 15 units of blood.