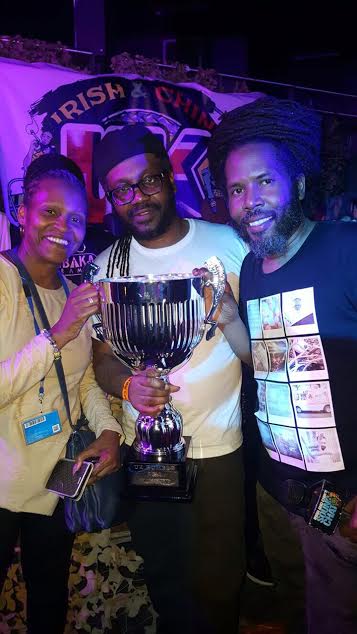 Known as a hotbed for sound clash, the UK erupted into an unforgettable battle of some of the country’s most feared sounds, including Natural Affair, XTAC 4×4, Classique, Immortal, Little Sample and Platinum Cartel at the “UK Rumble” on Saturday, June 17 in Leicester, UK. Upon musically annihilating all competition, Platinum Cartel became the winner of the first ever “UK Rumble” just before sunrise. The magical night unfolded before a sold-out audience, enabling the intriguing, competitive and musically charged Jamaican art form of sound clash to take center stage.

The night represented the inaugural and long awaited staging of “UK Rumble,” produced by Irish and Chin as a part of their Rumble Series, in conjunction with Reggae Girls Promotions and Real Authentic Music. Adding to the overall good vibes and energy of “UK Rumble” was its amazing host Seani B, a well-known UK radio personality, Grammy-award winning music producer and bonafide sound clash enthusiast, and special guest — the phenomenal “Can’t Breathe” artist Kabaka Pyramid.

It’s clear that “Platinum” isn’t just a precious metal, but also a commodity in the world of sound clash, with Platinum Cartel winning “UK Rumble” and Platinum Kids winning “US Rumble” this spring. Much to the winner’s credit, Platinum Cartel boasted a well skilled team at “UK Rumble,” including Chalice Nya, Junior Cartel and Blade, who strategically outshined their competitors. Hailing from South London, as a minority in the clash of predominately country sounds, Platinum Cartel realized from early that they had to be aptly equipped. Operating under their motto, “To war is to be victorious,” London’s most talked about clash sound did not disappoint.

“UK Rumble” opened to hard hitting performances from contenders, with XTAC 4×4 demonstrating the strongest showing during the non-elimination round. In the early rounds, Platinum Cartel maintained a steady pace, while Little Sample and Immortal evolved as clash top picks. As the clash progressed, the XTAC 4×4 buzz had simmered. A combination of missed tunes and failed connections saw the elimination of Natural Affair and XTAC 4×4 in Rounds 2 and 3.

The “Badlands” was carried by Immortal during Round 4, who had a serious showing and dub selections thus far. Once Immortal hurled a Chronixx dub, “UK Rumble” roared in praise and salutes. Round 4 saw the elimination of Classique, who struggled to amuse the crowd, even though they had the night’s biggest custom. Remaining in the clash were Platinum Cartel, Immortal and Little Sample. Platinum Cartel played consistently and thrilled with “clever” dubs, which Valerie of Reggae Girls Promotions pegged pre-clash as their “wow” factor. Little Sample also shined in Round 5. But, as fate has it, the not shy audience eliminated Immortal, despite them leading throughout the clash.

Platinum Cartel didn’t start clashing as a sound until 2010. However, their sound clash lineage runs deep, in part because of their expansive team’s skills and Chalice Nya’s rich clash history. Notably, he served as a lead MC for UK’s legendary Sir Coxsone sound during World Clash in 1998. As the first ever “UK Rumble” winners, current “London Cup Clash” champs and “Dubplate Kings” victors, now more than ever before, all eyes are on Platinum Cartel.

“I enjoyed every round of the ‘UK Rumble’……the speeches, the selections, the energy from the audience… all of it,” says Garfield “Chin” Bourne of Irish and Chin. ‘But most of all, my favorite part of the night was watching hundreds of excited clash fans pack the venue, while loudly expressing which sound they wanted to win.”

As a contender in Irish and Chin’s famed World Clash, Platinum Cartel will face off against defending champion King Turbo, Fujiyama (Japan Rumble winner), King Attarney (Canada Rumble winner), Platinum Kids (US Rumble winner) and the Euro Rumble winner. Irish and Chin, the world’s forerunning promoters of sound clash, who are proudly celebrating their 20th Anniversary year long, devised the Rumble Series as a platform for promising sounds from respective countries to gain international exposure and footing, as the clash industry’s pool of new sound clash stars has become stagnant.