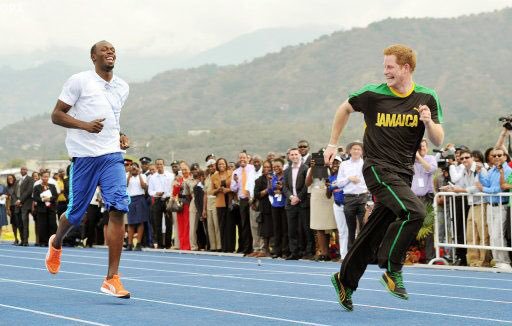 In the build-up to the royal wedding of Britain’s Prince Harry and Meghan Markle on May 19, 2018, YouTube has revealed the most-watched videos of the Royal Family. While the most popular video featuring Harry –a little girl stealing his popcorn at the Invictus Games – has received more than 18 million views, the second-most viewed video of Harry records his unsuccessful attempt to defeat Jamaican sprint champion Usain Bolt in a race in 2012. Bolt and Harry became friends during the Prince’s first Caribbean tour, and Bolt was introduced to Meghan when she accompanied Harry on a visit to the Caribbean to attend the wedding of his friend, the Olympic champion Tom “Skippy” Inskip. Describing Harry, Bolt says he is “really cool. He’s a really nice guy. I really enjoy hanging out with him. Every now and then we see each other because we travel around so I see him sometimes.” Bolt also has good feelings about Meghan, saying he believes everyone is happy because Harry, known as the wild member of the royal family, is settling down. “She’s definitely a nice girl,” Bolt said. Bolt also said he has never seen Harry as happy as he is now with Meghan. As the wedding day approaches, it is not surprising that Harry and Meghan are the most watched royals on the YouTube platform. Since their engagement was announced, video views of Harry and Meghan have risen by 175 percent. Videos of the future princess are extremely popular, with the most-watched clip featuring Meghan doing an interview with comedian Craig Ferguson, which has received four million views.