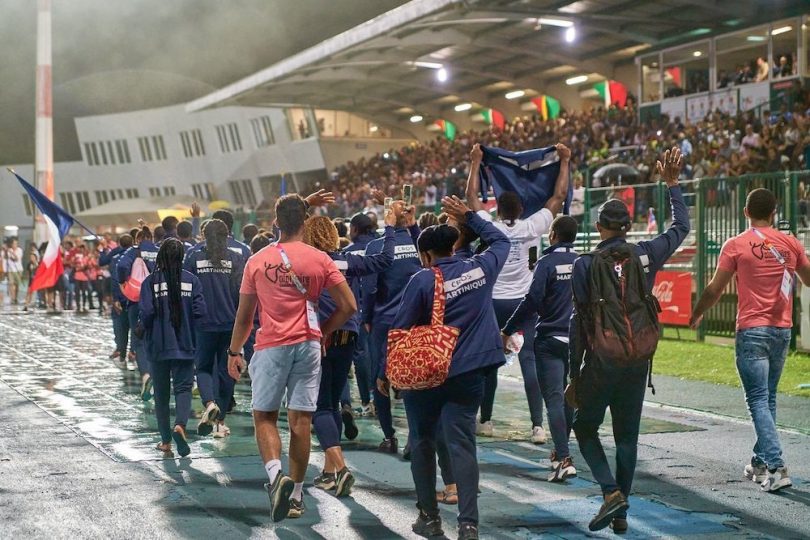 Significant news stories from around the Caribbean addressed the mid-term election victories in the United States of several candidates of Black Caribbean heritage, recognition of a project in St. Lucia that succeeded in restoring unique ecosystem, plans by Digicel to provide reparations to countries in the Caribbean, and the environmental disaster of seaweed smothering the coastlines of Caribbean islands. Also covered were stories concerning the election of a new Prime Minister in St. Kitts and Nevis, the re-election of Mia Mottley as the leader of Barbados, and the first female president elected in Honduras. The first Caribbean Games opened in Guadeloupe in June 2022, and a coalition of Caribbean countries was organized to push for reparations in response to the visit by the British Duke and Duchess of Cambridge to the region.

SEVERAL CANDIDATES OF BLACK CARIBBEAN HERITAGE WON MID-TERM ELECTION VICTORIES IN U.S.
On November 8, 2022, in the United States mid-term elections, Black Caribbean Americans were some of the biggest winners on the Democratic ticket. Several candidates achieved historic “firsts.” Jamaican American Westley “Wes” Watende Omari Moore became the first Black governor of the state of Maryland, gaining nearly 60 percent of the vote, and Democrat Maxwell Alejandro Frost, 25, who is of Cuban ancestry and a first-generation Afro-Cuban American, will be the first member of “Generation Z” to be elected to the US Congress after winning a House seat in the 10th Congressional District of Florida. Democrat Haitian American Sheila Cherfilus-McCormick won a term representing Florida’s 20th Congressional District with 74 percent of the vote, and Marleine Bastien won a seat on the Miami-Dade County Commission in Florida, the first Haitian woman to do so. Jamaican American Yvette Clarke won her New York Congressional seat with more than 82 percent of the vote.

PROJECT IN ST. LUCIA RECOGNIZED BY U.N. FOR RESTORING UNIQUE ECOSYSTEMS
A St. Lucia project designed to enlarge the restoration of the unique ecosystems represented by ocean reefs was recognized by the United Nations (UN). The UN stated that the project, “Small Island Developing States Restoration Drive,” focused on three developing small island states: St. Lucia, Vanuatu, and Comoros. The goals of the project included reducing pressures on coral reefs so there can be recovery of fish stocks. The restoration of ecosystems addressed seagrass beds, mangroves, and forests. The program is also designed to enhance the policy input of island nations that face rising sea levels and stronger storms resulting from climate change. As part of the UN’s World Restoration Flagship projects, the St. Lucia plan hopes to restore millions of jobs as well.

ST. KITTS AND NEVIS ELECTED NEW PRIME MINISTER
Dr. Terrance Drew, a medical practitioner trained in Cuba and the United States, was elected the new Prime Minister of St. Kitts and Nevis. Drew plans to implement reforms in the electoral system of the twin-island federation to eliminate delays like the one that prompted criticism of his election. He also said the government plans to review the situation of constituency boundaries that to not meet requirements established by law. Former Jamaican Prime Minister Bruce Golding, the head of an 11-member team of observers from the Organization of American States (OAS), criticized the long delay in providing the results of the general election on August 5, 2022.

CHAIR OF DIGICEL ANNOUNCED PLAN TO PROVIDE REPARATIONS TO CARIBBEAN NATIONS
The founder and chair of Digicel Group, Denis O’Brien, announced a plan to provide reparations for slavery to countries in the Caribbean. He made his announcement during the keynote address at CANTO 2022 at the Fountainbleu Hotel in Miami, Florida. The Repair Campaign involves former colonizing nations in Europe and will create an arrangement for investment funding for each nation impacted by the institution of slavery. The investment fund is designed to promote major projects in education, health, and agriculture, among other sectors, over a 25-year period.

CARIBBEAN COASTLINES BEING SMOTHERED BY SARGASSUM SEAWEED
Coasts of countries in the Caribbean experienced a huge influx of seaweed that is choking out wildlife, harming the tourism industry, and releasing harmful and toxic gases into the air. Over 24 million tons of sargassum seaweed covered the Atlantic Ocean in June 2022, an increase from 18.8 million tones in May, according to a report from the Optical Oceanography Lab at the University of South Florida. This was a historic new record, the lab reported. Researchers stated that while more research is needed to discover why the sargassum levels in the area are attaining new highs, the possible factors include higher water temperatures due to climate change, nitrogen-rich fertilizers, and sewage waste that provides fuel for algae blooms. There is so much algae in some areas that Guadeloupe issued a health alert in July 2022 as high levels of hydrogen sulphide coming from rotting clumps of seaweed, which can affect people with respiratory conditions. Experts first noticed the rising levels of sargassum in the Caribbean in 2011.

CARIBBEAN GAMES OPENED IN GUADELOUPE
The first Caribbean Games opened in Guadeloupe on June 29, 2022, as over 800 athletes and officials from 22 nations took part in the official opening ceremony at the Estadio René Serge Nabajoth in Les Abymes. Brian Lewis, the president of the Caribbean Association of National Olympic Committees (CANOC) was happy to finally see the Games become a reality after being delayed by the COVID-19 pandemic. He noted that history was made “against all odds” through the strength that comes from the unity of the relevant parties. Thomas Bach, the president of the International Olympic Committee, told the athletes and other participants to realize they were making sports history with the first-ever Caribbean Games. The symbol of the 2022 Games, which ran from June 29 to July 3, 2022, was the conch. Under-23 athletes in the Caribbean region competed in the categories of Athletics, 3×3 Basketball, Cycling, Futsal, Netball, Swimming and Judo. The Games were broadcasted on the Panam Sports Channel.

COALITION ESTABLISHED IN THE CARIBBEAN TO PUSH FOR REPARATIONS AFTER VISIT BY ROYALS
Groups in Belize, the Bahamas, and Jamaica formed a coalition to move for slavery reparations from Britain and to remove the British Monarch as their head of state. The action was prompted by the visit of Prince William and Kate, the Duchess of Cambridge, to the Caribbean, a tour that sparked protests at every stop. By the end of the visit, Jamaica and Belize had indicated their intent to become republics. Additionally, the Bahamas National Reparations Committee (BNRC), the Advocacy Network in Jamaica, and the indigenous Maya of Belize, criticized the royals and held demonstrations throughout the visit and declared they were united in calling for reparatory justice and condemning the colonial legacy of Britain.

GRENADA MARKED 48 YEARS OF INDEPENDENCE
The Caribbean nation of Grenada celebrated 48 years of independence with a military parade at National Stadium with the theme of “Overcoming our Adversity – Safeguarding Livelihoods – Protecting our Future.” The celebration featured several speakers who described its historic struggles and its path to a more prosperous future. No guests were permitted to attend the celebration because of the COVID-19 pandemic, but many took part in a live broadcast of the parade. Prime Minister Dr. Keith Mitchell noted the way the pandemic had changed their lives forever and used the opportunity to express concerns about the rate of vaccinations in the country. He strongly encouraged the people of Grenada to get vaccinated. He also spoke of national pride, the return of in-person learning among students, salaries for front-line public health workers, and plans for the government to absorb any rise in fuel prices above EC$15 per gallon.

PRIME MINISTER MIA MOTTLEY OF BARBADOS EASILY WON RE-ELECTION
Mia Mottley, the Prime Minister of Barbados, was re-elected in the general election. The election also re-elected the Barbados Labor Party (BLP) into the government via a sweep of 30 seats in Parliament. According to preliminary results, the BLP won all of the seats in the election, which Motley had called for 18 months earlier than the required constitutional deadline. Thus, the BLP became just the second political organization in the Caribbean – the other was Grenada in 2018 – to sweep all seats in consecutive elections. Mottley easily defeated Damien Griffith, the candidate of the Democratic Labor Party (DLP), receiving 3,216 votes to Griffith’s 476.

HONDURAS INSTALLED ITS FIRST FEMALE PRESIDENT
Xiomara Castro, the head of the Libre Party in Honduras, was sworn in as the nation’s first female president on January 27, 2022. Castro, 62, takes on her historic role at a ceremony in the capital city of Tegucigalpa. In her inaugural address, Castro promised to address the corruption and inequality that she described as “rampant” in the past administration. She also promised to enforce the country’s Constitution and to address poverty. Honduras faces several severe problems, including persistent violence, unemployment, inadequate health care and educational systems, and corruption.