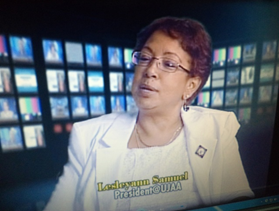 The Union of Jamaican Alumni Associations Inc. USA ( UJAA) president Lesleyann Samuel will appear on Beyond Focus, on Saturday May 14,2016 airing at 8:00 pm. Madam President will be informing the local community viewers about the state of the Union and its members.

Guided by host Lydia Patel, Lesleyann jump started the conversation by explaining exactly what UJAA is, and segmented into its rich history, focus and upcoming events. She invited Hubert Guscott the president of Wolmer’s Alumni Association of the USA, Inc. – New York Chapter, one of the founding members, to offer his perspective as a member association. This appearance will help UJAA to begin fulfilling a 2016 directive to inform the New York tri-state community of its rich history of good works for the children of Jamaica and New York.

Beyond Focus is aired on BCAT TV NETWORK: in all five boroughs on Verizon Channel 44, RCN Channel 84, Cablevision Channel 69, and Time Warner Channel 56.and can be viewed on YouTubes.  Tune in to hear Lesleyann’s and Hubert’s discussion on UJAA’s challenges of being a non-profit organization, its affiliations and partnerships within the Caribbean community.