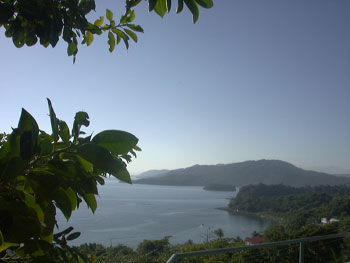 All Around Jamaica March/April 2003…Day 3
by Liz Maher

We woke up really early again….it’s the air, the sunrise, the eagerness to get out and explore, the coffee, the verandah…or maybe it’s just that we’ve been falling into bed before 9 each night….probably all of the above. I took many of my photos that morning, not sure if we’d be back or not. Again had a great breakfast of fruit and toast and banana/coconut shakes from Marcia. Chatted with Mrs S for awhile, she’s very nice and we had some good talks.

There are several guard dogs on the property, maybe 6. There is Twinkle, the mother of the others, and Cogi their dad. A great dane was brought over to visit from friends at Evita’s restaurant in Ochi to mate with Twinkle, the hope being these puppies will be somewhat larger than the current dogs. Twinkle was pregnant when we arrived but nowhere to be found this morning. Before too long Mrs S came and found us….Twinkle was having her puppies! She’d curled up in the vines and brush at the base of this HUGE tree (I have pictures of it with the others) and at that time, there were 4 little guys, one already nursing. The nursing one didn’t look like a great dane at all, in fact….it looked just like Cogi, small dog, yellow color! Way to go Cogi, he snuck one in the Ochi dog’s litter (actually 2…later Twinkle had 2 more puppies for 6 total). It was so sweet. Work had begun on a dog house for her earlier and this morning the project suddenly became more urgent. We watched awhile then gave the new mommy her space.

We checked out and said we’d probably come back in a couple of days and would call. High-fived the kids and headed down the road to say goodbye to Lib and Chef and Bill. After a little time there, we turned the car east towards Portland.

The drive from Port Maria to Port Antonio is awesome. Around every curve there is a bright blue-green bay, banana plantation or mountain view. I was excited to be going this far….Ochi is as far east as I’d ever been in Jamaica. Those mountains were getting bigger and closer with every mile. On the way we saw and stopped at several places, one was for a cast iron pot. P loves to cook and he loves good cookware. We bought a great rice pot w/lid, handmade, for $7. There’s a photo of the place in the pictures, it’s pink and the rasta that runs it was very nice to talk with. I think I told P a few more times how glad I was that he’d talked me into renting a car…we just couldn’t have done all this stopping where we like and going when we want without one. The east coast towns are fairly spread out too, taxis would be do-able but time consuming or expensive, one or the other, and I was really thrilled to have the freedom the car gave us.

We had not booked a hotel for this part of the trip but I had a few ideas. We decided to settle that first. We went past Port Antonio (wow what a beautiful and different town…on a steep hill set on twin bays, gingerbread Victorian looking stuff everywhere) and on to Fairy Hill to check out Goblin Hill Villas. We made our way up another steep potholed road and arrived. We saw a nice suite with a great view but it was $185…don’t think so. The restaurant was closed (they offer cook service in your villa only now) and the grounds were very well-kept but quiet. Nice views but this is the first place and way too much $ so we move on. We drive to the next stop, Frenchman’s Cove. Now I’d heard the rooms here were rather rustic but the beach is supposed to be great and the walk-in rate was maybe only $50, someone had said, so I really wanted to like it. Once we finally found it, which took a few passes and "is that it?"s, we pulled in. There were a few tour buses that had carried people to the beach parked there, otherwise it was pretty quiet. (So far all of PA is pretty quiet.) We saw a room in the "Great House"…..oh my. It looked more like a rundown shopping center to me…no landscaping, two story concrete block building with older furniture and kind of moldy carpets. The area around it was empty, but for a falling down shed of some sort, and things looked suspiciously swampy and mosquito-ey. P was definite about not staying even before we found out that the room would be $90! No thanks, we say, and head back to the car. We never did see Frenchman’s Beach, maybe next time. Back at the car, there appears to be a little bubble of some sort on the tire we’d had fixed. Not good, especially as we’re kind of hungry and have no home yet. We decide to keep an eye on it and press on. At this point P is saying if we don’t find a place we like soon, we should just go back to St. Mary and stay there.

We decide to try one more hotel, my last lead, Fern Hill Club. Again with the not-great and steep road up the mountain but we turn off and….wow. This is the place, we know it before we pull in. We see a standard room first ($77, great view, nice size room with AC, phone, etc.). Then we see the suite ($99) and we are sold. There are photos with my pictures…it has A/C, cable TV, a huge balcony with an unbelievable view of the mountains and San San Bay. There’s a living room, bedroom, huge bathroom, tons of storage space and so far everyone here is really nice. We walk back to the office to check in.

The front desk is in the main building which houses a restaurant (there’s a panoramic shot of it in the pics, even better view than our balcony), bar with pool table and ping pong and lots of sitting around space, the office and the standard rooms. The office is open-air, near a parking area and I stand maybe 10 feet from our car doing the registration paperwork. It’s really quiet up here…there are a few people staying but they are far from full. We hear birds chirping, the breeze rustling the trees…..and……then…..BANG!!!!! I cannot tell you how loud this sound was, it was more like a cannon than a gunshot. Everyone jumped and a couple of people ran out to see what happened.

It was our tire that had happened. The little bump we’d seen earlier had rather swiftly turned into a large bubble and the tire had apparently exploded sitting there in the sun. Once we were breathing normally again, we could only laugh at our good luck – could this have happened at a better time? We’d found the hotel we wanted to stay in, we weren’t driving…..good fortune was with us on this trip. P wearily walks over to get our good friend the spare out once again and changes the tire. A crowd has now gathered, hotel staff and a couple of taxi drivers are pointing and saying how they knew that tire was going to burst, a couple of kids gave P advice as he sweated in the sun. But he’s good at this now, and in under 5 minutes he has the spare on and the exploded tire in the trunk.

We are hot and starving so after a quick swim in one of FH’s 4 pools, we eat a very nice meal at the restaurant (P had very good beef stew J’can style and I had fish) and admire the view. I can still clearly see the steep lush mountains and changing colors of the water in the bay two weeks later (without a photo), I guess because I stared at it so much while we were there.

After another nap (you know how it is down there…) we decided to head down to the Blue Lagoon. It was 6PM and light would be gone soon and we hadn’t explored at all, other than hotels. Turns out BL is about 5 minutes from Fern Hill. At that hour it was free to swim (there is a charge during the day) so we ordered a snack and jumped into the bluest – and what an odd shade of blue, almost unnatural – water. Whoa – it’s freezing!! Wait, no it’s not…it’s only cold on the very top couple of inches, below that it’s warm. It’s salty from the sea (which is right there) and fresh from a spring that comes up some 180 feet below us. Eerie. One thing I didn’t expect was to be so buoyant. It’s nearly impossible to get down in this water, you just float in pretty much any position. I’m not sure why…pressure from the spring or something, but it was a lot of fun. There’s a dock to lay on and the restaurant is right over the water. I have pics of BL with the others. We had a great hour or two, some overpriced but tasty jerk, and headed back to FH.

We hung out at the bar for awhile, wishing for the energy to play pool or ping pong but only found we had enough to chat with the bartender and waiter for awhile. We made our way along the path to our room (one of the paths…this place is huge and riddled with little concrete paths through the gardens and lawns that take you to a nice view or swimming pool or library or villa) and fall into bed exhausted again. I give thanks for our luck so far and to be here and fall into a deep sleep.