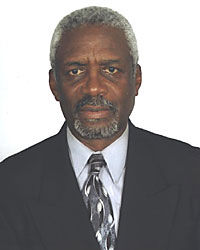 Mr. Martin was born in Jamaica, West Indies and in 1965 migrated to the United States to attend College. He holds an undergraduate degree from Howard University (1969) in Washington D.C., an MBA (1972) in Finance and Investment from Pennsylvania State University and a Juris Doctorate (1976) from the Washington College of Law of the American University in Washington DC.

In 1972, Mr. Martin commenced work as an Accountant with Fannie Mae, the nation’s largest provider of residential mortgage loans. Upon graduation from law school, he was transferred to Atlanta and commenced work in Fannie Mae’s Atlanta legal department. In that capacity he provided in-house legal advice to Fannie Mae’s business divisions and was a member of the region’s management team. He was at various times responsible for legal services to Fannie Mae’s marketing department where he drafted and reviewed complex contracts for purchases of single family mortgages from numerous mortgage lenders. He was also actively involved in the establishment of Fannie Mae’s Mortgage Backed Securities program which, prior to his retirement from Fannie Mae, had grown into a huge (billion dollars) portfolio.

After 30 years at Fannie Mae, Mr. Martin retired to open his own law practice in Stone Mountain. His areas of emphasis are Immigration, Real Estate, Wills, Business Transactions and Family Law.

Since 1997, Mr. Martin has been Jamaica’s Honorary Consul in Atlanta. In this capacity he provides consular services to the Jamaican community in Georgia and to foreigners seeking entry visas into Jamaica. He also meets regularly with Georgia business leaders interested in transacting business with the country of Jamaica.

Mr. Martin’s other community involvements include former member of the Board of Directors of his neighborhood YMCA; Board member of the Georgia Council of International Visitors; member of the Georgia Consular Corps; past Vice Chair of the Atlanta Sister Cities Commission; and Chairman of the Atlanta-Montego Bay Sister Cities Committee. As Chairman of the Sister Cities Committee, he is credited with organizing medical doctors and nurses for volunteer service at annual health missions in Montego Bay, Jamaica. Recently Mr. Martin was appointed by Governor Purdue to serve as Board Member of Hemisphere, Inc., an organization responsible for seeking to locate the secretariat of the Free Trade Areas of the Americas in Atlanta.

Mr. Martin is a member of the District of Columbia, Georgia and Maryland Bar associations. He is also a member of the American Bar Association and has numerous other professional affiliations.

Mr. Martin currently resides in Stone Mountain, Georgia. He is married to Hazel and has two adult sons, one who is an Associate with a New York law firm and the other a consultant with an accounting firm in Washington DC.