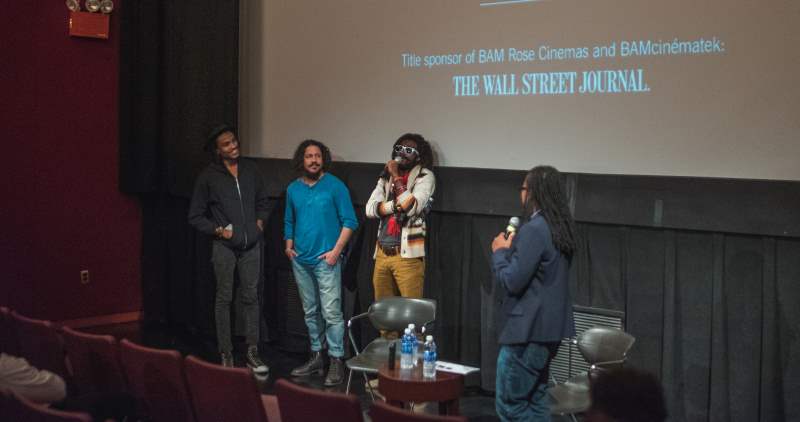 Better Mus Come is a story inspired by the 197os gang wars in Kingston, Jamaica fueled by guns and corrupt political organizations. During the Q & A session, a parallel was drawn between the film’s narrative and the situation in Tivoli Gardens that dominated headlines in 2010. The issues of both eras were relevant across history. In Storm’s words, “It was a certain set of young men empowered to be violent on behalf of the big man dem, the politicians/political parties directly…And when they become too big to control, too much of a problem, they send the security forces to take them out.” He went on to say that the Green Bay Massacre is the true story that the film was linked to, “I took creative license, I created the characters and I wove them through a real history.” Storm, who had previously studied and worked in the film industry in the U.S.A., spoke of the freshness of Jamaica and need to tell a story at home. He noted that for many of the actors, it was their first time on film. It was also Storm’s first feature-length film. The actors remarked that “It was great because everybody was doing it like they wanted it to be the best ever.”

The look of the film, the high contrast and saturated colors, captured the interest of the audience. That was credited to Jamaica having “the best sun.”

At the end of the session, Sheldon graced the audience with a performance of his original dub poetry which he had performed for Storm when he first auditioned for the film.

Sheldon and Everaldo have recently released a music album through their group No-Maddz, “Sly and Robbie Presents No-Maddz”, which is available on iTunes.

Better Mus Come is available for streaming on NetFlix and iTunes. As for upcoming projects, Storm is working on a feature film, Sprinter, about a high school Track star. He has been teaching both a feature film development and short film development course as the filmmaker in residence at the University of the West Indies in Kingston, Jamaica and is excited to encourage young filmmakers to pursue their own projects. At the university, he will continue to deliver lectures every semester to film students and other students. He can be found on social media via the handle @stormsaulter and more information is available on his websites: www.stormsaulter.com and www.newcaribbeancinema.com

The goal for the Caribbean Film Series is to engage diaspora folks from all over the region; people from Trinbago coming to see Jamaican films, Grenadians coming to see Haitian films etc; not only seeing films from their respective countries.

The Caribbean Film Academy released the following statement: “The next film in our series is “Cristo Ray (2013) directed by Leticia Tonos. Set amid the violence and poverty of a shantytown, where undocumented Haitian immigrants clash with Dominicans, this gritty drama follows the struggle between two half brothers over the woman they both love. Haitian-born Janvier takes a job as the bodyguard for Jocelyn, the site of a powerful kingpin, who he soon discovers dated his Dominican half-brother Rudy. When Rudy learns the two have fallen in love, his places for revenge threaten disaster for the entire community. This vibrantly shot update of Romeo and Juliet is a powerful indictment of racism and poverty in the Dominican Republic. [96mins. In Spanish with English subtitles. Thursday, Dec 3rd at 7:30pm]”