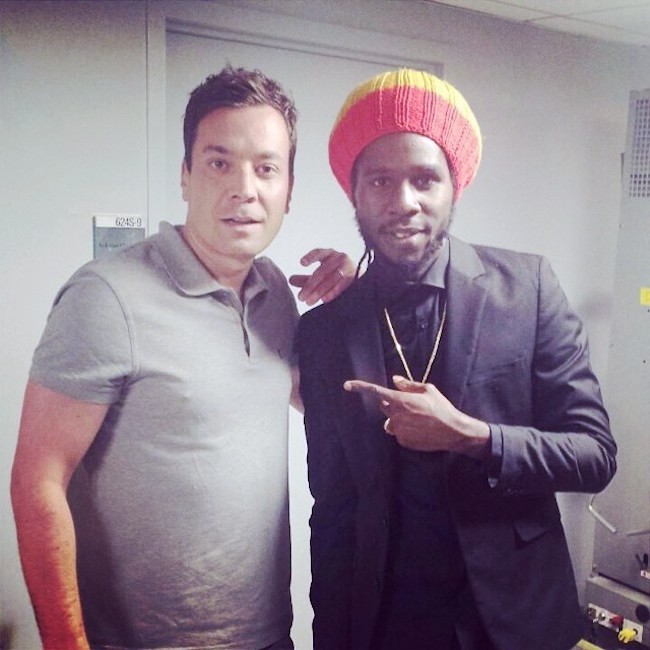 On Friday, February 24, 2017, reggae artiste Chronixx will be featured on the “Tonight Show,” the popular late-night television program in the United States. This will be his second appearance on the show. On his previous appearance in 2014, Chronixx, whose given name is Jamar McNaughton, performed his hit “Here Comes Trouble,” which had 12,000 downloads following the performance, according to Billboard, and Chronixx ranked Second on the Digital Reggae Singles chart.

Chronixx was born in 1992 and attended St. Catherine High School I Spanish Town. The Jamaican dub artist’s stage name is a replacement for the original name of “Little Chronicle” he received in recognition of his father, the singer “Chronicle.” Chronixx began writing music at a very early age; he wrote his first song “Rice Grain” at age five and began recording at age 11. By age 14, he was producing and building riddims. He toured for the first time in 2013, traveling to Europe with his own band, Zincfence Redemption.

He caught “Tonight Show “ host Jimmy Fallon’s attention in 2014 when Fallon was on vacation in Jamaica. This led to the musicians’ first appearance on the program at the request of Fallon.

About Jimmy Fallon
Emmy Award and Grammy Award winner Jimmy Fallon brought NBC’s “The Tonight Show” back to its New York origins when he launched “The Tonight Show Starring Jimmy Fallon” from Rockefeller Center. Fallon puts his own stamp on the storied NBC late-night franchise with his unique comedic wit, on-point pop culture awareness, welcoming style and impeccable taste in music with the award-winning house band, The Roots.

Fallon began his TV career with “Saturday Night Live” in 1998, where he quickly became an audience favorite. Known for his spot-on impressions, hilarious sketches and his stint with Tina Fey as co-anchor of “Weekend Update,” Fallon spent six successful years on the show. In March 2009, he returned to NBC and took over the “Late Night” legacy with “Late Night with Jimmy Fallon,” a show that consistently garnered attention for its viral videos, celebrity games and A-list guests.

Since the show’s 2009 debut, Fallon and the “Late Night” team have earned much acclaim, including three consecutive Emmy nominations for outstanding variety series (2011-13). “Late Night” received a nomination for best talk show at the 2013 Critics’ Choice Television Awards, having won the category in 2012. In 2013, Fallon was honored with his second consecutive People’s Choice Award for favorite late-night talk show host and received a nomination in the same category for the 2014 event. Fallon and the “Late Night” writing team received an Emmy nomination for outstanding writing for a variety, music or comedy series in 2011. He won an Emmy in 2010 for the show’s website in the interactive media category and received the Webby Person of the Year Award in 2009. Fallon has also been recognized with several nominations at the Teen Choice Awards throughout his career.