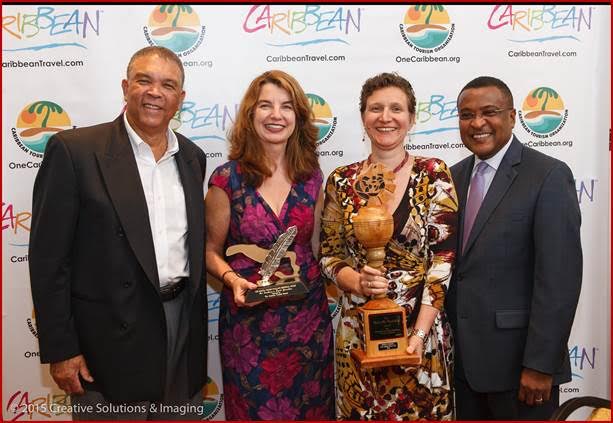 The Jamaica Tourist Board (JTB) honored Ruthanne Terrero, Vice President of Content and Editorial Director of the Questex Travel Group and Roberta Garzaroli, President of the Atrebor Group, Inc., with awards of excellence for their stellar efforts in marketing the Caribbean as a premier travel destination.  Roberta Garzaroli was presented with the Marcella Martinez award while Ruthanne Terrero received the Marcia Vickery-Wallace award.

The Caribbean Tourism Organization’s (CTO) Caribbean Media Awards Luncheon was held on June 4th at The Wyndham New Yorker Hotel.  It was part of the activities to mark Caribbean Week in New York 2015.

Established in 2004, the Marcella Martinez Award is presented annually for unparalleled achievement in the design and implementation of successful programs to strengthen and support Caribbean tourism. The award is named in honor of Jamaican Marcella Martinez, who dedicated her extraordinary career as a public relations professional to the promotion of tourism in the Caribbean.

In presenting the Marcella Martinez Award to Roberta Garzaroli, Jamaica’s Director of Tourism Paul Pennicook noted that, “Roberta embodies the spirit behind this award. For those who know her, her passion for the region is unrelenting and unquestionable. For over 20 years she has been a dedicated champion of the marketing and development of the region following in the footsteps of her friend and colleague Marcella Martinez.”

Roberta is a deserving recipient of this award. Her contribution to tourism in Jamaica and the region has been far reaching as she has worked with the Jamaican American Chamber of Commerce, Air Jamaica, Island Routes, Children of Jamaica Outreach, and the American Foundation for the University of the West Indies.

The Marcia Vickery-Wallace Award was established in 1987 as a tribute to Marcia Vickery-Wallace, former editor of Brides Magazine. Each year the JTB, in conjunction with the CTO, dedicates an award in her memory to a journalist who has followed in her footsteps with the same dedication to promoting the Caribbean region.

JTB’s Deputy Director of Tourism, USA Sales, Donnie Dawson presented the award to Ruthanne Terrero, Vice President of Content and Editorial Director of the Questex Travel Group. The portfolio of the Group, which includes Luxury, Travel Advisor, The Informed Traveler, Travel Agent magazine, and International Meetings Review, as well as a series of related digital products.

As the editorial director of several publications, Ruthanne has been covering the Caribbean for more than 15 years. In presenting the award, Mr. Dawson lauded her insight, awareness, and in-depth knowledge as she seeks to ensure the Caribbean remains top of mind for visitors in search of a memorable vacation.

As a native New Yorker, the Caribbean is Ruthanne’s go-to vacation spot for rest and relaxation and to enjoy some of the most beautiful scenery in the world.  Ruthanne describes her ideal Caribbean vacation as spending time at a resort that’s truly indigenous to the region and relate to the true vibe of the island. “I love the entire Caribbean. Each destination has its own personality. There is nowhere else like it on earth,” she exclaims.

During the Luncheon, Destination Jamaica also copped three awards: Best Feature in a Consumer Newspaper for its joint submission of Baz Dreisinger’s New York Times feature On a Caribbean Rum Trail, Best Broadcast Feature for its submission of the Better Cooking segment with Jamaican sisters, Michelle and Suzanne Rousseau aired on CBS Atlanta and Best of the Best, which is the top overall award won by freelance writer Baz Dreisinger. The Caribbean Media Awards Luncheon was co-sponsored by the Jamaica Tourist Board.