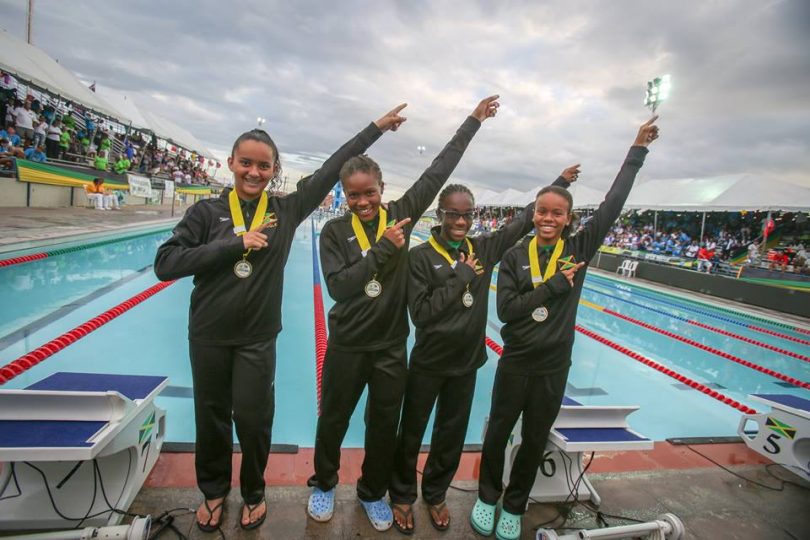 On the last day of the CARIFTA Swimming Championship 2018 at the National Aquatic Centre in Kingston, the Jamaican girls took all of the sprint freestyle titles. On April 3, 2018, the swimmers in the girls’ 11-12 age category started the winning streak, with a total team time on the relay coming in a 1:55:47, breaking the Championship and national age group record of 1:55:77. The team members were Safiya Officer, Isabella Sierra, Morgan Cogle, and Aliyah Heaven who had the fastest leg at 28.14. The initial leg of the 13-14 category was contested, but by the last leg there was no doubt as to who would win with the Jamaicans Zaneta Alvaranga, Amore Hunter, Sabrina Lyn, Emily MacDonald finishing with a time of 1:50;79, which was just a little behind the Championship record of 1:50:77. In the 15-17 category, the Jamaican girls – Shaun Johnson, Brianna Anderson, Naomi Eaton, and Gabrianna Banks who turned in the fastest split of the night with 26:16 – won the gold with a new national age group record of 1:48:42. In the final event of the meet, the 200-meter freestyle relay, the Jamaican girls in the 11-12 category immediately established the tone for the event by eliminating nearly two seconds from the previous record. After that, the Jamaicans swept all the girls’ relay contests of the night. The 13-14 girls smashed another record when Banks, Vale, Anderson, and MacDonald clocked their 1:50:77, which was almost three seconds faster than the rest of the field.

The CARIFTA Aquatics Championships is an annual, age-group aquatics championships for the Caribbean. It has been held since 1985, and is similar in form/origin to the track & field/athletics event: the CARIFTA Games. The event is held under the auspices of CANOC, the Caribbean Association of National Olympic Committees.