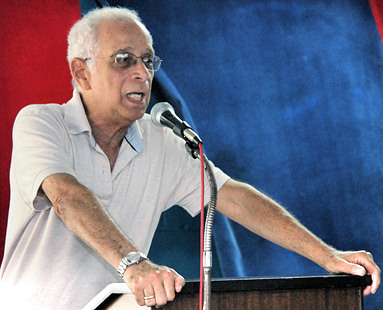 Norman Girvan, Jamaican economist, political scientist, and academician, who died in 2014, has posthumously received the Friendship Medal from the Council of State of the Republic of Cuba. His wife, Jasmine Girvan, traveled to Havana to accept the award on his behalf. Fernando Gonzalez, Hero of the Republic and vice-president of the Cuban Institute of Friendship with the Peoples (ICAP), bestowed the award in recognition of Girvan’s work in human rights. Jasmine Girvan said she was honored by the acknowledgement of her husband. Norman P. Girvan was the secretary general of the Association of Caribbean States, as well as head of the National Planning Agency of the Government of Jamaica. He received an appointment as personal representative of the United Nations’ Secretary General in regard to a border dispute between Venezuela and Guyana. He visited Cuba several times and received the Honoris Causa Doctorate from the University of Havana.