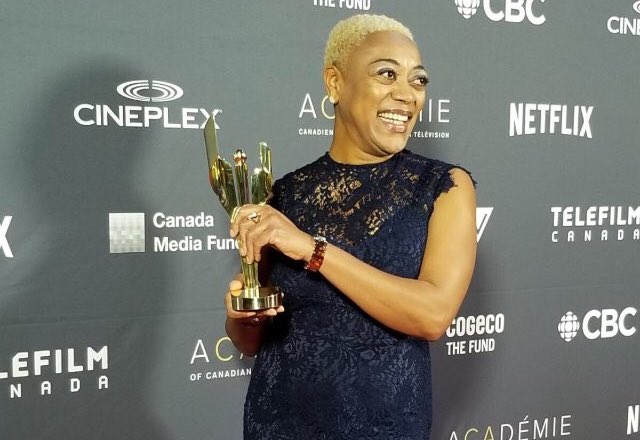 Robinson was born in London in 1968 to Jamaican parents. The family moved to Jamaica when she was two years old, and she has always strongly identified with her Jamaican heritage. She then moved with the family to Alberta, Canada, when she was a teenager. She has been active in the arts since she was a child, singing in choirs and acting in school plays. She studied communications and theater at Mount Royal College in Calgary prior to working as a professional actress in the 1990s.

During her stage career, Robinson originated the role of “Marie-Joseph Angélique” in the play “Angélique” by Lorena Gale in 1998. For her performance in that role, she was nominated for a Betty Mitchell Award for Best Actress in 1998. In 2002, she played a number of stage roles at venues like the Stratford Festival, and portrayed “Clytemnestra” in three plays, consecutively, including Aeschylus’s “Agamemnon,” Jean Giraudoux’s “Electra” and Jean-Paul Sartre’s “The Flies.” In 2006, she was honored with the Dora Mavor Moore Award nomination for Outstanding Performance by a Female in a Principal Role in a Play (Large Theater) for her performance in “Two Can Play” by Trevor Rhone. She appeared in several productions in 2009, including the gender-reversed role of “Prospera” in “The Tempest” by William Shakespeare and won the Elizabeth Sterling Haynes Award for Best Supporting Actress in a Play for her performance as “Mrs. Muller” in the Citadel Theatre production of John Patrick Shanley’s “Doubt.

Robinson has had regular roles on television programs like “The Line,” “Shoot the Messenger,” and “Frankie Drake Mysteries.” She was nominated for a Gemini Award in the Best Supporting Actress in a Television Film or Miniseries in 2011 at the 25th Gemini Awards ceremony for her role as “Cherlene” in “The Gospel According to the Blues.” She was recently recognized for her work in “Ghett’a Life” (Salento International Film Festival Best Actress Award), “King, Working the Engels,” “Saving Hope,” “Lars and the Real Girl,” “H2O,” “Slings and Arrows,” and “Schitt’s Creek.”