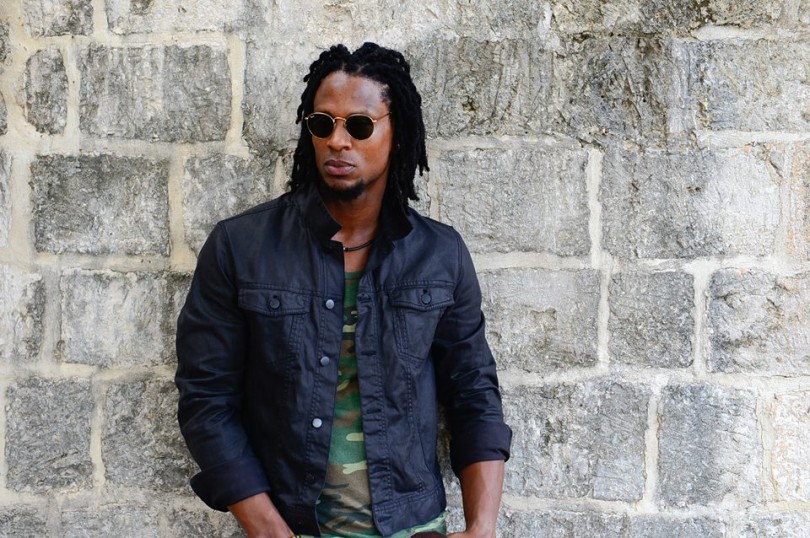 Born and raised on the beautiful island of Anguilla, Omari Banks found his musical calling at a young age when he first took the stage in Milan, Italy to sing alongside his father Bankie Banx . The emotions conveyed through music touched his heart and a star was born. Founding his inspiration through an eclectic genre of music, Omari went on to perfect his craft by writing and becoming a proficient guitar player. The budding star went on to win multiple talent shows but as a teenager turned his attention to the sport of Cricket, where he excelled first locally, then regionally and ultimately on the world stage. In 2003, Omari Banks became the first Anguillan to play test cricket for the West Indies. He went to travel the world for twelve years as a professional athlete, but despite his success in sports, Omari never lost his passion for music. He became renowned for traveling with his guitar and giving impromptu performances; even as he focused on cricket.  In 2010, Omari made the decision to move on and pursue his passion for music. With a lifetime of experiences and life lessons, he immersed himself in songwriting and perfecting his musicianship. He dedicated himself to his music and created his debut album, “Move On” recorded in Kingston, Jamaica and Houston, Texas.  The album was very well received as a mélange of his musical influences, and can be effectively described as a“contribution to a legacy his dad, Bankie Banx started in the early 70s.” Armed with his guitar Omari aims and strives to bring his words to life.

Tell us about your background and how did you get started in reggae music?
I’ve been around music my entire life, my dad being a reggae artiste who has traveled the world playing music as well as producer of the longest running privately owned music festival Moonsplash I’ve been blessed to be in a environment of my music from childhood .

Tell how about your song “No Point To Prove”? Did you write the song? What was your inspiration to write the song?
The song no point to prove I wrote and it was truly a special song for me because I really got an opportunity to get out some feelings that I had inside as write it’s very therapeutic it was a pleasure working with the legendary Peetah Morgan.

What is the best compliment you have gotten about your album “Move On”?
I’ve got many compliments on that don’t, on which stands out is a lady I met told me she was going through a Divorce and she listen to the song morning before going out the house and it gave her strength the move on with courage each day

What is the reggae scene like in Anguilla?
Reggae has really catches on Anguilla in the last couple years we have always had bands that has played cover material but in recent times more bands have started to do more original stuff which Is good for music on the island. True intentions and British Dependency Gershwin lake Parables Band are some other local groups that do original material.

What was the first Reggae song you ever heard?
I can’t remember the first reggae doing I heard but I’m guessing it would be one of my dad’s songs so I would say, “Prince of a Darkness”

What style of reggae is played often in Anguilla? [Dancehall, Lovers, Rock, Conscious etc.] What style do the majority of fans seem to prefer?
I think there is a good mix, I think Dancehall is popular, but so is lovers rock and conscience reggae music, it depends on the vibes of the times. It’s a good mix.

Was the fact that Reggae is English and Patois a barrier?
No I have found that, I made music in an relate to from my experiences and what I have in my head and heart. I’ve never been one to look at barriers and see myself as a limitless being.

Who is your favorite Reggae Artist?
My favourite reggae artiste , that would be hard to one ame, Si have a few, Jah Cure, Taurus Riley, Romain Virgo, Chronixx and Morgan Heritage would be on my list of favorites.

Where do you think Reggae will be in 10 years time? And in Your country?
My hope and dream is to see reggae music reach a main stream with consistent penetration, it is a music I believe the world needs because of its message of love, unity and Social awareness. In my country I believe it dill continue to grow and we can numerous artiste/Bands making waves on a global stage.

In some countries you might see people wearing a Jamaican-style hat with fake dreadlocks attached when they attend reggae concerts and other events. Do you see anything that you see in your country?
I’ve been to Jamaica. Any times to okay sports, as well as many promotional tours. I live Jamaica, the food is awesome 🙂

Have you ever been to Jamaica?
I’ve been to Jamaica. Any times to okay sports, as well as many promotional tours. I live Jamaica, the food is awesome 🙂

Do you have many/any Jamaican people living in Anguilla?
Yes we do have Jamaicans here in Anguilla, and yes they bring culture align as well.

If you were stuck on a deserted island and given the choice of 2 albums to put on your ipod which artist would it be?
Stuck on an island two albums, hmmm ?.. Bob Marley “survival”, Stevie Wonder “Songs in the Key of Life”