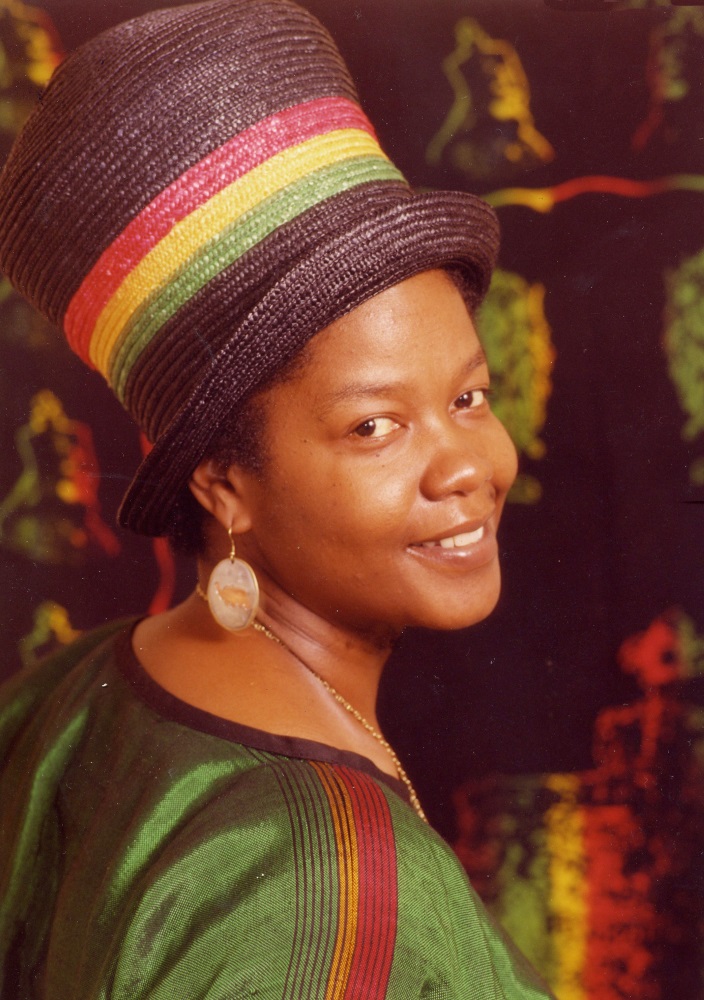 Believe it when you see and hear it.

Reggae’s Black Cinderella gets the last word in the latest Meryl Streep flick “Ricki and the Flash.”

To end the movie, it is the voice of the popular deejay AKA Sister Carol sounding the lyrics from her 1996 Grammy-nominated “Milk & Honey” single from the 1996 “Lyrically Potent” CD that signals conclusion.

The song echoes three times throughout the attraction before the credits roll.

For more than a year, the respected foundation deejay has remained hushed since filming a cameo role with her husband. Together they portrayed a couple at the airport

Born Carol Theresa East in Kingston, Jamaica, the cultural griot not only sings the last notes in the Tri-Star Pictures’ release which opened two weeks ago, she was also tapped for a role.

“They first wanted me to be a TSA agent,” Sister Carol told Caribbean Life “But I don’t wear pants so that was it for me.”

Next she was asked if along with her husband/manager Dean Wauchope she would portray a couple at the airport waiting on a line.

At that point Sister Carol’s “hey my girl, join the line” would cast the deejay as a player.

The line did not make it for the director’s cut but three times, Sister Carol’s distinctive voice interjects a presence for credit.

That the film opened on her mother’s Aug. 7 birthday is another source of pride for the deejay, known internationally as Mother Culture.

“My mom would have been so happy for me,” she said.

Fact is as only one of three females to receive a Grammy nomination in the Best Reggae Album category, during her lifetime Sister Carol’s mother had many reasons to be proud of her achieving daughter.

Through some of her successful years, she managed to take her mother to Africa for the first time when they both visited Cote d’Ivoire.

This is not her first experience with a big-screen attraction, since 1986 the respected foundation singer has had film forays with Anne Hathaway, (Rachel Getting Married) Denzel Washington (Mighty Quinn), Michelle Phiffer and Alec Baldwin (Married To The Mob) Melanie Griffith (Something Wild).

Her “Wild Thing” in 1988 introduced new audiences to a deejay who could also act on demand performing as Dottie.

Two years later she was again tapped for a one-liner when Rita said: “Hello Gorgeous” in the film “Married To The Mob.”

By 2008, she was cast to portray a guest with Hathaway at a wedding ceremony.

“Anne was genuine, real and a down-to-earth person with me, I will not forget how nice she was on the set,” Carol said.

Although in all the film outings, the common denominator has been director Jonathan Demme,

the deejay/actress cannot say enough about the filmmaker whose films have consistently depicted real characters.

“Sometimes we don’t talk for a long time. But out of the blue one day he will just pick up the phone and invite me into his new project. I cannot begin to tell you what a loyal person he has been all these years.”

This time around Demme chose 19-time nominated Academy Award winner Streep to star in a film about a female musician who chose a career in rock and roll over being a wife and mother to three children. The character’s rock star career hampered any hope of being a traditional woman. She sung in bars, dressed unconventionally and eventually was shunned by a community of dissenting neighbors. How she redeems herself is a summer treat for film aficionados.

“Sister Carol has a few songs in movies like ‘Principle’ in “Mighty Quinn” ‘Original Drum’ in “Failure To Launch,” and ‘Dread Natty Congo’ in “Rachel Getting Married” but this is the first time that they’ve used her song three times in a movie,” Wauchope added.

“All I can say is that I am thankful to the Divine Creator for it,” Sister Carol humbly stated.