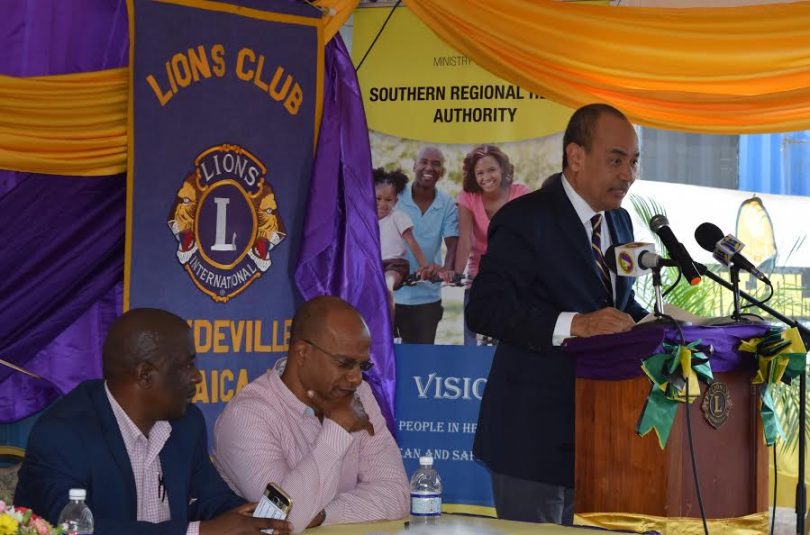 The establishment of a regional pathology lab to serve the diagnostic needs of the southern region will soon be a reality through the public/private partnership between the Southern Regional Health Authority (SRHA) and the Lions Club of Mandeville.

The initial phase of the project is estimated to cost some $38 million and was launched on Friday, February 3 on the property adjoining the Mandeville Regional Hospital where the lab will be constructed.

Minister of Health, Dr. Christopher Tufton whose remarks was delivered by the SRHA Board Chairman, Mr. Wayne Chen lauded the Lions Club of Mandeville for its numerous projects which have benefited the Mandeville community noting that the construction of the pathology lab is “one of the great examples of the public/private partnership that the Ministry of Health is keen on fostering.”

Dr. Tufton noted that with the establishment of an optimally equipped and staffed regional pathology lab, full testing in Haematology, Chemical Pathology, Microbiology, Immunology, Surgical Pathology and Cytopathology will be achieved with the aim of providing state of the art diagnostic services in biochemical, molecular and cellular pathology in the future.

Regional Technical Director of the SRHA, Dr. Michael Coombs explained that though laboratories have been established in the parishes in the region, Manchester, Clarendon and St. Elizabeth, the services that the laboratories are able to provide are limited.

Dr. Coombs said the Southern Regional Health Authority welcomes the support from the Lions Club as the laboratory should become a successful platform for career development for its employees and trainees as well as facilitate and conduct research activities.

Lions Club member, Dr. Hopeton Falconer explained that the Lions Club decided to partner with the SRHA to establish the pathology lab after realizing that the Regional Pathologist was working in borrowed space and equipment which results in delays in laboratory results. He used the opportunity to appeal to corporate Jamaica to come on board to support the creation of the pathology lab.

The establishment of a regional pathology lab will among other things allow for earlier intervention, prevention and treatment of patients; timely analysis of surgical pathology illnesses; reduction of the reliance on other laboratories which will reduce their workload and the overall turnaround time for results. Project Launched: Members of the Lions Club of Mandeville unveil the directional sign to the Pathology Lab which will be built shortly.
Rate this post