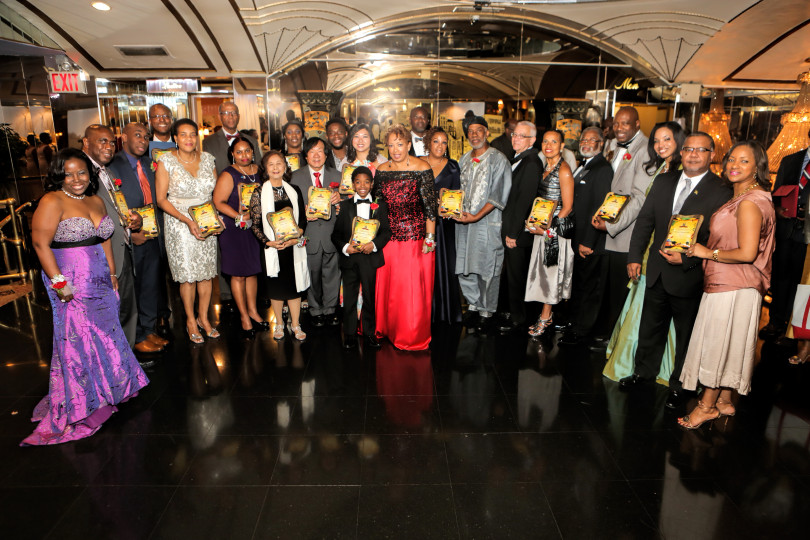 In his speech delivered on Saturday September 26, 2015 at the 25th anniversary celebration of the Union of Jamaican Alumni Associations (UJAA), the Hon Ronald Thwaites, Minister of Education, noted that “Effective communities make good citizenship.”  The following morning at its breakfast meeting, the President of UJAA, Ms. Lesleyann Samuel noted that “Effective citizens make good communities.”  The similarity in the two phrases were striking – reflecting a main theme of one of the most exciting galas in the Jamaican Community to hit New York in recent times.  Twenty five persons were honored, symbolic of the 25 years of the existence of the organization.  Mr. Dervan Malcolm, talk show host of Power 106 FM in Jamaica, could not have said it better when he commented that the UJAA event is the “Oscars of Philanthropy” in our community in New York.
Under the patronage of the Consul General of Jamaica to New York, Herman G. LaMont, the various categories of awards spanned a wide spectrum of work by both individuals and organizations that were being honoured. The categories of awards included: Lifetime Achievement Award to Andrew Morris of Sam’s Caribbean Marketplace, the Humanitarian Award to Dr. Trevor Dixon of JAHJAH, the Trailblazer Award to Pat Chin of VP Record, Community Service Award to Sabrina HoSang Jordan of Caribbean Food Delights, the Cultural Ambassador Awards to the Coalition to Preserve Reggae Music and the Caribbean Cultural Theatre, the Distinguished Educator Awards to Sheree Palmer-Sparkes and Dr. Michael Wiltshire. I was humbled to have received the Diaspora Leadership in Education Award.

In an unplanned history-making moment, Minister Thwaites – a descendant of one of Jamaica’s National Heroes – George William Gordon, presented the UJAA’s Service to Our Youth Award to Nikiki Bogle – a descendant of Paul Bogle, another of Jamaica’s National Heroes. Additionally, a welcomed surprise of the evening was Ms. Marcia Griffiths, the Queen of Reggae, who, joined by her son, delivered two of her great hits that brought the 350 plus patrons to a frenzy as they drank in her performance.

But the highlight of the evening was the impassioned, animated and thought-provoking speech by Minister Thwaites, who challenged the members of the Diaspora to help meet the needs and fill the gaps in the Early Childhood level of education in Jamaica. The Minister skillfully held his audience’s attention for 40 minutes, which seemed like only 5 minutes, capturing the essence of issues the Diaspora wanted to hear.  The atmosphere in the room was marked by rapt attention, as the audience listened with wonderment at the minister’s speech. His was delivered like a true orator, statesmanlike and full of passion, noticeably without even a notepad for guidance – a rare talent indeed.

The minister encouraged the UJAA to devise a mentoring program for our children at an early stage, so that they can see and feel hope. He reinforced – “how important is it, for a child in Jamaica to know that a member of the Diaspora once lived in their township and attended the same school that they are currently attending.” The Minister noted that “ten dollars goes a long way to help a child who doesn’t have it in the first place.”

Minister Thwaites informed the audience that the government had not done enough in early childhood education, but is now doing something about it.  He said that the government committed to providing breakfast and lunch for over 125000 early childhood students.  He promised to end the shift system in schools because it brought more problems than the benefits derived from it. He remarked that the government’s goal is to bring the amount of time teachers spend teaching, in line with successful education models throughout the world.  He noted that currently teaching time in Jamaican accounts for only about 61% of possible teaching hours per day, compared to 85% in other parts of the world.

The Education Minister said that the Ministry is seeking to bring back technical and vocational subjects to high schools and to match them to the needs of the market.  Mr. Thwaites said that we should be preparing our students for opportunities abroad. He charged the UJAA with helping to mentor our students and encouraged parents and teachers to understand the new marketplace and empower students with the requisite skills to take on jobs wherever in the world they migrate.  The Minister reminded the audience that we are in a global community and our students must be taught English so that they are prepared for conversation, and must practice and be ready to speak Standard English to compete in this global marketplace.

The Compere for the evening, Mr. Irwine Clare OD, excellently and tastefully executed his duties, educating his audience on the history of UJAA, while acknowledging the willingness of the Honorable Ronald G Thwaites and his wife to participate in this very special occasion which occurs at five year intervals.