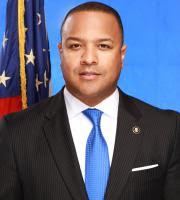 The Jamaican Chamber of Commerce of Atlanta, Inc. (JAMCHAM) has announced that Cassius Butts, Regional Administrator for the US Small Business Administration (SBA) will be the keynote speaker at the chamber’s official launch, scheduled for Saturday, June 27th at the Marriott Century Center Hotel, 2000 Century Boulevard NE, Atlanta, GA 30345 at 6:00 pm.

Cassius Butts was appointed by President Barack Obama in 2011. He is responsible for the delivery of SBA programs in Alabama, Florida, Georgia, Kentucky, Mississippi, North Carolina, South Carolina, and Tennessee. During his appointment, Cassius has managed oversight of three record breaking years for SBA lending in Region IV. Nearly $12 billion in SBA-backed loans were awarded to small businesses within the aforementioned eight states.

The Jamaican Chamber of Commerce of Atlanta was formed to provide a voice, access and empowerment for Caribbean businesses in the Metro Atlanta area and beyond. Referrals, education, advertising, lobbying and networking are some of the services the chamber lists among its benefits.

The chamber is registered in the state of Georgia as a 501(C)(6) nonprofit corporation.