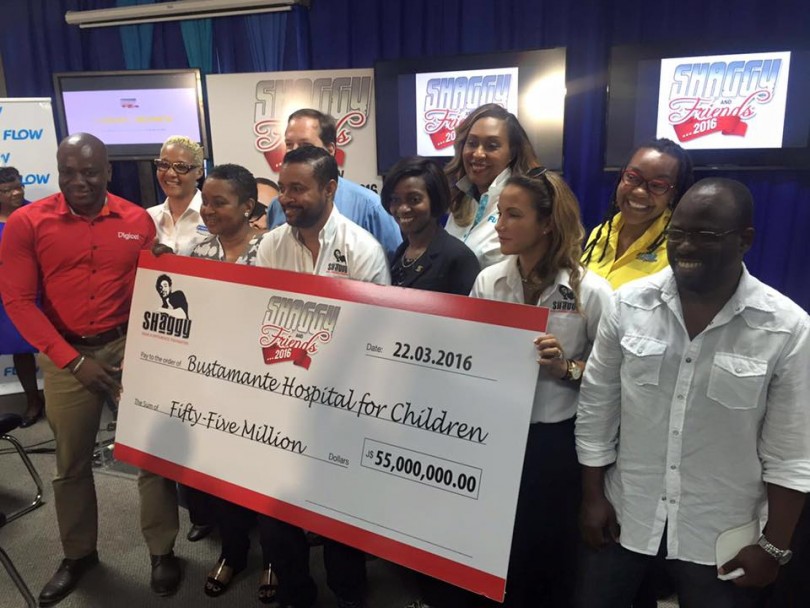 The Bustamante Hospital for Children received a donation of $55 million from the Shaggy Make A Difference Foundation. The funds are the result of the Shaggy and Friends Concert at Kings House in January 2016. Bustamante’s chairman, Kenneth Benjamin, stated that the biennial concerts have allowed the hospital to purchase over 450 pieces of medical equipment to date. He noted that more than 77,000 children receive treatment at the hospital every year. Bustamante is the only children’s hospital in the Caribbean and treats children from throughout the region. Before presenting the donation, Orville “Shaggy” Burrell, director of the Shaggy Make A Difference Foundation, thanked all the performers and sponsors who supported the effort. The January concert represented a partnership with iHeartRadio, which provided a broadcast of the event to 18 stations in the United States. William Mahfood, managing director of the Wisynco Group, gave the Foundation a check for $8 million, funds that came from a three-dollar donation that was made from every purchase of specially marked WATA bottle. Stewart’s Auto, a new car dealership, donated $1.5 million to the Foundation. Since its launch in 2009, the charitable concert event has raised over $255 million for Bustamante Hospital for Children.