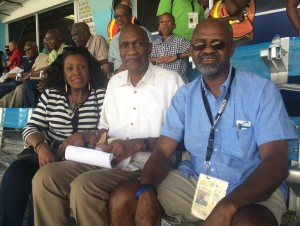 A team of executives, volunteers and key community supporters from the-not-for-profit organization, Team Jamaica Bickle (TJB) is currently in Jamaica to lend their support to the hundreds of athletes in competition at the annual ISSA/Grace Boys & Girls Championships, currently taking place at the National Stadium. The team will be cheering on the extraordinary talent that will be on display over the five day meet.

“Our volunteers and supporters are extraordinary says Irwine Clare, Snr., CEO and Founder of the organization. They have taken time from their businesses and work (at their own expense) to make the trek, not only to show support but because they are also fans of this fantastic sport. We are thrilled to serve our athletes and we are proud when they do well”, he continued. “We work very hard each year to ensure that they are comfortable when they are at the Penn Relays and will continue to do so. We thank the community for its support in making it all happen.”

TJB has been the mainstay of support for athletes for the past 21 years at the annual Penn Relays Carnival, held at the University of Pennsylvania in Philadelphia, providing a plethora of services including meals, transportation, booking and coordinating hotel accommodation and chiropractic care.

Having had the distinction of being the first Jamaican/Caribbean sponsor at the Penn Relays, TJB opened the doors and consequently the very lucrative Diaspora and mainstream markets to mega brands such as Grace Foods, (now title sponsor), J
amaica Tourist Board, VMBS, LIME, Digicel, Caribbean Food Delights, Golden Krust, Tower Isles and others who now participate or have participated in the three day carnival, gaining exposure to the over 115,000 spectators on hand and millions more through the NBC Saturday national broadcast.

The team will host a reception to kick off its 2016 activities at the Jamaica Pegasus on Monday, before returning to New York on Tuesday to continue its preparation for the Penn Relays.