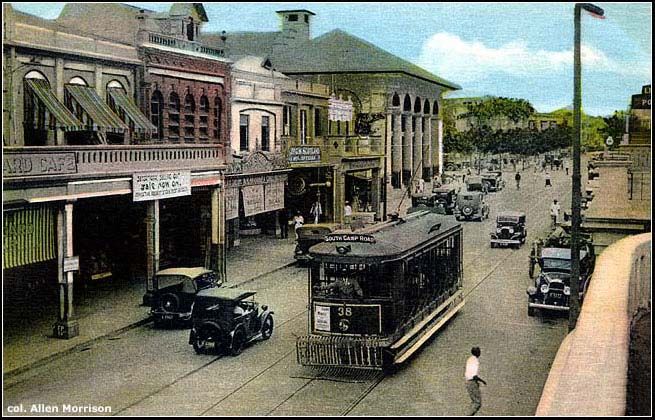 The following article was provided to us by Allen Morrison the operator of  Electric Transport In Latin America. – The island of Jamaica is about 50 miles wide and 150 miles long. Its north coast is about 100 miles south of Cuba and 100 miles west of Haiti. Jamaica was a British colony from 1655 until 1958; it became a fully independent state in 1962. A steam railroad that opened in 1845 between its capital, Kingston, and Spanish Town was one of the first railroads in the Americas, preceded only by lines in the U.S., Canada and Cuba. Kingston’s population was about 50,000 in 1900, is about 100,000 today.

The Jamaica Street Car Company inaugurated a horsecar system in Kingston on 13 November 1876. Trams circled the central area and reached Rae Town on the east, May Pen cemetery on the west, and Constant Spring 6 miles north of the city [see map]. The vehicles came from John Stephenson Co. in New York. No suitable picture of them could be found, but here is a JSCC token [col. AM]:

West India Electric Co., registered in Canada, purchased the horse tramway on 4 December 1897 and began electrification. WIEC’s president was an officer of the Montreal Street Railway Co., which seems to have supplied Kingston’s first 30 electric trams. (They were similar, but not identical, to open cars that ran in Montreal in the 1890s.) Kingston’s first electric line, from the tram depot on Orange Street to the foot of King Street [see map], was inaugurated on 31 March 1899 [postcard, col. AM]:

Jubilee Market was opposite the northwest corner of Victoria Garden [see map]. Tram routes were identified by colored lights and destination boards on the ends and sides of the roof – as in Montreal. This tram is signed “Half Way Tree & Hope Gardens” [postcard, col. AM]:

WIEC’s trams did a good business bringing produce from rural areas to the city’s markets. Extra cars were placed on the Constant Spring and Hope Gardens lines [see map] [postcard, col. AM]:

Trailer cars bore uneven numbers (11, 13, etc.). In the early years of the 20th century United Fruit Co. ran banana trains over WIEC tracks from Constant Spring to Jubilee Market [see map]. The cars were pulled by electric locomotives at first, but later were attached to WIEC’s trams [postcard, col. AM]:

Terminus of the Rockfort Gardens line. The photographer was facing east [see map] [postcard, col. AM]:

Tram 34 at the terminus of the Hope Gardens line at the end of Papine Road [see map]. Note inscription “The West India Electric Co. Ltd.” on the side of the car [postcard, col. AM]:

An earthquake in 1907 took 800 lives and damaged large sections of the Kingston tramway system. Five cars were destroyed, but partial service resumed within a few days [postcard, col. AM]:

The 1920s brought new prosperity to the city and a new operator to the tramway system. On 25 May 1923 the WIEC was absorbed by a new Canadian organization, Jamaica Public Service Co., which thereafter provided all electric utilities on the island. The McGraw Electric Railway Directory of 1924 [see BIBLIOGRAPHY] reported 39 passenger motors cars, 1 motor service car, 1 motor freight car, 6 trailer freight cars and 2 locomotives operating on 26.62 miles of track in Kingston. The photograph below was taken on King Street about 1930 [see map] [col. AM]:

This colorized postcard shows another section of King Street in 1930 [see map] [col. AM]:

The World Survey of Foreign Railways, published in 1933 [see BIBLIOGRAPHY], recorded 44 passenger motor cars, 5 passenger trailers and 2 freight trams running on 43 km of track in Kingston. Apparently the company acquired many more vehicles after 1907 (although no more orders were received by U.S. builders). The photograph below was taken in 1939 at the end  of the Hope Gardens line [see map]. The car is in the same position as tram 34 in a postcard view above [col. AM]:

The last photograph on this page was taken in November 1944. Scene is the terminus of the Constant Spring line, where, 40 years earlier, United Fruit Co. loaded its banana trains for their journey over tramway tracks to the city [see map] [col. AM]:

Jamaica Public Service Co. closed the Kingston tramway system on 10 May 1948. JPSC claimed that it could not afford to maintain the right-of-way or construct needed extensions. The entire system, all lines, ran until the end. Company records indicate that, because of a public protest, the Rockfort Gardens line [see map] continued operation for a few more months, until approximately August 1948.

Detail of the previous photograph. An unusual aspect of the Kingston tramway was that all its passenger cars seem to have been identical – and remained identical and unchanged throughout their lives. They were superbly maintained, but were all sold for scrap in 1949. What a shame that one of these magnificent vehicles – 50 years old but as good as new – was not preserved!

BIBLIOGRAPHY
(in order of publication)

H. Holgate. “An Electric Tramway in the British West Indies” in Cassier’s Magazine (New York), 11/1898, pp. 74-82. Description of the power plant. Not much about the tramway.

“Open Cars for Kingston, Jamaica” in Brill’s Magazine (Philadelphia), 5/1907, pp. 90-91. Interesting description of the Kingston model. An excerpt is reproduced on this page.

For information on other tramways see Electric Transport In Latin America. If you have comments, criticism or suggestions,please e-mail Allen Morrison.