Jamar Rolando McNaughton, better known by his stage name Chronixx, is a reggae artist of Jamaican descent. Starting his career in 2003, Chronixx’s brand of music has been termed as the revival of reggae while musicians such as Jah Bouks, Dre Island, Kelissa, Kabaka Pyramid, Jah9, Jesse Royal, and Protoje have also played their part in the cause. Over the course of his career, Chronixx has worked as a singer in the reggae genre only with the label ZincFence. He is known to produce music that echoes anti-war themes, resiliency, and romantic declarations.

Chronixx is the son of singer “Chronicle” and he changed his former stage name “Little Chronicle” – which he got after his father – to his current stage name. Influenced by his father, Chronixx started writing songs from quite an early age – he wrote his first song “Rice Grain” at the tender age of 5. Chronixx’s popularity grew largely in 2012 after his performances in various festivals including the Reggae Sumfest and today he is a reggae star. So to educate our readers of some of the best songs of Chronixx, in this post, we have compiled an interesting list of “The Top 10 Chronixx Songs”. 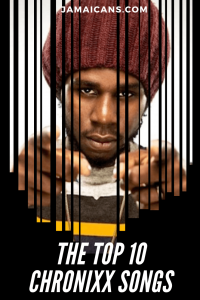