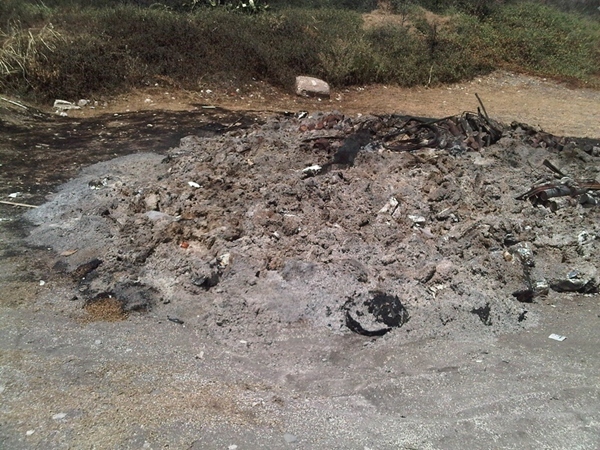 On the morning after the 2012 beach clean up of Ft Rocky by the Jamaica Environment Trust (JET), one of our staff members went to check on the site. There he found the mountain of waste taken off the beach by over 2,000 volunteers uncollected – the National Solid Waste Management Authority (NSWMA) had been said to be “on their way” the previous afternoon. In addition, he found a pile of burning waste – drugs, he assumed – continuing the long standing practice of the burning of waste near the beach by the Police. For the third year running, JET had either raised the money or begged equipment and removed this residue before the clean up. JET had also written to both the Police Commissioner and the Jamaica National Heritage Trust asking that this practice cease – the JNHT having responsibility for the heritage site of Ft Rocky. Yet there it was happening again, the day after beach clean up. It was too much. I put my head in my hands and I wept.

The previous Wednesday, I had been taken by helicopter to the Pedro Cays, one of the 64 clean up sites around Jamaica. There, I confronted a very Jamaican circle of hell – some 400 Jamaicans, 90 miles out to sea, in shacks and meager shelters, without running water, sanitation or garbage management on a 10 acre island, surrounded by the Caribbean Sea. We landed on Middle Cay and the downdraft of the helicopter sent the lighter items of garbage flying to fall unnoticed in the sea. The Masked Booby birds, some sitting on eggs, held their ground in the small patches of sand and vegetation adjacent to a burning dump, the scale of which is difficult to appreciate, unless you have stood there, and tried to come to grips with the staggering amount of waste produced by a relatively small number of people. Nor was the garbage confined to the dump area. Horrific as that was, it was worse to see the waste flung everywhere, on every square inch of what should have been and could yet be an idyllic small island, a refuge for seabirds, surrounded by healthy coral reefs, teeming with fish.

Where, I wondered, do our attitudes to waste come from? Why is it that so many of us are comfortable with strewing our waste where we live, even as these practices make us ill, result in the flooding of our property, and threaten land, sea and life itself? At beach clean up every year, people who spend hours cleaning up the beach still litter where they eat. One corporate sponsor provided food for their volunteers in Styrofoam trays, obviously giving no thought at all to the irony of cleaning beaches and adding to the pile of waste afterwards.

I took two members of the press with me to the Pedro Cays. After 21 years of running an environmental non profit group, I know if it is not in the press, it is on no one’s agenda. After the story hit the media, I was invited to meet with the Minister of Agriculture and Fisheries on the day before beach clean up. We packed ourselves into a too small meeting room, chock full of numerous representatives from various ministries. A lecture was delivered about there being no need for anyone to be rude and the dangers of having these issues in the press, because now ANYONE can know what is happening in Jamaica. Yes, there is the conch industry located on the Pedro Bank, and most of the conch is exported. Suppose the buyers find out how it is produced… no, that wouldn’t look good. Perhaps there might even be Repercussions.

Everywhere you look in Jamaica, there is manifest failure to govern. The political parties are about appeasement, about making their supporters happy, about making themselves look good, about launches and photo ops. If any action – no matter how essential – is going to lose votes, it can’t be taken. So although a 1940s study stated that Jamaican fisheries were overfished, because there were “too many men chasing too few fish,” there has been steadfast refusal by the Ministry of Agriculture and its Fisheries Division to take the necessary steps to manage our fisheries. What is needed is known: No spear fishing, no night fishing, no Hookah gear, no seine nets, increase in pot mesh sizes, no possession of conch and lobster in closed seasons, the establishment of large fish sanctuaries, protection of nursery areas (specifically mangroves and seagrass beds), protection of herbivorous fish (like parrot fish), strict enforcement, heavy fines and confiscation of boats and equipment for breaches. But it is not done. None of it is done. Oh every now and then some individual fisher is taken to court and fined a few hundred dollars and his fish pots confiscated. He’ll be back at sea within a month.

The Ministry of Agriculture is a big building, as are all government buildings. These buildings contain floors of people, car parks of vehicles, multimillion dollar budgets. Yet government agencies in Jamaica declare themselves to be helpless, without the required budgets, without the needed resources, action has to be approached with decades of caution, issues must be studied, the studies must be revised after years of failure to implement a single recommendation, the studies themselves must be studied. The people in the buildings collect their pay, money is borrowed to meet those payrolls, and the politicians bluster and insist on civility.

It is a perfect storm of abdication of responsibility. We abdicate our personal responsibility for the waste we ourselves generate, we feel entitled to consume and throw away whatever we want wherever we want and someone else must pick up after us. The responsible government agencies point fingers at each other. And the politicians make the usual promises, look to blame the other political party and know without question this issue will blow over as the next national scandal claims the headlines.

The filthy beach of Middle Cay is a perfect symbol of Jamaica itself – an island wasted by the people who live on it.

This article was orginal published by Diana McCaulay on her blog.

About the Author
Diana McCaulay is an award winning Jamaican writer and a lifelong resident of its capital city Kingston. She has written two novels, Dog-Heart (March 2010) and Huracan (July 2012), published by Peepal Tree Press in the United Kingdom. Both novels met with critical acclaim and have broken local publishing records. Dog-Heart won a Gold Medal in the Jamaica Cultural Development Commission’s National Creative Writing Awards (2008), was shortlisted for the Guyana Prize (2011), the IMPAC Dublin Award (2012) and the Saroyan Prize for International Writing (2012).

Diana founded the Jamaica Environment Trust (JET) in 1991 and still serves as its CEO and guiding force. In that position, she has interacted with all levels of Jamaican society from the Prime Minister and cabinet officials to rural Jamaicans displaced by development and fishers denied access to beaches. Diana’s writing contains an authenticity and vibrancy derived from her active participation at so many levels of Jamaican society. She was a popular newspaper columnist for The Gleaner (1994-2001) and her short fiction has been published by The Caribbean Writer, Afro-Beat, Lifestyle Magazine and the Jamaica Observer’s literary supplement, Bookends.