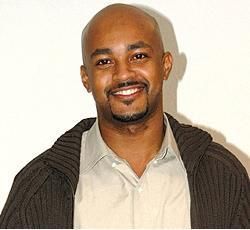 Television producer Courtney Bennett is no new kid on the block. He has produced some of the most popular daytime television programmes in the United States. Courtney immigrated to New York from Jamaica at the age of 15. A summer internship on Montel William’s talk show “Montel” led to a firm offer of employment. Bennett made quite an impression on Montel and within months was promoted to Associate Producer.

Bennett’s mission is to produce programmes that reflect the true sense of Caribbean culture and this persistent passion led to the establishment of Island Vision Productions four years ago with his business partner Kelvin Barton. Currently, Island Vision has several programs in various stages of production, which promise to deliver on their credo of bringing excellent ideas to life. The best is yet to come!

Marcia: Courtney, how does anyone prepare to be a television writer?

Marcia: How did a kid from Jamaica end up being a Producer for Divorce Court, Texas Justice and Power of Attorney?

Courtney: After migrating to the U.S. and completing high school, I went on to college where I earned a degree in Media Arts from Coppin State College. This is where I developed the necessary skills, which eventually led to me producing for some of the top national daytime shows.

Marcia: How did your career progress?

Courtney: Well, a chance summer internship with the Montel Williams Show guaranteed me a position with the production upon completing college. After securing a production assistant job, I was promoted to an Associate Producer within a few months. With almost four years under my belt at Montel, I decided to move to Los Angeles and landed a job with Divorce Court as a Post Production Producer. During my 3 seasons with Divorce Court I also served as a post producer for the launch of Power Of Attorney and Texas Justice which were also produced by Twentieth Television (Fox)

Marcia: What is your mission as a TV Producer?

Courtney: My mission is to produce programs that accurately reflect different parts of our everyday lives.

Marcia: Your specialty is reality-based shows, is that the way your career started?

Courtney: Yes, my career definitely started out with reality-based shows and I have since developed a liking for them. I find that with realty-based shows you can reach people in ways that some of the fictional shows are not able to. One of the challenges I faced with reality-based projects is that a lot of people tend to look for BIG name actors or stars. I have since converted quite a few people with the Bar Talk comedy that you don’t need a BIG name stars to produce great comedy.

Marcia: What motivates you?

Courtney: My motivation comes from the enormous support from people/viewers who understand the need to produce programs that reflect “our” culture. I enjoy reading the e-mails from people who send their words of encouragement after watching my work.

Marcia: Who are some of the people who influenced you? Has anyone given you any encouragement, and how has it felt to get it?

Courtney: Someone who influenced me was Montel Williams even though he has no idea what a HUGE role he played in my career. He is one of those positive people who gave me an opportunity of a lifetime. Some people who encouraged me are my Mom and my college coach, Donald Webster. Others include members of the Island Vision team, Kelvin Barton and Bobby Baker who attended college with me and has always been very supportive.

Marcia: If you could do it over again, would you choose television?

Courtney: Without a doubt! I have gained and incredible amount of experience during my years working in the television industry. It sure was not an easy road but an enjoyable one. I must add my TV career is not over, just taking a hiatus to work on my own projects.

Marcia: How long has Island Vision Production been established?

Courtney: Island Vision has been around for four year now and steadily growing.

Marcia: Do any actors, or real life situations, give you ideas for your next project?

Courtney: I won’t say I will not consider putting together a project for a particular actor or actress but right now most of my ideas are based on real life situations. The Bar Talk series for example, came about while sitting in a local Bar in Jamaica and hearing some of the patrons have a great time telling each other jokes. Jamaica Stories, which will be the next project, released, was produced based on my reflections of growing up in Jamaica and listening to a lot of the stories (duppy, superstitions, old people or granny sayings, etc) that are fast disappearing from our culture.

Marcia: What is your best experience as a Television Producer?

Courtney: Hmmmm, I’d have to say working for Montel who won an Emmy during my last season with the show.

Marcia: How do you think the Internet will assist film, TV and plays?

Courtney: The Internet plays a great role by getting information to people quickly. From the comfort of their homes, people are now able to sit back and enjoy watching or reading about things they have an interest in.

Marcia: Courtney, I’ve seen Bar Talk, but I haven’t had a chance to view any other of your work. Please share with us some of your other work, past or future

Courtney: Bar Talk was the first release from Island Vision Productions but you can look forward to at least two more projects from Island Vision this year. Jamaica Stories will be released in August and the follow-up to Bar Talk in November. Jamaica stories is a 90-minute documentary which chronicles a lot the old Jamaica. From games we played as children to stories our grandparents told us, this documentary promises to not only educate but also entertain. Jamaica Stories will have families around the world sharing their own memories of Jamaica. Bar Talk 2 delivers another knock out round of reality based adult humor.

Marcia: Your famous last word is?

Courtney: Make your own dreams and aspirations a reality…do not wait for someone else to make things happen for you!

Marcia: Thank you for your time and best wishes to you and Island Vision!