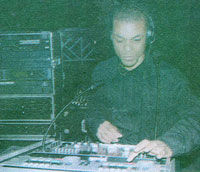 In doing this interview, I had no idea what to expect from Marshall Redwood, who runs a Christian Reggae Club in Jamaica called the Prayz House. The Club plays Christian Dance Music, which includes Techno, Hip Hop, R& B, Soca, Calypso as well as Reggae and Dancehall. The overall mystique of being a successful nightclub owner/operator/developer of a Christian Reggae Show on mainstream radio whose objective is to evangelize the Ghetto youths using hardcore dancehall Christian Reggae music has followed him throughout his career. Marshall is a very busy man with a great personality.

After asking him a series of questions, he took charge of the interview, much to my delight. I found him infectious with his passion for what he believes in. The love of his people, his God and his quest can be heard in what he has to say below:

Marshall:Thank you for allowing this interview with you, Marcia. I have noticed for quite some time that the Christian Youth of our country have no where to go with their energies after youth meetings and they don’t necessarily want to go home to watch TV but want a place to hang out with their friends. So they sometimes end up at the secular night clubs. Then they go home feeling wrong because it still doesn’t feel right plus they come home smelling of cigarette smoke as if they smoke.

The next issue is for the fact that Christians have a problem with fellow-shipping or socializing and a concept that everything ought to be endured and not enjoyed and so this idea was not readily welcome by the church majority as they held on to some unscriptural concepts for a lot of years and even the ways in which we evangelized was in a narrow minded way.

I also wanted to create a place for new talent to be exposed and develop themselves for excellence in their gift(s). So with these thoughts and burdens in my heart, I contacted some people who I thought could help me turn this dream into a reality and from April 26, 1997, this Christian Club came to life as Christian Club Mix which is presently called the Prayz House located in the Sunshine Complex Balcony, 137 Maxfield Avenue, Kingston 10 (in Half Way Tree) Kingston, Jamaica.

The entertainments we provide are as follows: Table games such as dominoes, card games (No gambling), Ludo, Checkers, Pictionary, dance marathons, talent expos, Karaoke (periodically) and we have a guest artist every club night. Believe it or not most of the dances in the Prayz House were created by yours truly to enhance the main purpose of Prayz House, which is to praise Yahweh in the dance.

We target all age group because we are the only club like this but we encourage people to come with their peers so they can all feel comfortable there. This last weekend a club was just formed in Montego Bay by a brother named Marisko. The club is called Socialize. I can’t remember any time that we ever had to deal with smokers or drug dealers. We serve: soft drinks, fruit drinks, soups, hot dogs, jerk chicken.

We start from 9pm and we finish with prayer between 1:30am & 2am. We are in the stages of starting from 5pm as of the 25th of April 2003, called “the Prayz House after work Nyam” or something like that. (laughter)

I host a program on Sunday mornings from 7am-9am, called the “Holy Flow”. I am allowed to play the same type of music that I play at the Prayz House and I enjoy every second on the show. At the Prayz House we do have the regular faces but we still have a lot of new faces as well. We plan to expand to every Parish and eventually in the Caribbean but the immediate step is toward the tourist resort areas so that tourists who are Christians can be a part of something they would comfortably enjoy.

In terms of security, we use them occasionally but most of the time we don’t need them as the patrons to the club are co-operative and polite. (Thank God).

Prayz House gets busy from 10:30pm to the end, yet dependent on the way we promote the various events, we have people who may come before 10pm. We can accommodate up to 300 patrons or a little more standing. We have 7 people who work with Prayz House.

“Change”, a now defunct reggae gospel group was one of my major influences, especially when I started Prayz House and most of the churches were praying against my club. I remembered when the church did the same to them and they stood the tides until they got a recording contract with an American recording company then people started giving them the support.

My favourite quote is from St. John 10:10. “JESUS came that we might have life and have it more abundantly.” I quote it and am still exploring that scripture. I want as much people worldwide to know that there is an alternative entertainment where you don’t have to do drugs or smoke or fight or strip or have strong drink or sexual carousing to have fun. There is much more fun in the Prayz House, for where the spirit of the Lord is there is liberty.

Marcia: My hat goes off to you, Marshall! Kudos for taking on the impossible and making it possible. I wish you continued success on behalf of all of us here at Jamaicans.com.

Marshall:Thanks for the interview sister but I know you know that with Yahweh all things are possible. See you at the Prayz House one day.