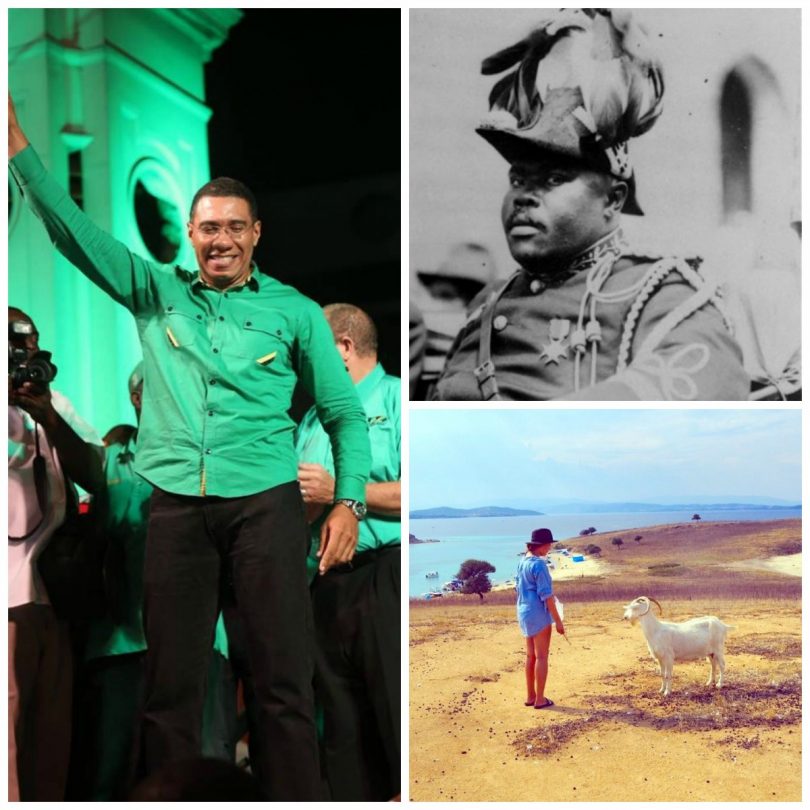 Jamaica saw another eventful year in 2016 with stories involving health threats, environmental issues and development, recognition of cultural heritage, the installation of a new Prime Minister, and commitment of funds to national security efforts, provision of land titles through the Land Administration and Management Program (LAMP), abandonment of the Goat Island project, a government petition to the US to pardon Marcus Garvey, a negative report on violence in Jamaica from Amnesty International, and the 240th anniversary of Kingston Public Hospital. Health authorities braced for an outbreak of the zika virus and recommended that women postpone pregnancies for six to 12 months due to the disease. The government lifted al ban on removing sand in Negril for the construction of a new hotel. The Culture and Creative Industries Policy Division at the Ministry of Youth and Culture started the process to have Jamaica’s reggae music added to the list of the Intangible Heritage of Humanity compiled by the United Nations Educational Scientific and Cultural Organization (UNESCO). Andrew Holness was sworn in as the new Prime Minister. The Tourism Ministry committed funds to national security efforts. Over 200 Jamaicans got titles to land, and the government petitioned the US to issue a pardon to Marcus Garvey. The Goat Island project was scrapped due to environmental concerns, human rights organization Amnesty International issued a report finding that Jamaica encourages a “culture of fear. “and Kingston Pubic Hospital celebrated its 240th anniversary.

JAMAICAN HEALTH MINISTER URGED WOMEN TO POSTPONE PREGNANCY DUE TO ZIKA VIRUS
Jamaica’s health minister advised women to delay plans to become pregnant for the next six to 12 months due to the mosquito-borne Zika virus. The warning was issued before the island had an recorded cases of zika, but its spread throughout the Americas prompted the Ministry to take precautions. Health Minister Horace Dalley believed it was just a matter of time before the dengue-like virus made it to the island. It was already confirmed in nearby Haiti. Dalley stated that pregnant women should take extra precautions to avoid being bitten by mosquitoes. Growing evidence linked Zika to microcephaly, a rare condition in which newborns have smaller than normal heads and poor brain development.

BAN ON SAND REMOVAL IN NEGRIL LIFTED BY GOVERNMENT
Robert Pickersgill, Jamaica’s Land and Environment Minister, withdrew the ban on removing sand from property owned by the Karisma Group in Negril marked for a hotel development. According to Pickersgill, the hotel had obtained a permit and there was “no objection” to the sand removal from the National Environment and Planning Agency (NEPP). The sand, described as carbonaceous material in Llandovery, St. Ann, was relocated in connection with the building of a 4,800-room hotel. There were restrictions placed on the use of that portion of the sand allocated to the St. Ann site, however; it was to be used only to support and nourish the hotel’s beaches.

JAMAICA MOVED TO PUT REGGAE ON UNESCO CULTURAL HERITAGE LIST
Dr. Janice Lindsay, principal director of Jamaica’s Culture and Creative Industries Policy Division at the Ministry of Youth and Culture, announced that a committee has been established to prepare the documents required to have reggae added to the list of the Intangible Heritage of Humanity compiled by the United Nations Educational Scientific and Cultural Organization (UNESCO). Dr. Lindsay said there had been one meeting on the issue to date, which centered on how reggae should be described in the list submission. She cited reggae’s global appeal and need to protect its history as an intangible heritage as reasons to pursue the nominating process with UNESCO.

HOLNESS SWORN IN AS JAMAICAN PRIME MINISTER
Andrew Holness, the leader of the Jamaica Labor Party (JLP), was sworn in as the new Prime Minister, pledging to create partnerships that will position Jamaica as the “center of the Caribbean.” Holness went on to say that Jamaica could not remain satisfied with the status quo and that his dream was to fulfill the dream of Jamaican citizens. Holness called for Jamaicans on the island and in the Diaspora to take part in the development of the country. Sir Patrick Allen, Jamaican Governor General, issued a welcome to Holness and thanked outgoing Prime Minister Portia Simpson Miller for her years of service as well.

TOURISM MINISTRY COMMITED $1 BILLION TO FUND NATIONAL SECURITY EFFORTS
Edmund Bartlett, Jamaica’s Minister of Tourism, announced that the Ministry had allocated $1 billion over the coming four years toward funding security measures as part of the effort to support the Ministry of National Security and its fight against crime. Bartlett made his announcement at the closing ceremony for the first graduating class of 89 students to complete the District Constables Training Program at the National Police College of Jamaica in St. Catherine. The partnership between the Jamaica Constabulary Force (JCF), the Tourism Enhancement Fund (TEF) and the Tourism Product Development Company (TPDCo) was critically important in the plans to enhance safety and security in the resort areas of the island. The new training program was meant to add another layer of security to make existing formal security measures in those areas better and to address cases of visitor harassment.

MORE THAN 200 JAMAICANS RECEIVED TITLE TO LAND
Jamaican Prime Minister Andrew Holness presented land titles to over 200 people who received the titles via the Land Administration and Management Program (LAMP). The initiative was funded by a grant from the Development Bank of Jamaican (DBJ) and seeks to provide 1,200 titles during the 2016-2017 financial year. According to Holness, research indicated that equity in land ownership directly impacts a nation’s overall prosperity. Holness noted that LAMP understood that many issues existed with subdivisions and cultural practices about the way Jamaicans pass on land, and it helped people address these issues through the Adjudication Committee. A draft bill seeking to make the Registration of Titles Cadastral Mapping and Tenure Clarification (Special Provisions) Act more culturally relevant was in the process of being finalized to recognize how land owners give, purchase, and sell land.

GOVERNMENT SEND GARVEY PETITION TO U.S. WHITE HOUSE
The government of Jamaica reached out to United States President Barack Obama in its effort to obtain a pardon for Marcus Garvey, the country’s first national hero.. This was the second attempt by the government to have Garvey posthumously pardoned for a wrongful conviction in 1923/ He was charged with using the mails in a plan to defraud. Garvey was the leader of a mass movement to empower the Black community economically and to achieve independence. He was targeted by J. Edgar Hoover, the head of the US Federal Bureau of Investigation (FBI) and convicted without a fair trial. President Calvin Coolidge commuted his prison sentence. Garvey has been recognized as the forefather of the Civil Rights Movement by Dr. Martin Luther King. The Garvey petition was seeking receive the 100,000 signatures required for a review by the US President.

GOVERNMENT ABANDONED THE GOAT ISLAND PROJECT
Environmentalists were happy that the Jamaican government decided to abandon its plans to give the Goat Islands over to the China Harbor Engineering Company (CHEC) for construction of a $1.5 billion transhipment hub. Prime Minister Andrew Holness announced the change in plans in New York City during a town hall meeting. Holness noted that other locations were available for the project that would not cause as much environmental damage. Conservation biologist Robin Moore praised the decision, stating that the project would have endangered the last habitat remaining for the Jamaican iguana, negating 25 years of work developing a predator-free zone for the iguana on the Goat Islands. Research by firms in the United States and United Kingdom found there were less expensive and less environmentally sensitive sites on which the transhipment port could be built.

AMNESTY INTERNATIONAL REPORT FOUND JAMAICA FOSTERS “CULTURE OF FEAR”
According to a report from international human rights organization Amnesty International, Jamaica encourages the development of a “culture of fear” and police impunity. The report found these elements tied to a high right of killings by police that have gone unpunished for years. Amnesty International noted just two Jamaican police officers have been convicted of murder since 2000, while some 3,000 private citizens were killed in police-related incidents during the same period. Local rights activists made similar allegations against the police for years, and residents in poor communities often protest what they say are unjustified killings by authorities.

KINGSTON PUBLIC HOSPITAL CELEBRATED ITS 240TH ANNIVERSARY
The Kingston Public Hospital (KPH) marked its 240th year in operation on December 14, 2016, and as it did so, its administrators and physicians called for a public-private partnership to help address some of its major challenges. Overcrowding, long waits, and a lack of equipment are familiar problems for the institution, said Dr. Junior Green, a resident in the anesthesia and intensive care department. He noted that Kingston Public Hospital needs someone like “Shaggy” to provide assistance. Recording artiste “Shaggy” Burrell has raised substantial funds for Bustamante Hospital for Children through his foundation. People who benefit from KPH should consider showing their support by creating a relationship between the public and private sectors, Dr. Green said. KPH is the biggest facility of its kind in the English-speaking Caribbean. It was founded on December 14, 1776.