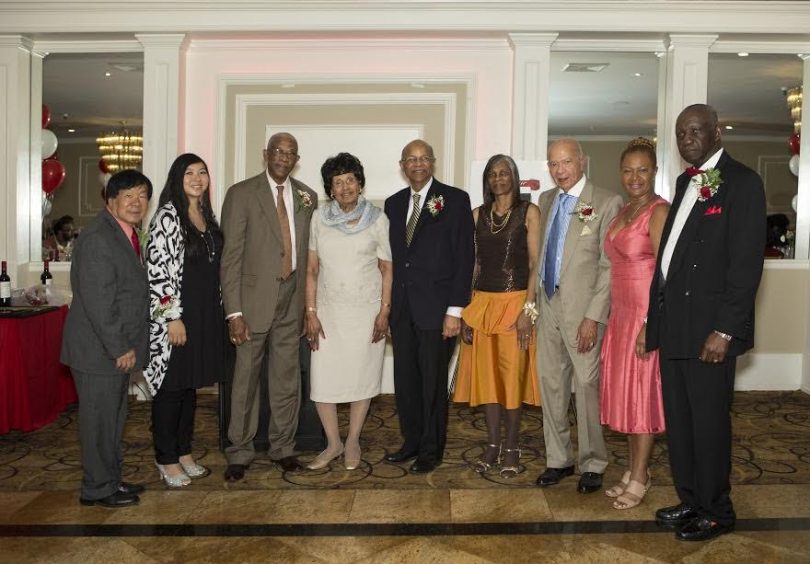 Under the “Distinct Patronage” of Ms. Trudy Deans, Jamaica’s Consul General to New York, the Board Members of the Barbara M. Simpson Memorial Scholarship Foundation gathered their friends and ardent supporters to celebrate its 7th year of awarding scholarships to high school seniors who earnestly and conscientiously sought to pursue their tertiary education. Danielle Clayton, Da’Jour Brown, Jason Perlaza and Brenda Alves were this year’s scholarship recipients. To the delight and utmost surprise of Brenda and Jason, Ms. Peggy Williams, their School Counselor at Mt. Vernon High School, was also present at the function. The Barbara M. Simpson Memorial Scholarship Foundation also notably recognized four adult members of the community, whose drive in their careers and devotion in their volunteer work, had brought them some level of notoriety. Attorney Jeff Barnes received his plaque and additionally, was surprised by his fellow Kingston College alumnus, Assemblyman Nick Perry, with a merited Proclamation.  Hyacinth Bloomfield, Sadie Aarons-Campbell and Basil Wynter were also explicitly and formerly named and acknowledged with the “Community Service Awards.” The Chairman, James H. Alston, Esq. introduced the Assistant Consul General, Darren McCreath who brought a message on behalf of the Consul General, Trudy Deans. Jim also introduced the other members of the board, viz, Rashford Mendes, Dr. Vincent HoSang & Sabrina HoSang-Jordan, Dr. Edward Chambers, Lorraine Smith and Jennifer P. Lumley. Jennifer then read a poem called “The Life of A Soldier,” and she was accompanied by the entire audience. The poem was written as a tribute to Barbara, a soldier and a freelance journalist. Violinist Nadje Leslie at her best entertaining the enthralled audience.

Musical selections were provided by DJ Darryl Burke and special guest violinist, Nadje who played some extraordinary musical pieces to people humming and applauding. Jennifer P. Lumley used the opportunity to make a floral presentation to Sabrina HoSang-Jordan for her help over the years. Sabrina receiving a bouquet of calla lilies from Board Member Jennifer P. Lumley.

The atmosphere was right, the meal was superb and the photographer captured every glorious moment of this notable occasion.

Lumley shared a fantastic and most welcome letter that was sent to the group by a past scholarship recipient, Danielle Lyerly, outlining her scholastic journey since she received the Barbara M. Simpson Scholarship in 2015. Danielle’s mother was present to witness all this as she has been there every year since. A round of applause went up for her.

While dessert was served, raffle tickets were drawn and there were several prizes: bottles of wine, books, cash, gift certificates, gift baskets, floral arrangements and even a television set. The vote of thanks was then given by Mr. Alston for the evening and we all had to agree that, overall, this was another spectacular extravaganza in honor of Barbara M. Simpson. About Jennnifer P. Lumley, the Author
Jennifer P. Lumley is a distinguished Author and renowned Freelance Writer who has excelled in the area as an orator both in the English language and the Jamaican vernacular – patios.

She attended Montego Bay High School for girls and since those early years, has always made a conscious determination to perform above expectation, to orderly arrange to contours of life choices necessary to be more enlightened.

Well-traveled, the Author became favorably disposed to the New York lifestyle and pursued tertiary education at Marymount College (now Fordham University) and has worked for most of her professional career as a Financial Advisor, though her real passion is writing.