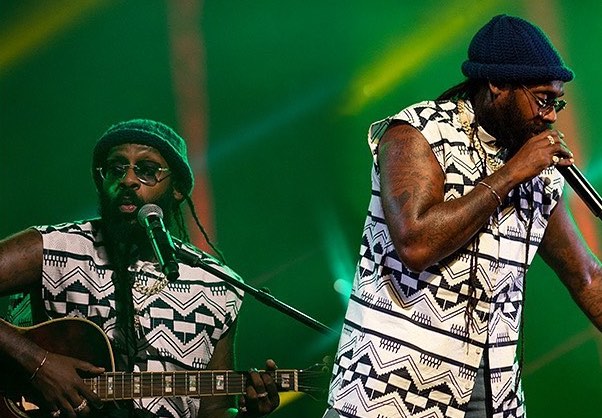 For the first time in its storied 28-year history, this year’s staging of Reggae Sumfest was very different.  Given the ubiquitous nature of the coronavirus pandemic—and the persistent health and economic devastation millions around the globe are experiencing in its wake—Reggae Sumfest 2020 was a fully virtual experience.   In that spirit, the Caribbean’s marquis music festival—also referred to as the ‘Greatest Reggae Show on Earth’—launched into cyberspace from July 20—25, 2020 to showcase and pay homage to Jamaica’s indigenous musical genres.

Back in April, it was announced that there would be no Reggae Sumfest in Jamaica this summer due to the risk factors associated with the COVID-19 outbreak that had tightened its vicious grip in countries across the world.  Then, as the Jamaica Star reported on April 27, 2020 Joe Bogdanovich, Chairman and CEO of DownSound Entertainment, which promotes the annual festival, stated that, “In consultation with the Office of the Prime Minister and the Ministries of Health, Tourism and Entertainment, we must sadly confirm the rescheduling of Reggae Sumfest 2020.  Indeed, that announcement felt like a gut punch—as if the many that had already been doled out by the unrelenting pandemic wasn’t enough—to avid Jamaican music lovers and aficionados the world over who always look forward to the annual “in-person” Reggae Sumfest experience.

But then on July 3, 2020 the pandemic clouds that had cast a pall over Reggae Sumfest 2020, unexpectedly broke by way of an official press release from DownSound Entertainment/Reggae Sumfest titled, “Reggae Sumfest Takes Back Summer 2020 With Major Facebook Collaboration.”  The press release’s opening paragraph read: “The Sumfest team has forged a groundbreaking partnership with Facebook and Instagram to host a virtual celebration of Reggae Sumfest that will potentially reach millions and millions of viewers. A variety of activities will be showcased on Facebook’s platforms celebrating Reggae Sumfest, Jamaican music and culture between 20 and 25 July, a week after the originally scheduled dates for the festival.”  At that, Reggae Sumfest 2020 was on after all, and was to be held by way of a number of virtual events spanning five days—with a two-night concert held on July 24—25th.  Dubbed a ‘Taste of Sumfest’, this year’s festival delighted audiences around the globe with one-of-a-kind access to: exclusive artist interviews, professional panels (for content creators), spotlights from past performances of various big-name reggae and dancehall artists, as well as live performances to cap off Sumfest’s week-long itinerary of festivities. 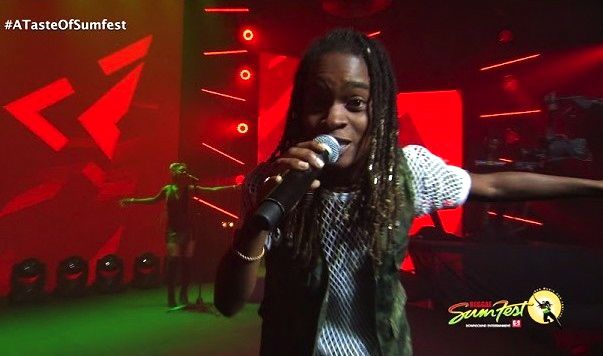 The legendary duo, Chaka Demus & Pliers, took fans down memory lane with their seminal hit song—‘Murder She Wrote’.  As for Tanto Metro & Devonte, they got things heated up pretty quickly in delivering ‘Gyal seh wooee (seh so)’ on Dave Kelly’s 1998 bouncy ‘Bookshelf’ riddim.   They then took the energy of their set up another notch with the infectious ‘Everyone Falls in Love’.  Veteran deejay, Frisco Kid, did his thing on the classic ‘Joyride’ riddim.  Ishawna showed out with her provocative and racy hit song—‘Equal Rights’.

Shenseea, Teejay, Ding Dong (and Ravers Clavers)—all of whom fall under the umbrella of Romeich Entertainment  and its brand—gave exciting and high-energy performances as well.  And for those viewers who were looking for a healthy cardio-exercise routine, Ding Dong and his Ravers Clavers dancing crew certainly went to work in putting their amazing dance moves on display for the virtual audience.  From ‘Flairy’ to ‘Fling Yuh Shoulda’, to the ‘Genna Bounce’, Ding Dong and his dancing syndicate did not hesitate to simply go all out ‘pon di Sumfest 2020 program’!

Agent Sasco—formally known as Assassin—delivered great performance also and, by so doing, unleashed ‘Ruffest and Tuffest’ on the clap-happy ‘Diwali’ riddim.  But it was his song,titled, ‘Loco’ that went over really well as the viewer comments scrolling up the screen were being entered in many cases as hot fire emojis.  Konshens definitely showed his maturity as an artist since emerging onto the dancehall scene a little over a decade ago. He certainly let off some big tunes ‘inna di night’, such as ‘Gal A Bubble’ and ‘Bad Gal’—which he recorded on the ‘Overproof’ riddim.

Feeding off the brilliant energy of the previous evening, Reggae Sumfest 2020 Night II brought to center-stage acts such as Tarrus Riley, Freddie McGregor, Sizzla, Gyptian, Maxi Priest, and Koffee—aka ‘the Grammy Kid’.  Indeed, Gyptian energized the Night II vibe nicely with his monster hits—‘Beautiful Lady’ and ‘Hold Yuh—from his early break-out years in the business.   As expected, Maxi Priest and Freddie McGregor brought nuff’ oldies but goodies into the mix from their long-spanned careers and vast catalog of hits.  Maxi’s ‘Closer to You’ was particularly delightful as it sparked a feeling of nostalgia among the sea of virtual viewers, since the tune brought them back to those golden days when Maxi Priest and dancehall icon, Shabba Ranks, were a fierce musical tandem with several cross-over, mainstream gems.

Freddie McGregor, Captain of the ‘Big Ship’, sailed smoothly atop the rhythmic reggae music sound waves with his timeless classics, such as ‘Just Don’t Want to Be Lonely’ and ‘Push Come to Shove’.  All the while, a mellifluous saxophone melody echoed in complement.  Not surprisingly, those beautiful notes emanated from the saxophone instrument of the iconic Dean Fraser, who made several appearances throughout the Sumfest Night II festivities —including his instrumental rendition of Jamaica’s national anthem at the start of Night I.  Mr. Fraser’s partner in crime, Tarrus Riley—affectionately known in reggae music circles as ‘Mr. Singy Singy’—reeled off a bag of his hits in short order, including his new track called ‘Healing’.

In bringing Reggae Sumfest 2020’s virtual experience to an emphatic close the ‘Grammy Kid’, Koffee, gave a splendid performance in dishing out ‘Rapture’ and her infectious hit— ‘Toast’.  What’s more, Koffee—who early this year won the Grammy award and was the youngest person and only woman to garner the accolade in the Best Reggae Album category—performed her latest hit ‘Lockdown’ which is a song that relates to the experience of the of the COVID-19 pandemic.  Lastly, and arguably the best performance of Sumfest 2020 was given by none other than Sizzla Kalonji—who hails from the gritty Kingston community of August Town.  Prior to Sizzla’s fiery stage performance, there was a short video segment showing all the work that he is doing to build up his neighborhood and permeate it with positivity, including several projects aimed at creating employment opportunities for the underprivileged youth in August Town.  In terms of Sizzla’s actual performance, it was lit up by hit after hit, such as ‘Give Me a Try’, ‘Solid As a Rock’, ‘Good Ways’, and ‘Get to the Point’—which was marked by Sizzla jumping all around the stage!  Following his great showing, Sizzla proclaimed himself as ‘Mr. Sumfest’ and commented to the Jamaica Star in his post-performance interview that:  “Sumfest is a very beautiful festival, a well-planned show with many talents from all over Jamaica. This is where they come to show off that talent to the world, and so I’m always happy to be a part of it.”

As it happened, Reggae Sumfest 2020 opened its virtual doors to Jamaica—and its unmistakable brand of music—to over 360 million viewers all told.  Without a doubt, this year’s cyber-events offered an authentic musical experience for devout lovers of reggae and dancehall music—which, needless to say, originated on the beautiful Caribbean island of Jamaica.  Big up Downsound Entertainment, all the featured artists, all the promoters, and all the sponsors for making Reggae Sumfest 2020 happen amid the global scourge of the COVID-19 pandemic—which we all needed a damn break from!